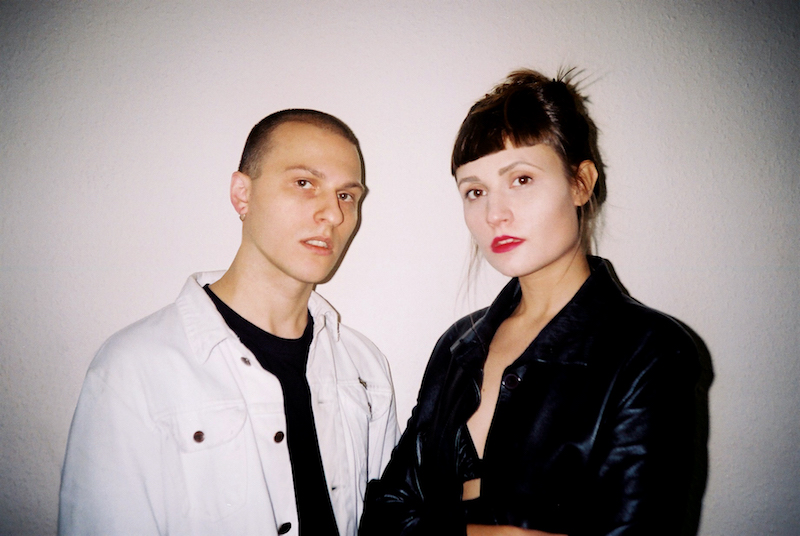 After releasing the first tranche of their new double sided single a couple of weeks back in the form of the upbeat and post punk inspired ‘Diluted’, Manchester based art duo Luxury Death have completed the process by delivering its deliberative and canny flip side, ‘Kids Of The Club’ complete with video. Lyrically defiant at its core, musically it is probably most reflective, alongside the title track from their debut EP Glue, of their punk and pop tendencies and the pseudo-goth like undertones that have been ever present musically to varying degrees since Meg Williams and Ben Thompson, partners in both love and art, started the project early last year. ‘Kids In The Club’ is also arguably their most spacious creation to date marked by a consistent unity that is strangely, only forged through the acute distinctions achieved by compartmentalising and highlighting both instrumental and vocal elements.

Whirring organ like synth melodies, a muscular and enveloping bass sound full of depth and a determined and powerful beat are all employed to memorable effect. They provide a hypnotic and infectious platform that is nicely decorated by cannily constructed and perfectly restrained guitar work and topped off by dual vocals characterised by both their counterpoints and harmonies.

The artistry that Williams and Thompson employ in Luxury Death’s songwriting extends beyond music into design and their love of the music zines of yesteryear. So much so that they’ve teamed up with Desire Press and a variety of other local artists to create Digital Ceremony, a substantial 52 page zine to accompany the musical release. According to its creators, it focuses on and contains;

“harsh graphics, bold photography & subliminal messages, Digital Ceremony explores ‘Kids of the Club’, the celebration of dystopia, the resurrection of utopia, and aims to respond to fringe life in a digital age.”

Digital Ceremony is limited to just 70 copies on its first run so if you want it, get in quick here while the double sided single is out through PNKSLM Recordings and available here. Listen to both tracks and watch the Lucas Chemotti directed video for ‘Kids Of The Club’ below.

Kids Of the Club

From the double sided single, ‘Diluted/Kids In The Club’, PNKSLM Recordings.

From the double sided single, ‘Diluted/Kids In The Club’, PNKSLM Recordings.