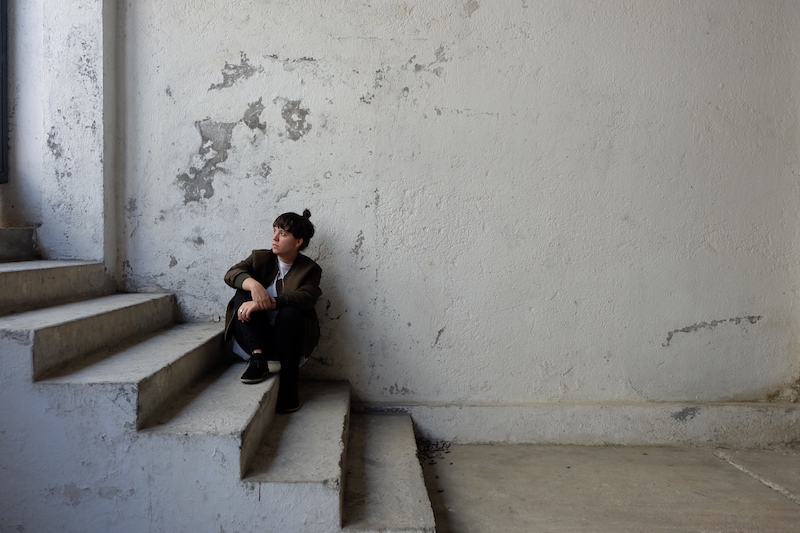 Montreal producer, vocalist and multi-instrumentalist Marie-Hélène L. Delorme aka FOXTROTT has released a new single ‘Wait’ the first cut from her forthcoming EP Meditations I and the first in a series of three to be released over the remainder of this year. The raw sound of the percussion is noticeable immediately as the kick sets the laid back tempo. The groove for the track is established by a delectably rickety snare and old school hats as playful bass lines and horn and string based synths fulfilling different roles keep it company. All elements fall in behind the insistence in Delorme’s hook filled vocal delivery, the track’s undoubted highlight. Of the tracks positive air she has said;

“Wait is a movement forward towards a brighter place, an urgency to follow the tingling feeling one gets when something or someone rings true to them, calls them. It’s a commitment to make oneself available to this renewal, and being willing to leave things behind by doing so. It’s a feeling of love so strong that one cannot ignore it or deny it. Musically, it is a warm pulse, a grounded but expansive energy. It’s drums and bass that pull you forward by your stomach, and shimmering synths and percussions that tickle you in this march forward, like the feeling of a new love. Vocally, it is intimate and upfront, with no “vocal makeup”, like the voice of a loved one murmuring in your ear…”

Delorme’s production chops are well known to those who traverse the electronic landscape but the most impressive aspect of her work here is both its originality and her ability to garner a homespun earthy sound from traditional instrumentation and situate it seamlessly alongside electronic aspects that appear with considerable polish. In fact its hard to tell where either start and stop. Meditations is her first music since her 2015 debut album A Taller Us and understanding the modus operandi of its development cannot be done without understanding its artistic relationship to that album. Writing A Taller Us enabled Delorme to achieve a catharsis of sorts and clear away some of the difficulties she faced at the time.

“It was emotionally dense, and it turned out to be a very healing process. After that whole cycle of producing, releasing and touring A Taller Us, I found myself at a different, more peaceful place.”

The personal growth she experienced meant she was able to create, produce and record these EP’s free from burden with a clarity and an outward focus that wasn’t possible before. The interesting mix of sounds and approaches that appear on the tracks across the three self produced EP’s were developed in isolation on retreat in southern Mexico and the freedom from the writing process is palpable. Just from hearing ‘Wait’, there is a immediate difference in feel and form to her music that presents with equal clarity and you’ll find connecting to it instant and effortless.

Meditations I is out on June 15 on One Little Indian.

From the forthcoming EP, ‘Meditations I’, One Little Indian. Out Jun 15.