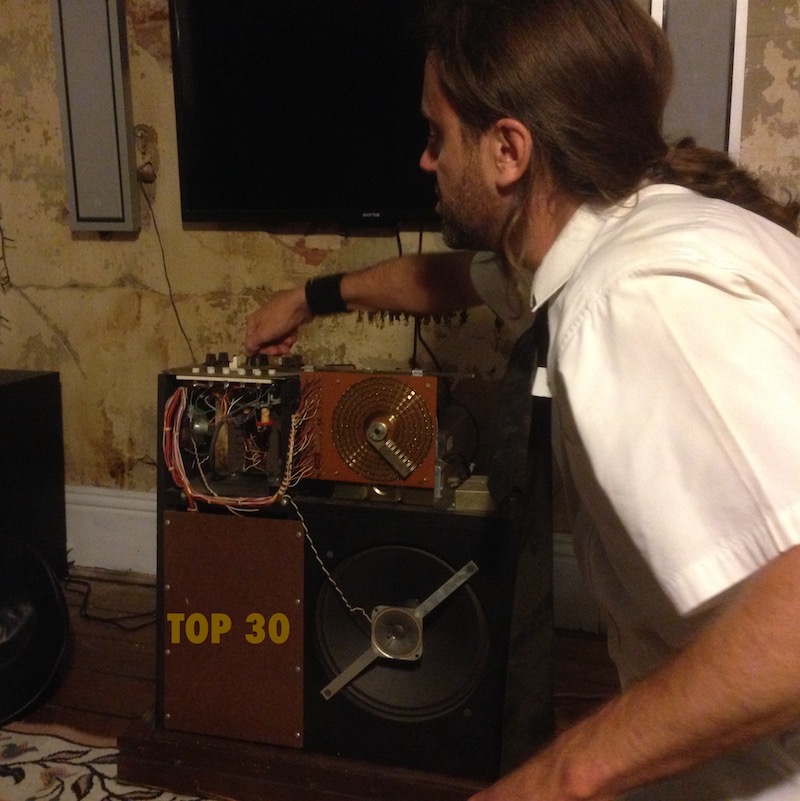 Photo: The lovely Josh Quinn of Adelaide’s Vintage Vulture cranking up one of the earliest drum machines.

THE TOP FIVE: After weeks in the chart Spanish techno producer Juan Rico’s Architectural project finally ascends to his rightful position at Number One with ‘Romanticism Movement’, a slowly constructed eleven minute masterpiece of delicately nuanced techno. It’s from his A Girl With No Friends EP released in August. The mechanical power of ‘SHULULULU’, the title track of the new EP from Swedish duo and left field techno experimentalists SHXCXCHCXSH is at Number Two. Fred Thomas lifts seven spots to Number Three with the salient post rock infused lament ‘House Show, Late December’ from his recent Indie30 Album of the Week Aftering. Marie-Hélène Delorme’s, aka FOXTROTT‘s full album Meditations I-II-III  comes out tomorrow and arguably the poppiest thing she’s ever released ‘Deliver is at Number Four. Rounding out the Top Five is Japanese electronic producer Shinichi Atobe with the first of the four part odyssey ‘Heat I’ off his exquisite new album of the same name, another last week’s Indie30 Album of The Week.

NEW ENTRIES: There are just far too many amazing tracks out there at the moment across the many genres we trade in for them to hang around the chart too long. With that said, there are eleven new entries this week taking in everything from Techno, Electronic Pop, Post Punk, House and more. They are in chart order as follows;

BIG MOVES: Bassackwards from Kurt Vile from his forthcoming album Bottle It In (Matador) enters the Top 10 at 8 while Frozen Honey from Single Lash from their forthcoming album Providence (Holodeck) moves from 30 to 11. The final of the big movers is from Xi’an’s Endless White 无限白 with the mathematical shoegazing closer ‘Hit By Me 你被我浪漫’ from their debut album Flow West To You which moves up 11 spots from 29 to 18.

Our own Indie30 playlist counts them down to your right of screen while the Spotify equivalent below counts up. Either way you decide to count them you will what we believe are 30 crackingly diverse tracks. Enjoy!

Every Wednesday for nearly 10 years we’ve shared the chart our blog is named after, our signature Top 30 highlighting our favourite new independently released tracks of the week, FOLLOW on Spotify for the weekly up’s and down’s and in’s and out’s!