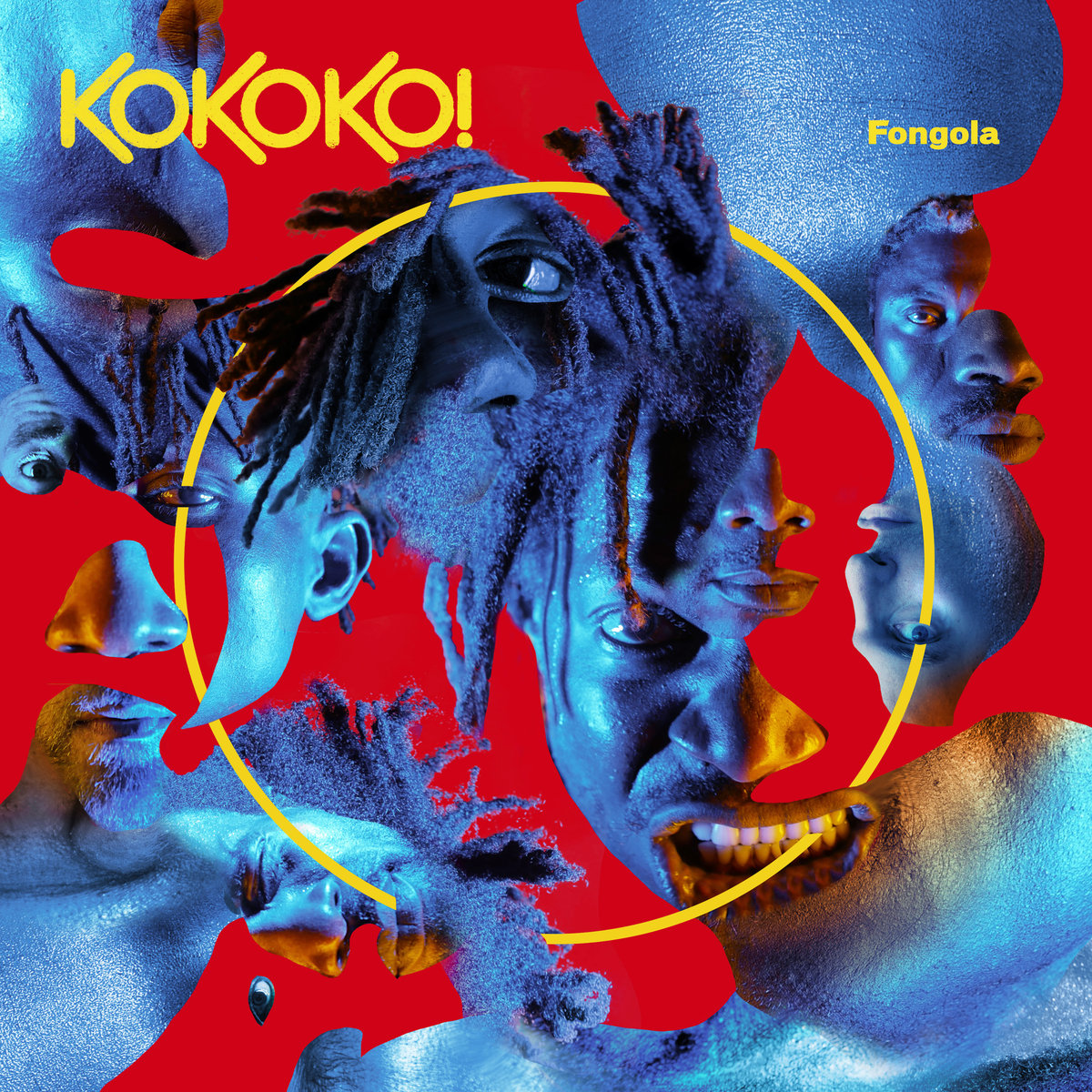 Fongola (The Key) is the debut album from DIY electronic and experimental quintet KOKOKO!. Made up of four Congolese artists, Makara Bianko, Dido Oweke, Boms Bomolo and Love Lokombe and veteran French artist/producer Xavier Thomas aka Débruit, they form just part of a wider 70 member DIY arts collective from the Ngwaka and Lingwala neighbourhoods of Kinshasa, the capital city of the Democratic Republic of The Congo. The group began in 2016 cutting its teeth on inventive DIY instruments and creating music possessing an unashamedly raw party sound that at its core is driven by rhythmic elements of African and electronic music, a combination they dubbed tekno kintueni.

The approach was as much about necessity as it was about a determination to be DIY and like many in their homeland, the band often struggled to make ends meet, a situation referenced on the albums’ second track Azo Toke’ (Money Problems). Due to impoverishment and a lack of available and affordable musical equipment the band employed objects as diverse as homemade guitars adorned with a bike brake cables as strings, layers of drums and percussion created from tin cans and plastic milk cartons and a kick made from part of a ventilation system as well as audio jacks and car engine parts for effects and even a talk-box made from a car stereo cassette.

This lack of economic opportunities in a country ranked 176th out of 186 countries on the Human Development Index is a situation that has its roots deeply embedded inside a toxic mixture of historical and contemporary factors. Firstly, mass exploitation and resource theft, racism, wanton cruelty and a mixture of ineptitude and neglect suffered under Belgian colonial rule, which was arguably the worst of Europe’s colonial invaders, hardly creating the conditions for stability post independence, a stability it undermined the moment its rule playing a significant role in the murder of the country’s first Prime Minister Patrice Lumumba. Since independence in 1960, the country has been largely dominated by incompetent, corrupt and dictatorial rule, for 32 years by Mobuto Sese Seko, a despotic kleptomaniac who looted the country and then for 18 by the recently deposed Joseph Kabila, who ran the country as his personal fiefdom. Kabila’s father Laurent-Desire held the Presidency for the 5 five years in between until his assassination in 2001. All ran repressive regimes and in the case of Mobuto, an authoritarian cult based around a vain persona. Mobuto and the Kabila family amassed a fortune while in power and while Kabila has brought some investment in from namely China, apart from those of his family and supporters, living standards have actually dropped. The average Congolese earns between $700 and $800 a year.

And as did the Belgians, those regimes continually fomented, played and fuelled ethnic tensions through a combination of divide, rule and favour policies and the apportioning and withholding of resources at whim which led to almost constant animosity and conflict, multiple civil wars and thousands of deaths. This has all taken place within the context of a world economic system always hostile to the long term development of Africa, one determined to keep the continent’s resources flowing at low cost. Governed by corporate capital for corporate capital, the rules have always been stacked in favour of the highly developed over the lowly developing and set up to reward the extractors (US, Europe and China) and exploit the extracted (Africa). And this has had dire consequences post-independence for many African states and their diverse populations, especially the peoples of the DRC.

Thus, given the larger political, economic and social context behind the country’s impoverishment, it is unsurprising that the macro-politics and how that plays out on the ground in their local context have fed the musical and political influences of the band. Inspired by the angst ridden, semi-detached resistance and independent nature of post-punk, no-wave, psych, hip-hop, their material is a fusion between the interpretation and subtle manipulation of elements from within these genres and the employment of house, techno and electro dance rhythms. These are then positioned and vice versa within a number of Congolese musical styles whether it be through “zague” influenced vocals, the local kintueni style or wider elements borrowed from Afropunk, Afrofunk and Afrobeats. How these elements merge and travel together is the key to understanding KOKOKO’s music and what they mean by tekno kintueni.

But don’t be fooled into thinking that because of the paucity (or plethora?) of equipment or myriad of influences that Fongola is a work of improvised chaos or that it is impenetrable in any sense. The call and response mantras and constant shifts in melodic  and rhythmic focus may create the false veneer that a “seat of the pants” type spontaneity is at work. But step back and it will become apparent that while the structural detail in each track is deliberately complex and will naturally rest occasionally on polyrhythmic time signatures set against themselves, it is also clear eyed in its intent and deliberately accessible.

In addition to his role as band member, the arrangement and studio work done by French member Xavier Thomas aka Débruit is crucial here. During a visit to Kinshasa in 2016, the well travelled producer joined the band after meeting and jamming with Bianko (vocals. percussion), Oweke (guitar), Bomolo (bass) and the late Bovic Mwepu, the bands original drummer, who sadly passed away recently with Lokombe his replacement. Thomas, utilising vintage analog instrumentation contributes beats, electronic effects and production. The stars aligned in the sense that the Congolese quartet wanted an outlet and a way to express their disparate musical influences while Thomas wanted to further deepen the considerable understanding of African music and Kinshasa’s “sound of the the street. To produce the band’s debut, Thomas spent several stints that ran into months in a Brussels studio sorting through distinct and diverse material the band contributed during sessions recorded in makeshift studios in both Kinshasa and the Belgian capital.

The precision with which inherently oppositional musical ideas are structured is immediately apparent in the seamless way that genres coalesce and styles intersect, overlap and combine. The unlikely blend of electro elements, kosmische musik and a Bateke funeral chant come together in complete harmony on opener ‘Likolo’ (Morning Light or Dawn Sky) while on ‘Kitoko’ (Beauty), a slowed down old school house riff and a straight dance beat is accompanied by while a powerful guest vocals, wiry post punk guitars and avant-garde synth. The pluralistic ways in which the band apply a hypnotic character to proceedings is equally impressive. Witness the similar effect that is achieved from the wildly different shape shifting musical complexities of the aforementioned ‘Azo Toke’ compared with the use mantras and Mongo folk on ‘Tsongos’a’.

While a thrilling ride musically, the subject matter that KOKOKO delivers throughout Fongola is at once resistant, defiant and celebratory presented confidently as a kind of self-help or note to self handbook of future possibilities. Not only is the the love, honour and respect afforded Mwepu in the music felt keenly but it must be remembered what the project has been trying to do all along and that is to forge diverse new musical paths and build relationships across cultural divides based on inclusivity understanding love and and respect. An aim especially appropriate given the diversity that exists in the Congolese context and the many ethnic conflicts that have arisen since independence.

On the track ‘L.O.V.E.’ respected Congolese singer Rachel Nyangombe assuredly handles the notion of and need for its universal application while on the excellent ‘Identite’, the band stress the need for individuals and indeed the country at large to develop strong identities rooted in inclusivity, mutual regard and a shared history of resistance and struggle, qualities that can only come complete with the development of a positive self-concept. And that is difficult to achieve in a troubled multi-ethnic state that saw 250 ethnicities and 700 languages geographically thrown together based on maps drawn in the European metropoles, maps that would eventually become the colonial borders of the Belgian Congo and that of independent Congolese state. In this environment, fomenting and playing on fears and creating divisions is easy. Resisting it is not. Not easy when wracked by poverty and a quest to simply survivem but it is that defiant ongoing resistance and common struggle among all its peoples that should ultimately be the driving force behind the nation’s collective unity.

A shared sense of the struggle to survive amidst the contemporary difficulties is another source of unity to draw upon and tracks like ‘Likolo’ and ‘… offer an observational like insight into surviving life in Africa’s third largest city. Their punk aethestic comes through most clearly in their swipe at the morally and ethically vacuuous nature of corporations on closing track ‘Tokoliana’ (We Are Eating Ourselves), which they initially released as a single with L.O.V.E. on the flip in 2017 as they did with ‘Tongos’a’ & the aforementioned ‘Likolo’.

The ingenuity present in Fongola’s simultaneous utilisation of African invented and European adapted rhythms and the new percussive and rhythmic intersections they have created would be enough to be waxing lyrical about as a phenomenon or an aspect of an album in its own right. But it is more than that. An album of meticulously constructed compositions, mesmerising in its diversity but also intoxicating in its unity.  Unlikely combinations of genres and styles are delivered with an energy and verve suggestive of a determination to be heard above the din and a supreme confidence in the material. It allows KOKOKO! to convey a clarity of purpose that not only represents a unique interpretation of disparate influences, sounds, styles and genres but brings them together in a way that truly crosses continents and connects peoples and cultures. Inspiration and utility has always been the measure of a great album. That Fongola was created and delivered from a place of such struggle with originality and the requisite authority makes it all the more greater.

Watch KOKOKO! perform ‘Malembe’ and ‘Tokoliana’ live below. Fongola is out now on Transgressive Records. Buy a copy here.