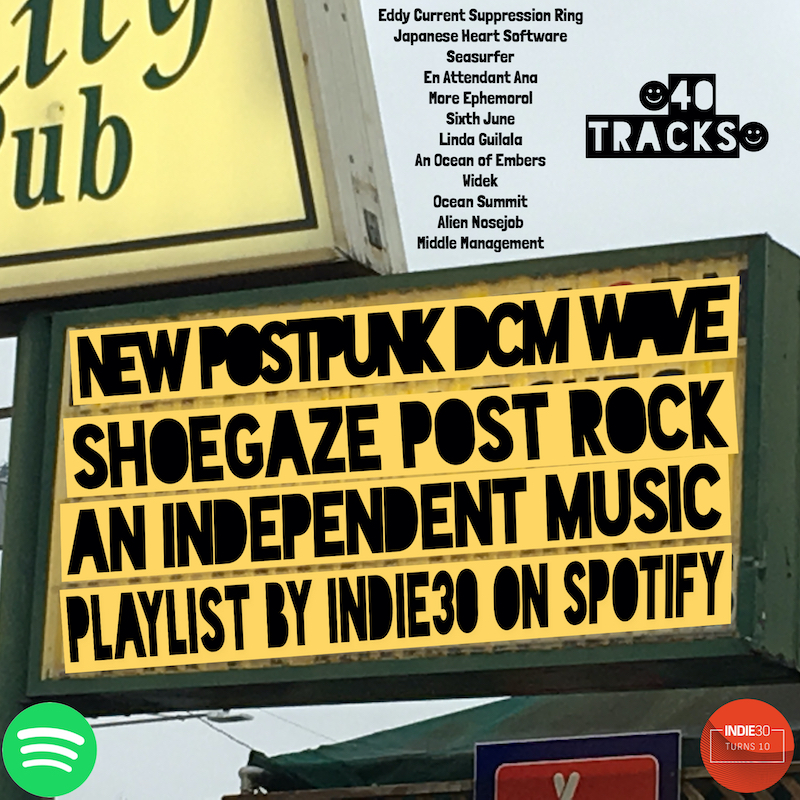 We end 2019 and our New Post Punk (D&C) Wave Shoegaze Post Rock Playlist on Spotify on both an instructive high and a bit of a bonus in the form of 10 extra tracks to add to the usual 30. There was a few tracks back in October and November that we missed so we decided to extend things here. Make sure you go deep and check out the last 12 tracks – you will not be sorry!

We can think of no better way to begin the 40 track playlist musically or thematically other than to provide Melbourne post/garage punk luminaries Eddy Current Suppression Ring. an opportunity up front to deliver their acerbically accurate commentary on the current sad and sorry state of humanity with the gingerly insistent ‘Medieval Wall’. It’s from the politically savvy treatise on modern living, All In Good Time, the super switched on quartet’s fourth record and first in a decade.

It’s immediately evident the critical teeth they bared then have been sharpened further by their subsequent observations of the shitshow since. The album exposes in turn all that is wrong with our culture and governance and lays bare the harsh truth resulting from a gradual, asleep at the wheel like handover of full control and power to big capital, big corporations and big technology. We are now firmly installed behind a seemingly innocuous but in fact metaphorically speaking impenetrable and inescapable corporate controlled wall of technology.

A wall built and reinforced by the thoughts and actions of big capital and their right wing allies in government who adhere to a triumvirate of economically, politically and socially ascendant ideologies and practices that have threatened our very humanity since the 1980s; neoliberal economics, corporate governance and information and surveillance technology. It’s not like the good guys are in charge of technology’s trajectory. They might be making it but they ain’t drivin’ it. While the use of word “wall” in the title suggests we are going nowhere fast the allegoric presence of the term ‘medieval’ in the song’s title suggests we’re regressing.

Given that corporations can be seen as the new churches of the West. Just as the Catholic Church was voracious in using the Bible and the inquisition to demand obedience and the ability to control and amass huge wealth, the corporation has the nefarious teachings of neoliberalism and technology. The former to drive further individualisation and compartmentalisation over community and collective and continue the transfer of public and public services into private hands and private profit, the latter to keep tabs and ensure a compliant and cowered workforce. While a lot less painful than the physical tortures of the medieval inquisition, the modern day psychological torture associated with the anxiety and disingenuous nature of being constantly tested, measured and second guessed by dry data sets and  technological systems has the same chilling effect in curtailing dissent and independent thought.

Like the Inquistion’s claim to drive out evil, the claim that technology would make our life easier has actually done the opposite and some in creating massive human resource industries and systems to measure, monitor, distress and exhaust a society under surveillance and “performance management” like never before. For all of these reasons and more, the thought provoking manner and return of Eddy Current Suppression Ring  is both salient and welcome.

Japanese Heart Software is the dream pop inflected solo project belonging to fellow Melbourne artist Nat Chippy, the lead guitarist and singer of Melbourne band VIM, whose latest delay drenched single ‘Waiting’ featured here until today. The beguiling ‘Holiday’ with its unsettled and unfulfilled nature speaks somewhat to the above and sees her enlist the backing vocals of Alastair Douglas, the songwriter, vocalist and multi-instrumentalist behind Adelaide outfit Blush Response. His subtle contribution together with the trajectory of the bass line brings the desired harmonising effect to Chippy’s hushed and dreamy vocal.

Across the remainder of the 38 tracks there’s a pretty even split across all genres and associated styles this playlist trades in and of course many examples of crossover between all four. Loosely speaking then we’ve got diverse Post Punk from Paris outfit En Attendant Anna, Melbourne’s Middle Management, the angled complexity of Chicago post-punk/shoegaze/math-rock hybrid Gentle Heat, Berlin’s Gewalt, Portsmouth raised quintet Hotel Lux, Toronto’s Sicayda, Stockholm’s A Projection and Clunes (Ballarat) punk outfit Alien Nosejob.

Finally, and we know this genre gets the rough end of the stick proportion wise in this playlist most of the time but there’s some reasonably sized Post Rock action to finish the year with. We’ve play-listed five new tracks released across the last month, the first being ‘Moscow, North Pole, Vancouver’ coming from the excellent new album Lost Happiness by the Moscow outfit Powder! Go Away, one of the best exponents of the genre and known for their economy and punch. There’s a stellar contribution from Gdańsk multi-instrumentalist and producer Maciej Dawidek aka Widek, melodic beauty from Vasteras (Sweden) quartet Feed Me To The Waves, and a deep angular cut from Boston band Pray For Sound . The post rock action ends with an absolute jaw dropper called ‘Detour’ from Dallas/Denton quartet Only Ever. It’s from their new four track EP, Daily.

Access the final Post Punk DCM Wave Shoegaze Post Rock Playlist on Spotify at the link above or in the embed below and look out for our post on this playlist’s edition of our Tracks of 2019 Series over the next day or two.