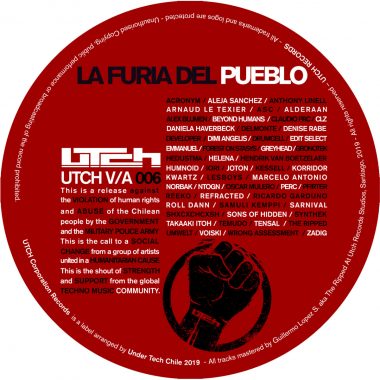 “The rich and powerful are the ones who’ve thrown the first stone. They discriminate against us, despise us, leave us without education and healthcare. That’s much more violent than destroying a bus, throwing stones or writing graffiti on a wall.” Chilean Youth to Al-Jazeera.

In recent months millions of Chileans have taken to the streets in mass protests calling for urgent action to address the country’s systemic inequality, the worst in Latin America*, which has left its education, health and pension systems unable to cover basic needs and half the population earning just above the minimum wage. Against the backdrop of a neoliberal economic agenda of austerity and privatisation by the socially conservative right wing government of Harvard educated billionaire President Sebastián Piñera, a fare hike on Santiago’s metro system back in October sparked a sustained campaign by thousands of disaffected young people at the end of their tether that involved fare evasion and once confronted running battles with police that involved significant property damage.la Furia de la juventud!

The subsequent calls from the wider population in mobilising for progressive social change, included the reversal of public transport fares, education, healthcare, and pension reform, better wages with a rise in the minimum wage, justice and equality for women and respect and protection of the country’s indigenous peoples. Having been called on to resign, Piñera answered the protests by declaring a state of emergency and announcing widespread curfews. Accompanying this was a violent crackdown by the police and military not seen since the last phase of military dictatorship in the 1980s under the odious Augusto Pinochet.

The subsequent violence left 29 people dead, 11,594 injured and resulted in the arbitrary detention of 28,000, of whom 1,500 remain in pre-trial detention under the auspices of a state security law left over from the Pinochet dictatorship. According to the UN Report handed down last month, there is evidence that police met the protests with live ammunition and in general maximum “non-lethal” force including indiscriminate use of anti-riot shotguns with rubber bullets, tear gas and arbitrary detention involving interrogation, intimidation, threats, beatings and torture. Chastened by events, the reluctant Piñera orchestrated the removal of eight of his ministers and eventually accepted calls to hold a national referendum on a new Constitution in May.

In response to the situation, two months ago Santiago based techno imprint Utch Records representing Chile’s techno community began compiling a monster of a compilation album titled La Furia del Pueblo (The Fury of the People). The result sees a more than sizeable group of esteemed international techno artists coming together in solidarity with and support for the people of Chile, not only in protest at the government’s violent actions, neoliberal economics and social inertia but to play a role in the greater movement towards far-reaching and systemic progressive social and economic change.

“This is a release against the violation of human rights and abuse of the Chilean people by the government and the military police army. This is the call to a social change from a group of artists united in a humanitarian cause. This is the shout of strength and support from the global techno music community.

La Furia del Pueblo is an album that we have been working on for almost two months in which artists from different places of the world have collaborated, to demonstrate the union and support that is being given to the people from Chile, who has been fighting and demanding dignity; but at the same time being vilely repressed by military and armed police that has abused and violated human rights in countless occasions, the current government and particularly President Sebastian Piñera being the absolute culprit of everything that has been happening.

This release aims to make all this go out to the world and that people know that we are united and support this type of instances. Money left by the sales in digital format of these tracks will be given to people in a street situation in the form of food and shelter, since they are the most unprotected, because they have absolutely no help from anyone. We will do this work with our techno family and friends, as we have done since the movement started, there are many ways to help and this It can be one more.

It is time to give a furious shout through techno music and show that we are more than just parties and drugs as they usually stigmatize us. La Furia del Pueblo is a shout of strength and support from several of the most influential artists of techno music.”

French support comes from Zadig, Umwelt, Arnaud Le Texier and Voiski while Portugal’s Temudo and Nørbak and Germany’s Denise Rabe, Synthek and Refracted are also on board. Italian producers Wrong Assessment, Claudio Prc and Emmanuel contribute tracks as does Japan’s Iori and Takaaki Itoh. Slovenian producer Clz along with UK artists Perc and Edit Select and American’s Developer and ASC do too. Mexican producer and Illegal Alien head Ricardo Garduno has lent his support as has Finn Samuli Kemppi and Dutchman Dimitri Angelis. It’s a diverse assembly.

La Furia del Pueblo is available to purchase digitally here and will be released to streaming services this Friday 17th January. Listen to the powerful final track ‘Trickledown’, a veiled swipe by Acronym at the utter pittance the ideology of the rich neoliberalism, has given the world in exchange for our dignity, self worth and very humanity. All proceeds go to provide food, shelter and support for the homeless in Chile. Total solidaridad!

*Despite having one of the highest per capita incomes in Latin America, Chile is among the countries of the region with high levels of inequality. According to ECLAC, wealth in Chile is highly concentrated. In 2017, while the poorest 50% of households owned 2.1% of the country’s net wealth, the richest 10% owned two thirds (66.5%), and the richest 1% accounted for 26.5%

Emma Shields Debuts On Stay Inside Compilation; Songs From The Great Indoors