RECORD REVIEW: JOANNA NEWSOM (USA) – HAVE ONE ON ME 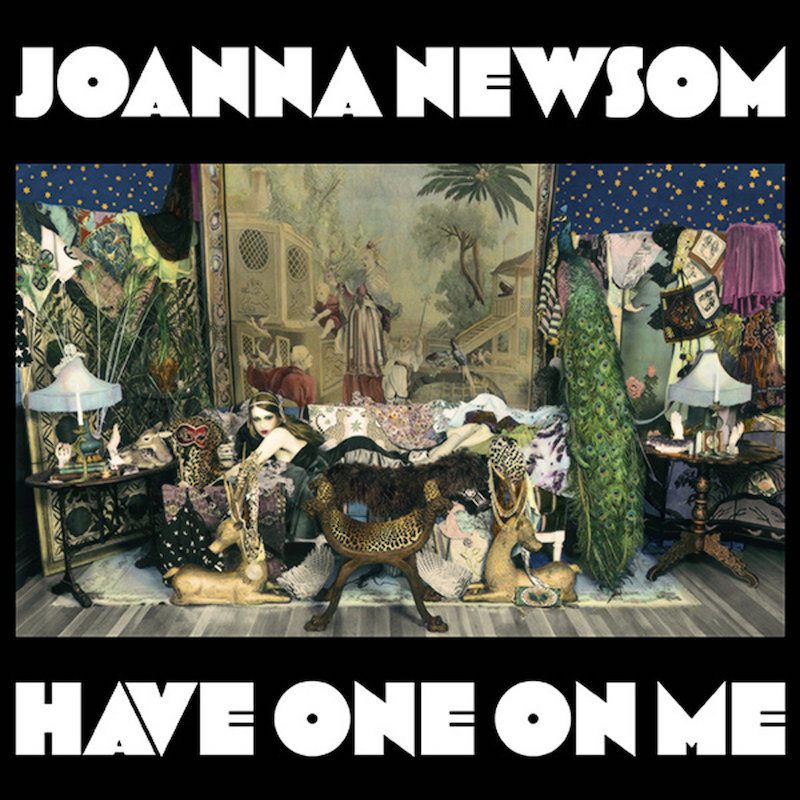 RECORD REVIEW: JOANNA NEWSOM (USA) – HAVE ONE ON ME

The new triple album from Joanna Newsom, Have One On Me, all things being fair and equal, should put her high up among the very best solo artists of all time. Sure, she’s not going to sell truckloads of albums but critically Newsom has hit the upper stratosphere with this recording. Put quite simply, Have One On Me packs more into a record lyrically, musically and emotionally, than any artist has, male or female, for many years. While the harp is still the central element and there are many references to debut The Milk Eyed Mender and the ambitious follow up, Y’s in both a vocal signature and musical sense, structurally and melodically, this third effort stretches beyond both of those releases in its depth and clarity. There is also something organic and natural about all eighteen tracks and nothing seems forced or overdone.

Just take a listen to the epic eleven minute title track on which Newsom’s harp is accompanied by what only can be described as a mini orchestra with instrumentation as widely diverse as the artists imagination. A Bulgarian Tambura, a Kaval, a Tarhu and a Kemence sit alongside the more tradiitional piano, oboe, bassoon, trumpet, horn and violin. With Ryan Francesconi at the helm arranging and conducting though, the relentless arrangements of Van Dyke Parks have been replaced by time and space, giving the track the room to breath that is necessary to feed Newsom’s emotionally driven lyrics and vocal arrangements. What also transpires in thinking as the track travels along is the subtle percussion arrangements by Neal Morgan, a highlight on the album throughout.

‘The Good Intentions Paving Company’ is a standout among standouts and one of the more accessible and straight ahead tracks on an album that still, as Newsom is want to do, confounds and eludes. Her piano provides the base as Neal Morgan’s drums pound along interspersed with with quiet and poignant moments giving creedence to the space aforementioned as Newsom plays on words in lines such as ‘It had a nice ring to it, when the opry house rang, so with a solemn auld lang syne, sealed, delivered, I sang’. Vocal dexterity is also on display as she alternates between four or five incarnations of tone.

Other highlights include the exquisite ode to her home state ‘In California’ which carries evocative imagery and delicate vocals that hint at the nodule issues she reportedly had last year. But far from affecting her voice negatively, the recovery has actually added another dimension to it. ‘Jackrabbits’, a gorgeously sparse song with just harp and vocals is a perfect chaser with a chorus that threatens to open up the tear ducts as Newsom’s intonations insist somewhat unconvincingly that she can move on from a past mistake and love again. The strong second side continues with the heartfelt ‘Go Long’ that speaks of the inpenetrability of relationships.

The third side suffers little in comparison the with the first two and if taken on its own merits as an album in itself it would still attract high praise and be more than worthy of it. ‘Esme’, with its lovingly crafted imagery will stand the test of time and ‘Kingfisher’ reminds of what attracted us so much to Y’s. Have One On Me is a very special recording from a very special recording artist – a triumph of musical and lyrical intelligence and lasting piece of music history that in twenty or thirty years time will be looked upon as having a place high up in the pantheon of the best albums of all time. It’s just that good.