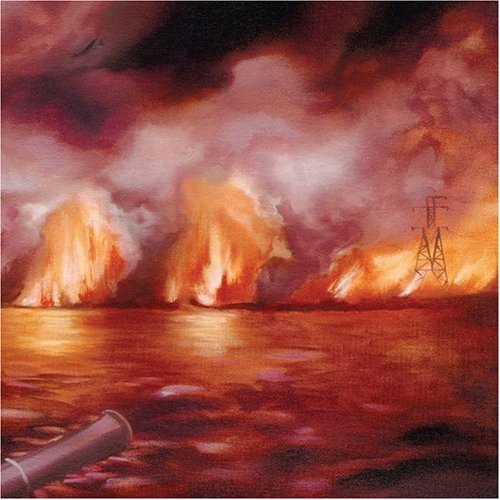 The Montreal indie music scene is a diverse and prolific one, giving us such gems as Plants and Animals, Wolf Parade and Arcade Fire. The Besnard Lakes are no exception with their unique atmospheric take on the world around them conveyed through the lens of their music. Husband and wife Jace Lasek and Olga Goreas have been making their bittersweet brand of music since 2003 with their first LP ‘Volume 1’ released with only 1000 copies (it has since been re-issued in 2007). They released their second album also in ’07 with the title ‘The Besnard Lakes Are The Dark Horse’ which saw it nominated for the Polaris Music Prize, based entirely on merit regardless of sales, genre or label.

This third album sees a beautiful mix of orchestral pop, prog rock, harmonies, honeyed vocal lines, and shoegaze with guitars blazing in one track, languid and (David) Lynch-like in the next, sitting superbly side by side in a way that shouldn’t fit but just does. The Besnard Lakes Are The Roaring Night captures the feeling and essence of their LP title literally,  both musically and visually, with the album cover art despicting a blazing inferno reaching into the dark skies, in a painting that could have been done by Turner (however a massive electricity pylon amongst the flames is a giveaway it wasn’t painted in the early 1800s). The music on this album has the feel of the painting, a kind of anxiety and urgency about it. The apocolyptic, introspective nature of it builds with each listen like an approaching storm.

The album starts with a crackle and static from a radio in part one of ‘Like The Ocean, Like The Innocent’, giving way to Lasek’s falsetto and Olga’s sweet vocals in part two. ‘And This Is What We Call Progress’ show cases Lasek’s vocals and stands out with its catchy, sexy riff, probably the most energetic upbeat track on the album. It’s with the etheral slower tracks that build and build that The Besnard Lakes shine brightest, however. ‘Chicago Train’ is a delicate thing, utilising strings, flute and omnichord to great affect. ‘Land Of The Living Skies’ is the second two-parter track on the album and is another example of how many tracks from The Besnard Lakes have a timeless quality to them. The album was recorded in Lasek’s own studio (Breakglass) using a 1968 mixing desk apparently previously used by Led Zeppelin. Maybe this contributes to the epic classic feel of the album.

Besnard Lake exists, near Regina, Saskatchewan where Lasek grew up. He and a friend started travelling there every summer, and he describes it as  ‘secluded and hard to get to. You feel like you are the only people there’. Their music isn’t quite as hard to reach, but once you find yourself ensconced amongst the roaring guitars, sweet harmonies and walls of sound it’s just as special. The night is roaring and so should your stereo with this album.