RECORD REVIEW: THE TALLEST MAN ON EARTH – THE WILD HUNT

RECORD REVIEW: THE TALLEST MAN ON EARTH – THE WILD HUNT 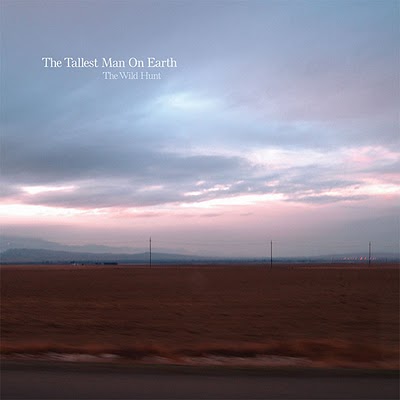 THE TALLEST MAN ON EARTH – The Wild Hunt

In the folk genre generally, much if what is released these days follows a predictable vein where your hard pressed to find any artist that stands above any other. Outside of the strange worlds of Bill Callahan and Will Oldham who largely march to the beat of their own extremely talented drums, there is little to differentiate one from the other. So much so, that it’s been a while since a piece of folk music has done more than just endear itself to me. ‘Oh that’s nice’ kind of thing. So I come to Sweden’s Kristian Matsson, the first folk artist to get my musical veins pumping for a very long time. On his second album proper, Matsson’s musical genius has come to full fruition. Shallow Grave pointed in that direction, but The Wild Hunt is ripe fruit indeed.

The Wild Hunt contains nine acoustic guitar and banjo based tracks and a piano laden closer with each containing carefully and perfectly crafted chord structures that are laced with heart-tugging emotion, each chord change knowing exactly where to go on from the last. Matsson’s gravelly  southern tinged vocals together with the sparse yet strangely pregnant guitar make for a surprisingly big sound that matches his Tallest Man On Earth moniker. While he may sound American on the surface, a close listen to his diction and the words and meaning of his lyrics  will transport you to the Swedish countryside far from modern civilisation where the freshness  of nature pierces and envelops the musical soul. Its like Matsson has got away from it all  while he contemplates the difference between romance and realism and the fragile nature of  existence itself.

On the title track opener he sings;

“And I will sleep out in the glade just by the giant tree, just to be closer when my spirit’s pulled away, I left a nervous little boy out on the trail today, He’s just a mortal to the shoutin’ cavalcade”

and in the chorus there is a resignation to insignificance and fate;

“I left my heart to the wild hunt a-comin, I live until the call, And I plan to be forgotten when I’m gone, Yes I’ll be leavin’ in the fall”

On the standout track, ‘Love Is All’, Matsson seems to be assessing the worth of love, relationships and social expectation;

“Well I walk upon the river like it’s easier than land, Evil’s in my pocket and your will is in my hand, Oh, your will is in my hand”
“And I’ll throw it in the current that I stand upon so still, Love is all, from what I’ve heard, but my heart’s learned to kill, Oh, mine has learned to kill”
“Oh, I said I could rise, From the harness of our goals, Here come the tears, But like always, I let them go, Just let them go.

It seems spurious to highlight any of the ten tracks above any other such is the consistency of the record but nonetheless the wistful beauty of ‘The Burden Of Tomorrow’, the vibrant picking on ‘Troubles Will Be Gone’ and the structural strum behind ‘You’re Going Back’ are worthy of mention. Additionally, ‘King Of Spain’ possesses a powerful optimism while the piano laden escapism on ‘Kids On The Run’ is the perfect way to end a near perfect album.

Lyrically and musically Matsson has put the listener in another space with both up for and open to self-interpretation. Words and music as intelligent and powerful as this album exemplifies come along rarely and must be celebrated. Matsson’s lyrics, sung with gusto, interchange emotionally between light and dark with ease while the mastery of his guitar work means he can straddle the line between carefully constructed picking and violent, visceral strumming just as easily. While there’s little doubt that The Wild Hunt has well and truly put its hat in the ring for album of the year, there is also a feeling that it will achieve the status of being an album for the ages.