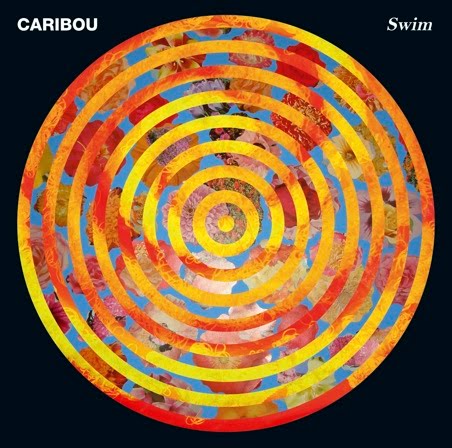 Like Kieren Hebden, Dan Snaith has become a most vital cog in the machine that is 21st Century electro-dance music second decade in. The shimmering sophisication of Swim, his third album under the Caribou moniker is further evidence of an artist taking dance music to places hitherto unexplored. Where as Hebden took us to a terrestrial wonderland, Snaith takes us a subterranean equivalent. The theme of water abounds on the aptly titled Swim, but don’t expect to just dip your toes in a small pond or simply tred water. If you aren’t prepared to or simply can’t swim to this futuristic tide, this album will engulf and drown you in its forward looking embrace. Sure, you’ll find familiar nods to traditional dance sounds and techniques, but unless you are willing to swim with Snaith you’ll fail to appreciate the full ramifications of what has been achieved here.

The strong opener ‘Odessa’, has been making waves since its appearance back in late January as an album taster. It’s pulsating bass line, use of percussive elements and spiralling synths combine to gel in a cyclical way, the perfect way to begin an album that’s trajectory is sonically circular rather than linear. ‘Sun’ continues the journey with its jazz beat backing up a expansive melody as Snaith repeats the title constantly in what almost sounds like an untouchable void. ‘Kaili’ is big on pitch control to lasting effect, a technique that allows Snaith’s more than fallible voice to be the hook that holds the track together. The beat never matures and leaves you never wanting the constant build up to end.

The album’s centrepiece is the clanging ‘Bowls’, a track illustrative of Snaith’s preponderance to use global sounds fused with familiar dance elements. The irresistably catchy ‘Leave House’ with its woodwind inspired melody sitting alongside a wistful yet somewhat unsettling electro bass platform is an impressive piece of songcraft, combining a plthora of different percussive techniques and a myriad of synth sounds.

The dubstep dominated ‘Hannibal’, laden with stripped back guitar sounds and warped synths meld a style that is reminiscent of the recurring thematically contemplative Wim Mertens soundtrack to Peter Greenaway’s 1986 film, Belly Of An Architect. Not content to rest on his laurels, at the three quarter mark, Snaith takes the song out of your navel and into the club leaving your head spinning before bring you back to introspectivity. Lalibela’s reprise of Kaili is the perfect lead in to ‘Jamelia’, the album’s closing track, a mini epic clocking in at a minimal three and a quarter minutes that leaves you wanting more.

Lyrically, the album contains the recurring theme of women wronged, trying to make sense of what life has dealt them and moving on. On ‘Odessa’, Snaith sings;

“She can hold on to her own / If it comes to push and shove”.

On ‘Jamelia’, there’s a frustration and confusion as Snaith laments;

There is a fullness to this record that makes it so good. That Swim equals if not betters its ultra-impressive Polaris prize winning predecessor Andorra is not only indicative of its quality but a celebration of Snaith’s determination to change and grow as a songwriter, musician and producer. To be sure, Swim should assure the electro-dance master another place in end of year top album lists. Majestical.