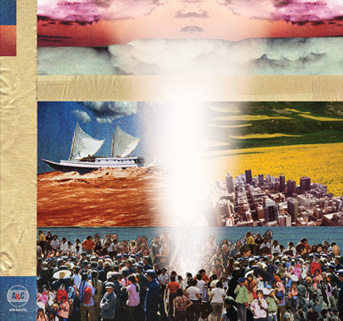 I saw Broken Social Scene when they played Australia’s premier indie music festival roadshow, St Jerome’s Laneway in Adelaide back in 2008. It was a pretty special day for BSS fans as Stars preceded them and Leslie Feist was due to play a solo show later that evening. Which brings me to my point. On at a ludicrous time (2.30 in the afternoon) for such an important and seminal act and given just 40 minutes, Kevin Drew, Brendan Canning and the whole troupe, Cranley, Milian and Feist included, preceded to deliver a big ‘fuck you’ to the powers that be much to the chagrin of event organisers and go 30 minutes over time, putting the entire festival line-up behind time for the remainder of the day/night – loved it!

You may be wondering where I’m going with this and asking ‘what’s a show two years ago got to do with a review of the new album Forgiveness Rock Record? My response is simply, ‘everything’. In the decade since their inception, Broken Social Scene have always played to the beat of their own drum and have never compromised with anyone or anything other than the necessity of having to do so between themselves. They also have a habit of messing with expectation and this happens when self-expression is the reason for artistic existence yet expectation since the aforementioned You Forgot It In People, one of the Twenty First century’s best albums at this embryonic stage, is a constant factor surrounding every Broken Social Scene release. People often ask me what the term ‘indie’ actually means in a musical sense. Rather than answering them straight out I often feel that if I could only get an hour of their time and play them You Forgot In People, the need for a worded explanation would be circumvented and if they don’t get it, well….

Such expectation either increases or decreases after a five year hiatus since the difficult self titled follow up to that seminal 2002 release and I wasn’t sure what I was going to get with Forgiveness Rock Record. ‘World Sick’ was a deceptive first taste, probably deliberately so, with its huge rollicking sound and anthemic feel but confounding people, whether deliberate or not, is in Broken Social Scene’s DNA. There’s a feeling of being overwhelmed at times, but the near-bombast of the music suits the lyrical bent of the track as Drew sings ‘I get world sick, everytime I take a stand’. While ‘World Sick’ is a cracker, a more wider listening audience and voracious record labels are kept at bay by its crashing crescendos and seven minute length. Commercial sabotage, concious or not, has always been a feature of bands approach.

With Drew and Canning still well and truly at the helm duelling as ever the band strips down to six regulars for this release, Charles Spearin (bass and guitar), Andrew Whiteman, Sam Goldberg (guitar) and the ever present Justin Peroff (drums). That’s not to say that other members don’t figure, they do, playing their bit parts at appropriate junctures together with some help from some notable outriders. The band commissioned the expertise of Chicago musician/producer John McEntire (Tortoise, The Sea And Cake) as producer and the record sees important contributions from Sam Prekop (The Sea And Cake), Doug McCombs (Tortoise), Scott Kannburg (Pavement, Spiral Stairs) and Sebastian Grainger (Death From Above 1979). Lisa Lobsinger, vocalist from the vastly underated Reverie Social Revue, is a more than welcome addition to the band proper and her laid back soothing voice well and truly comes to the fore on the excellent, ‘All To All’. This track and ‘World Sick’ bookend the truly outstanding opening five tracks. The synth driven ‘Chase Scene’ has all the hallmarks of conjuring up just that picture in your mind, like out of an old 80’s action movie featuring the obligatory police chase. The instant and irresistable ‘Texico Bitches’ is seemingly a subtle  indictment of big oil, apt especially considering the disastrous situation in the Gulf Of Mexico. ‘Forced To Love’ is a resplendent rock classic, relentless and gritty with a multi-layered attack of guitars served up on a base of keyboards that follow and underpin the vocals.

The impressive trajectory continues with the horn driven blast of Art House Director, a track that’s got Andrew Whiteman’s prints all over it. ‘Ungrateful Little Father’ delves into familial abandonment ‘ungrateful little mother fuck, built you up, a brand new breakthrough device’ and is an appropriate vehicle to contemplate and draw breath ready for the run home.

That run home includes some stunners. The excellently busy instrumental jam of ‘Meet Me In The Basement’  sits uncomfortably but appropriately alonside the floating ride of relationship breaker once removed and Emily Haines sung, ‘Sentimental X’s. Two of the album’s standouts ‘Sweetest Kill and the Prekop sung ‘Romance To The Grave’ follow. The former is a Drew penned slow burner focusing on a lost relationship that is musically complemented by Spearin’s (Do Make Say Think) rounded bass line that ends each run through. The latter wouldn’t be out of place on a Sea And Cake record but is even better with the backing vocals of Milian, Feist and Haines at the beginning building the track up nicely
alongside reverb fuelled guitar arrangements. The immediacy of Prekop’s as always breathy vocals sit beautifully alongside those of the female trio.

While many saw the self titled predecessor as a bit of a mis-step and I’m not going there here, Forgiveness Rock Record will ultimately see Broken Social Scene return to collect the critical acclaim received in the wake of You Forgot It In People. The most lasting and impressive aspect of the album is how the disparate interests of the six main protagonists compete with eachother yet are able to mould a seamless finished product, a product that is disciplined and vital in every way where not one note outstays its welcome. This detailed approach and the bringing on board of McEntire has by sonic evidence given Broken Social Scene a new lease on life. Those lucky enough to catch them on tour over the next few months will undoubtedly see, as I did back in 2008, a band at the top of their game, in love with their music and having nothing to apologise for.