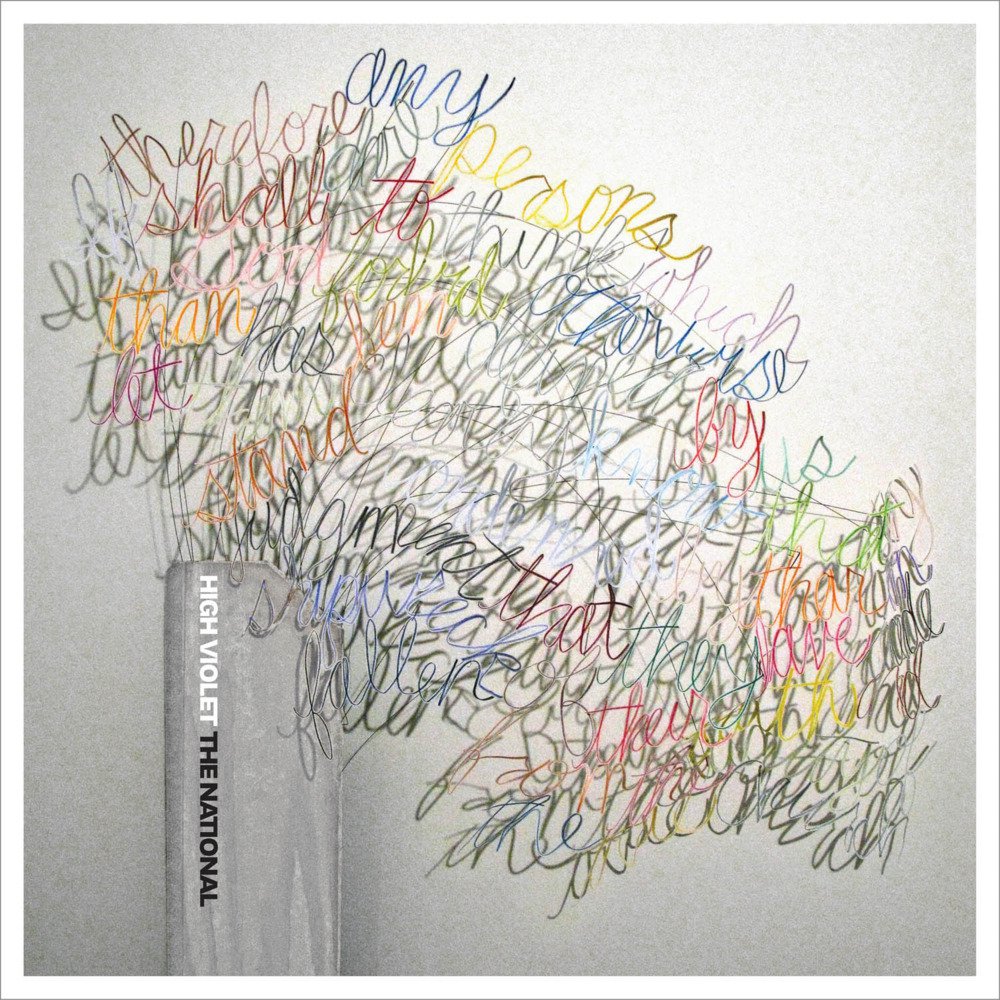 It comes as little surprise that High Violet, The National’s fifth album has skyrocketed into the top echelons of the world’s mainstream album charts, currently sitting at number 3 in the US, number 2 in Canada and 5 in the UK. But don’t fear indie rock brethren, this much deserved success and attention won’t change the Brooklyn via Cincinnati quintet who have never actively sought the limelight. It’s a strength of the current indie scene that no longer do bands of The National’s stature have to go cap in hand to, get on bended knee in front of or take it up the arse from vulturistic and culturally empty record companies. They remain on an indie, label wise and while the inevitably pyrrhic offers mirage style will come rolling in from blank men with blank cheques, we can be assured that whatever the band choose to do, history demonstrates they will do it to the beat of their own drum. For the world is The National’s oyster now, and it has come to them.

High Violet is another slow burning masterpiece that builds on the incredibly strong 2007 release, Boxer. Berninger and the Dessner and Devendorf brothers have an uncanny knack of making simple songs linger yet they never outstay their welcome. It’s amazing what unfolds in the minimalist framework from which they work. The secret lies in how the rhythms, melodies and vocals are cleverly and meticulously arranged. The subtle, intuitive and ultimately constructive guitar work of Bryce and Aaron Dessner, the intelligent percussion work of Bryan Devendorf, one of the highlights of the record, the fully formed contribution on bass of brother Scott (check ‘Little Faith’ together with the orchestral arrangements provided by Padma Newsome, of side project Clogs produces a sound that is unique and owned by no other band. Nothing is left to chance and everything holds together in a form that is organic with an overwhelming air of lyrical honesty. No smoke and mirrors, no gimmicks, no frills and no tricks.

The unique nature of Berninger’s voice has been exhaustively written about and apart from stating its absolutely pivotal role at the centre of The National’s sound, there’s little else that needs to be said. Lyrically High Violet is another personal take on the social complexities of life within and outside of relationships. ‘Runaway’ is about being resigned to a doomed with someone who slowly chips away at your self worth, ‘What makes you think I enjoy being led to the flood’ Berninger sings as he states that he won’t run away from his claustrophobic and helpless situation. Similar is echoed on ‘Conversation 16’, ‘We belong in a movie, try to hold it together ’til our friends are gone, we should swim in a fountain, do not what to disappoint anyone’. This humility and fragility that abounds lyrically on High Violet is most clearly stated on ‘Afraid Of Everyone’ where even drugs won’t overcome, even in the short term, the unspoken fear.

The other noticeable aspect to this album, apart from its quality, is the way The National have decided to present it, that is the clever and deliberative ordering of its tracklist. Unlike most long players, High Violet actually gains strength rather than loses it with each track. Just like within each song with its noticeable build up of tension and emotion, the journey from opener, ‘Terrible Love’ to closer ‘Vanderlyle Crybaby Geeks’ is an exhilarating one that only gets more interesting and endearing with each subsequent listen. The fact that the most intense and emotional tracks on the album, ‘Conversation 16’, ‘England’ and ‘Runaway’ are on its second half means that with each of those listens, the trajectory is always up. Other highlights include ‘Bloodbuzz Ohio’, the album’s most up-tempo track that provides a perfect centrepiece to what precedes and follows and its predecessor, ‘Afraid Of Everyone’ which builds into a maelstrom of reverb that climaxes perfectly.

Its a cliche to say ‘there’s not a weak track on the album’ when reviewing a newly loved long player. In the case of High Violet, the proof will be in the listening years from now as the record is unearthed from said dusty collection and realisation dawns that its importance and worth has probably grown not waned. That’s certainly the case with The Alligator and Boxer and that in itself will be The National’s legacy, longevity mixed with vitality, two ingredients essential to calling a band great rather than just good.