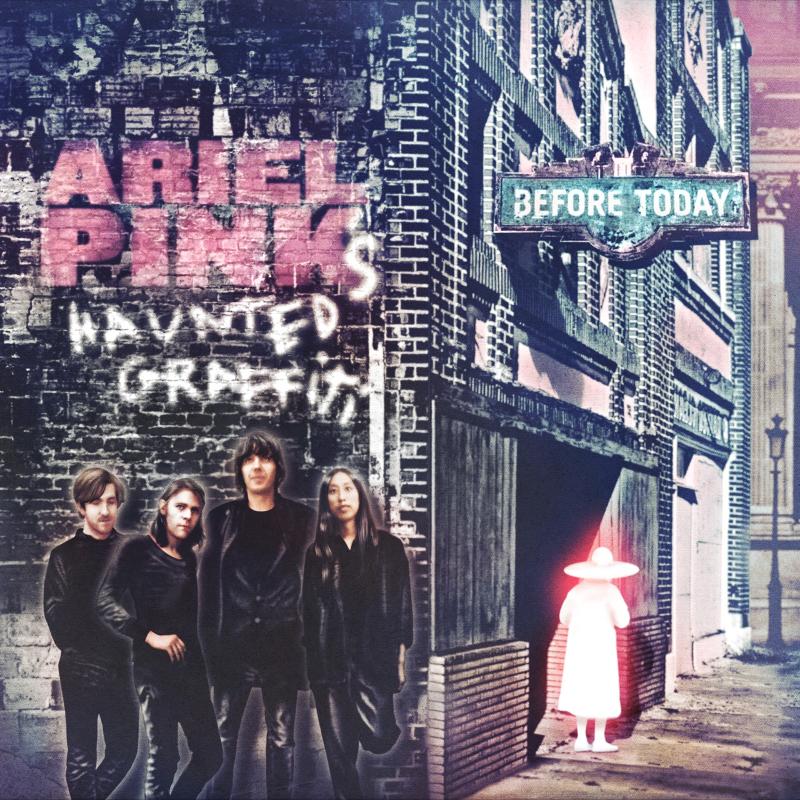 Back in 2005, Ariel Rosenberg, aka Ariel Pink, made a statement about his live performances that in part sums up his relationship up to now with the public domain. The one time recluse told LA Weekly,

‘People boo me everywhere…they don’t even hide their contempt. I’m used to it now. It probably comes from the fact that I’m not very good”.

Apart from being humble and wrong, his self-synopsis however, is true to a point in that it only reveals Pink in a superficial sense. Sure, technically he struggled in those early days due in part to self-admitted laziness but also to a single minded and somewhat stubborn determination to filter his musical learning process from within. Quite simply, he never actually envisaged playing the tracks live and only emerged from the comfort zone of his apartment due to ‘popular’ demand. When creating music, often even getting through one rendition of a creation was hard enough, replicating it live was another thing altogether. His take on his influences was entirely his own though as he squirrelled them away in the inner world of his home and his creative mind and penned hundreds of songs to cassette. When those songs finally saw the light of day to a minimal audience after Animal Collective got hold of a CD-R recording of a collection that would become 2004’s The Doldrums and released it on their Paw Tracks label, Pink had announced himself to the indie world as an excessively, yet inwardly talented creative force prone to master the essence of and then sabotage traditional musical structures and deliberately skirt the edges of listenability. Over the years, everything from 60’s pop, pyschedelia, 70’s AM rock, disco, punk, post punk and 80s new wave and no wave have been given the Pink treatment.

The interesting thing about Pink’s musical trajectory is that all of his music up until recently was written before the Paw Tracks era. Succumbing to writer’s block in 2005 around the time of his sister’s car accident that left her in a vegetative state, all of Pink’s releases since 2004 have been assorted compilations of disparate EP’s and singles. In 2008, Pink decided to embark on a new phase of his career and set about on in his own words ‘get(ting) it together’. His band Haunted Graffiti, made up of keyboardist Kenny Gilmore, guitarist Cole M. Greif-Neill and eventually drummer Aaron Sperske was put together marking the first time Pink had a talented bunch of musicians to assist his creative vision becoming a concrete public reality. The result was a number of kick arse singles that drew the attention of British indie 4AD who backed the collection of tracks that became Before Today, this weeks feature album and Pink’s first record using a proper studio and something approaching modern recording techniques.

What Pink and his band have produced is nothing short of a triumph, successfully scuppering the potential argument of whether or not he has sold out his DIY lo-fi roots. The results on Before Today are clear indications that he hasn’t, all of the cheek and randomness of past recordings are there but what is also present is accessibility in that experimentation and some real coherent and lasting creative quality. The jittery fragility is ever-present as each song threatens to fall apart at the seams, as Pink’s songs have always threatened to do, but they don’t, hanging together as creative tapestries of a by-gone era re-working and re-energising radio rock and pop on a level hitherto unknown. Many of these tracks are in fact re-workings of earlier Pink tracks, namely ‘Can’t Hear My Eyes’, ‘L’estat’ and ‘Beverly Kills’.

Before Today is a confounding listen and it makes twists and turns within songs that you’d never pick or expect. In fact, it takes more than a few listens for the entire thing to start to gelling together. Vocally as diverse as ever in tone and style, musically its a scattered, yet strangely seamless journey through the genres and eras of popular music. First single ‘Round And Round’, a virtually unrecognisable renovation of ‘Frontman/Hold On’ is probably Pink’s most polished recording to date and undoubtedly will figure highly in end of year lists. On the surface its a funky disco number resting its allure on the vocal hook in the chorus. But even here, disaster looms at different times, exemplified by the fact that Pink’s vocals in each verse tend to fade away before lines are completed as if to say, ‘you need to come to me cos I ain’t comin’ to you’. The blink of an eye album opener, ‘Hot Body Rub’ contains a twin sax attack lying over a loose fitting bass line, slightly off drum beat and Pink’s indecipherable vocal echo  and is at once alluring but as dishevilled as ever. What follows is rollickingly brilliant take of the track, ‘Bright Lit Blue Skies’ by 60s group, The Rockin’ Ramrods, a take that sees Pink hit heights of enthusiasm previously unseen. The confounding, ‘L’estat (Acc to the Widow’s Maid) is a undoubted standout, sitting high among Pink’s best ever with its sunny 60s feel juxtaposed with a double time move into 70s pop complete with tinkling ivories that then dovetails into a carousel like synth vortex finishing with a flourish of prog rock that hints at a glimpse of Sky.

‘Fright Night’ sees Pink’s Cure influences come to the fore with the bass line reminiscent of ‘A Forest’. ‘Beverly Kills’ is another highlight with its roller disco synths, funky bassline, tight beat and 80s style hubbub – another accessible single perhaps? However, if your looking at this number to sweetly serenade you musically around the rollerskating rink, Pink aims to set you up for a fall as the sweetness and light descend or ascend into, depending on your point of view, a seemingly without focus stop start timing signature, a myriad of interweaving off kilter vocal renditions of the line ‘can’t stop the press’ and a cacophony of monkey noises. Pure Pink!

‘Butt House Blondies’ is a pure rock gem with its rock out opening and flailing guitar solos but it has that many other influences working away its almost headspinning, from 70s melodic metal to sugary coated yet creepy melodies and vocals that sound at home on an spoof 80s movie. ‘Little Wig’ seems to be a straight out rocker until the progressive rock elements kick in and ebb and flow throughout. ‘Can’t Hear My Eyes’, is a soft rock gem full of starry eyed synth work and pop perfect sax sensibilities, complete with fills from that long lost piece of drum hardware from the 80s, the Roto Tom. The track first made its way to these ears last May as a single and is further enhanced here with adept production. ‘Menopause Man’ may seem like an element of lazy comic relief but there is much more to it than first appears. Its stalking bass and casual vocals that break into a swirl of off beats and synths before the giant chorus kicks in is sheer brilliance. ‘Revolution’s A Lie’ is a stomper of a closer that is almost hypnotic in its metronome nature and through this and its Martin Hannett type interferences has the marks of album era Joy Division all over it.

Before Today as a finished product fully digested brings one back to Pink’s words of 2005. Again telling the LA Weekly,

‘I tell the record company to just get me in a real recording studio…I’ll go into mad-scientist mode, and it will be great. But that hasn’t happened. They don’t want to give me money, because I might release a shit album, which could definitely happen. I’ve got my good days and bad days, for sure. But the best rock & roll is all stuff you’re not supposed to do. Rock & roll is the history of rules being broken and people taking chances.”

For various reasons it took Pink another five years to br presented with and take the opportunity to get into that real recording studio and take that chance and boy he did not waste it. He has done what is extremely difficult to do in music and indeed any artistic pursuit, he has taken his music in all his lo-fi DIY glory off to get a spit and polish but instead of coming out all shiny and new has simply grabbed the tools himself and deliberately left more than a few scuff marks. Before Today is new but not that new, an exit but not really a departure and definitely not a sell out as many old fans may attest. Its simply an improvement, an improvement that sees the encyclopedic experimental pop master at the top of his game.