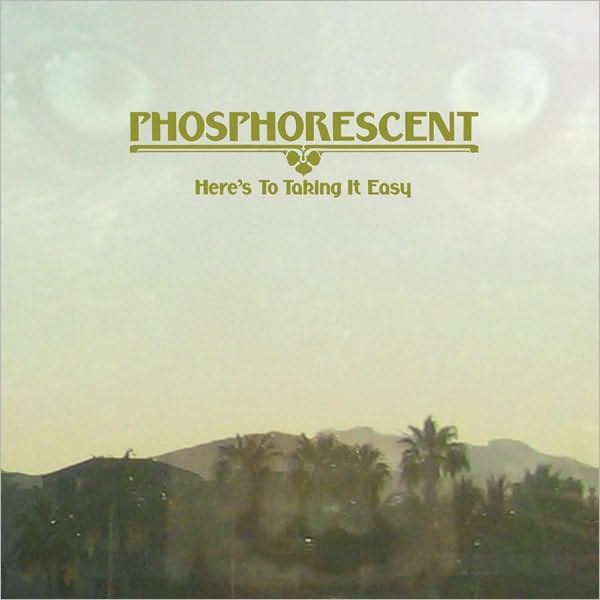 PHOSPHORESCENT – Here’s To Taking It Easy

I’ve always been amazed how the genre of country music can often manage to mask the emotional pain of lost love with music that is joyous and uplifting. There’s always an air of optimism in the most harrowing of tales, if not lyrically then certainly music wise. Here’s To Taking It Easy, the fourth (or fifth if you include To Willie) long player from Athens, Georgia native Matthew Houck under the Phosphorescent moniker, while the tales are not harrowing, can certainly be described in these terms. Not a straight up country record in any traditional sense in that it combines pop and rock sensibilities and after all is an indie record, Here’s To Taking It Easy has an air of positivity on the surface and despite the difficulties life throws up, Houck advocates the useful adage of just getting up and getting on with it. There’s a sense of fallibility in these songs but also a sense of the subject knowing how to cope with his shortcomings, at peace with who he is. Even a cursory glance at the subject matter of each track reads like a highly effective, highly confident coping mechanism. Houck’s Phosphorescent moniker is certainly appropriate.

That mechanism surfaces when speaking of his own insignificance on ‘Nothing Was Stolen (Love Me Foolishly)’;
‘so apart from the things I touched, nothing got broke all that much’

The tale of life on the road and having to neglect that significant other is the subject of ‘We’ll Be Here Soon’ but Houck insists on giving time the arse and insisting to his partner;
‘raise your glass and raise it more, and praise and laugh and praise some more, and you know, we’ll be here soon’.

Heartbreak is all over ‘The Mermaid Parade’ but similarly self re-assurance aids the subject of the song to overcome his wife’s infidelity;
‘…and yeah I found a new friend too, and yeah she’s pretty and small, but god damn it Amanda, god damn it all’.

In fact, you get a sense that no matter what happens, Houck is resigned to the randomness of life’s journey and there’s little point in worrying about things you cannot alter. Witness ‘I Don’t Care If There’s Cursing’, the ultimate lyrical lesson in shoulder shrugging. Come what may indeed.There’s even resignation hanging leaden over ‘Tell Me Baby (Have You Had Enough) as the protagonists life in bars on the road is taking more than a toll on his relationship. The rhetorical question is consistently asked ‘But tell me honey have I gone too far’. The answer is known before the question is asked and an answer is not required. At the same time, there’s little sign that the eternal tourist is going to change his ways. That theme of road and relationship is continued on ‘Heavin Sittin’ Down’ and the outcome is the same.

This theme of leaving things to fate is somewhat challenged on the Neil Young inspired final track ‘Los Angeles’ where Houck roasts those music heads in the industry who trade in lies and deceit in search of the all mighty dollar. But here, there’s no shrugging of the shoulders but a firm determination to succeed on one’s own terms;
‘Said I ain’t coming to Los Angeles baby, just to die’.

The lyrical themes are complemented by the uplifting and optimistic nature of the music, undoubtedly Houck’s strong suit. The southern character in the musicianship on Here’s To Taking It Easy is more than evident and first class in delivery. Each riff, each lick, each slide foray paints a panoramic picture of open wide vistas giving the sense of a nine track road trip of regret yet resignation. Houck even takes New York’s Coney Island to a rural setting on ‘The Mermaid Parade’ and seemingly shouts Alabama’s worth from the rooftops of a Brooklyn bar on the album’s opener.

While every track excels on this record, the inclusion of the chant-laden ‘Hej I’m Light’ adds another dimension. Houck and friends repeat the mantra over and over again in joyous strains throughout the four minutes while a simple bass note rings out amid canoodling guitar and a laconic and hypnotic beat. Whenever I hear it, I just imaging grabbing come close friends, downing a few beers around the fire in
the middle of winter and giving the collective vocal chords a damn good workout.

Sure, Houck’s not going to win any prizes for orginality and his influences are clear for all to see but he has put together a package of tracks that have a seamless quality and Here’s To Taking It Easy is a true album. Witness how We’ll Be Here Soon’ melts into ‘The Mermaid Parade’, I need not say no more. The change in musical direction that began after the release of the introspective Pride in 2006 and first surfaced in his tribute to Willie Nelson last year has seen Houck add a new vitality to his music and leaves us waiting rather impatiently for where he’ll head next. Wherever that is, you can be sure that he’ll get there under his own steam.