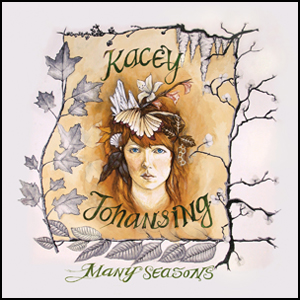 I’m not a fan when it comes to the music of Rickie Lee Jones or that other more recent Jones, Norah. Sure, they’re great at what they do but their style is just not my bag. Why then am I attracted to the music of Kacey Johansing, who has been compared in a vocal sense with these artists and others and on the surface shares many of their qualities. Quite simply, Johansing, for me, manages to circumvent the sleekness and showiness that characterises those artists and offers something that seems more earthy, more real. You just get the feeling that if Johansing was being discussed by the big men of music for a possible record deal, they wouldn’t really know what to do with her. “Sure, great voice but what’s with the lyrics? And what about how she jumps all over the place with genre and style. She’s got no formula, where’s the formula, How do we sell that?”. The fact that Johansing has managed to take a scattergun approach in this context but still has produced a very cohesive record is not only testimony to her undoubted talent but also her ample music intelligence and awareness. She has a unique understanding of what works but at the same time is not afraid to take risks – no safe formulas here.

The 25 year old American singer songwriter has been somewhat of a journeywoman having grown up in Colorado, moved to Boston and now is firmly planted in San Franscisco, a fact which peppers the album and informs much of its trajectory. She has surrounded herself with an army of erstwhile collaborative talent,
French singer-songwriter Vera Gogh, fellow San Franciscans Sleepy Todd and Matt Adams (The Blank Tapes) lend a hand but what strikes most is the proficiency of the assembled studio musicians who bring a discipline to the imaginative song structures.

Combining elements of traditional folk, jazz and blues with contemporary indie pop, Johansing employs melody to great effect as witnessed on the title track where the hypnotic piano mixes with the strings to great effect creating a atmosphere bordering on the wondrous, yet strangely unnerving. Sitting alongside this is a subtle, hardly heard guitar contribution that serves to unsettle and its this attention to detail and effect that elevates Many Seasons above the mire of sameness that can afflict the music of similar artists. ‘Angel Island’ has been a staple on this sites music chart over the last couple of months with its laid back style and understated chiming guitar hook.

Johansing’s impressive vocal talent comes to the fore on the beautifully spartan ‘Leave Your Sweater’ and the two step, whistler, ‘Oh Brother’ happily ambles along until prized open and briefly transformed by a key signature change. This ability to subtlely change direction albeit for a brief pause and thus totally transform a song is difficult to pull off but Johansing manages it here and to greater effect on ‘Same Old Same Old’. Even where she veers away from her pop influences and moves into the jazz and blues realm, ‘Photgraphs and Letters’ and the aforementioned ‘Same Old Same Old’ she doesn’t lose me. I must say, on first listen that almost happened but staying the course was easy in the end.

On the surface, lyrically Many Seasons seems innocent enough, playing at times like a ode to San Francisco and other geographical points but the dark noir styled ‘Spider Song’ is indicative of Johansing’s  depth as she creates an metaphorical moonlit image in which she croons in cathartic celebration as she watches, in delight an ex-lover sink.

The most noticeable thing about Many Seasons is the unnoticeable. It’s almost as if what Johansing doesn’t do is as important as what she does. The use of her exquisite voice is a case in point. Where other artists undo good work by overworking their manifestly talented pipes, Johansing gives of those just what’s required, never overwhelming the beautifully crafted arrangements. Her voice is just one part, albeit an important one, of the whole and the fact that she is obviously acutely aware of this makes her music the better for it. Three years in the making, Many Seasons is a outstanding debut album to savour on so many levels, a collection of songs that show off, not only Johansing’s practical and writing abilities but also expose her ability to nail the intangibles that sets great music apart from the good.