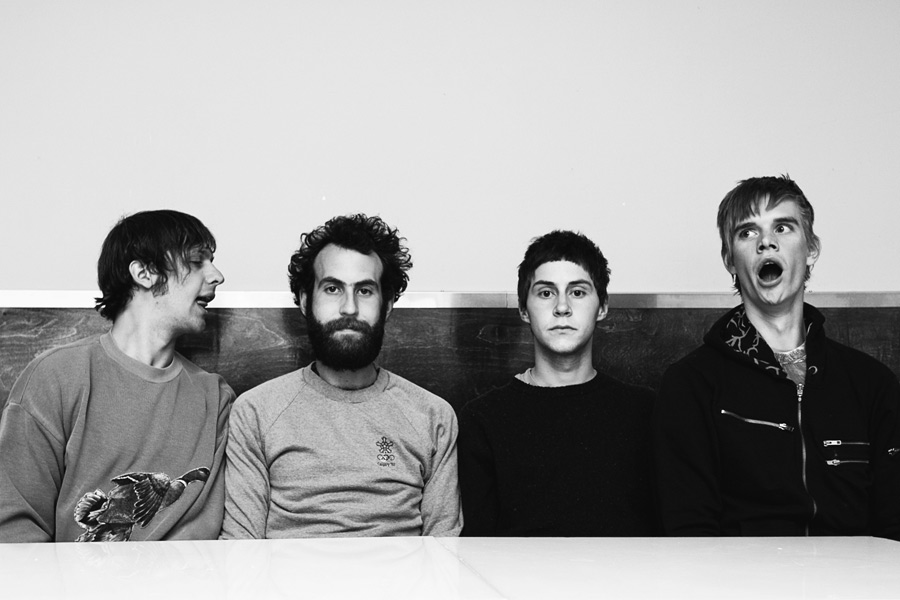 Calgary four piece, Women, emerged in 2008 to critical acclaim with the release of their self titled debut album. Now they’re back with the follow up, ‘Public Strain’. We spoke with guitarist Pat Flegel a couple of week’s back about the development of the band and its live performances, the forthcoming album and the machinations behind the songwriting and recording process this time ’round.

JAMES: Hey Pat. We’re really loving the new album and the single ‘Eyesore’ is number one on the Indie30 chart at present, and we intend on making Public Strain the feature album this week. It’s definitely a progression from an impressive debut and in our view one of the best this year. How do feel now that’s its finished and your on the eve of its release?
PAT: I’m actually really happy with it. But I’m one of those people that tear everything apart, everything we do especially creatively, I appreciate you guys are enjoying it, thanks a lot. I’m really looking forward to getting on tour again, it’s kind of like I’m in limbo being here (in Calgary), don’t like being here for an extended period of time. Touring doesn’t feel like travelling and I look forward to playing the songs and putting on more of an engaging show… maybe like a boy band and use some pyrotechnics, make up etc..

JAMES: The album is released in the UK and Europe and internationally next week, we’re curious about the timing of that given it’s a month before the release in Canada. Is there a reason for that?

PAT: It mainly has to do with synchronising the tours. We’re going to the UK shortly after it comes out; I think that’s why they did it.

DAVE: We’re wondering about the title of the album, Public Strain what’s the meaning behind it, any political or environmental connotations?

PAT: Definitely not, we’re not a stance band, its just the title, we about avoidance and not explaining things, without being condescending to the listeners, some people think we are…

JAMES: What’s the focus lyrically this time round for the album? It’s hard often to make out the lyrics and know what you’re singing about, but if you’re in the business of being a bit cagey about that, that’s fine

PAT FLEGEL Yeah, I don’t know, it’s…we just put it out there and we just hope people get into it …. I think we’re going to release the lyrics on the internet or mail out, it mostly revolves about being paranoid.

DAVE: With so much great music coming from the northern extremities of the world, we’re wondering if its about the cold dark winters, being together inside discussing music, is it conducive to creating good music and is Calgary, the geography there, part of that?

PAT: It’s interesting, there’s no massive community, it’s not like Montreal where there is more going on, more interaction there for some people (but here) you’re more productive because there’s less distraction, its definitely more conducive, I mean when it’s so cold outside and you’re holed up what else are you going to do?

JAMES: When you began recording this album after the success of the first one, I have read somewhere about critics are not really your bag and you don’t care what they say, but how much pressure did you put on yourselves to build on the first album and what was that impact on the song writing process this time round?

PAT: We’ll record something one day and think its amazing and the next day we hate it and we won’t show anyone, sometimes you think too much, honestly I would make something that I would want to listen to, just trying to please ourselves, it’s a bit of a process, it’s a product of having too much too much time on your hands.

JAMES: Did you put any pressure on yourselves to step it up this time around with this album?

PAT: Absolutely, any time we record something we want it to be exceptional, something that’s unique, we put a tremendous amount of pressure on ourselves, I think we manage, we just really love playing.

DAVE: The different ways you have recorded your albums, using lo-tech equipment and then going into the digital environment, is there a different vibe in the studio when you’re working with the different formats?

PAT: Absolutely, when you are recording to tape that’s it, I guess there are more options when you’re recording digitally, it’s one of those things where you only use what’s available to you, sometimes you do vocals on the computer available. It’s pretty incredible what you can do with editing and stuff… but we’re not purists, it’s more what you can do with that machine, you know. With recording it’s just a different format, it’s the same attention to detail, one’s not superior.

JAMES: This album for us, definitely retains that hypnotic feel from the first album, it feels like you all get into a zone almost like a trance thing going on, you certainly get that from listening, is that close to accurate when you’re going through your songs?

PAT: Yeah, absolutely, having all the sounds you can get, you get into a state, like a really strange place where you don’t think about anything else, it’s amazing…after it’s done you’re exhausted…

JAMES: The album seems to be a bit fuller in sound this time round, musically seems to reflect a little more light and warmth in the tracks than the debut, was that a deliberate aim or did it just organically happen?

PAT: Yeah it was a very organic process songs and arranging them, we took our time….a good majority of this record we just went in without knowing what it was or what the arrangement was, it says a lot about  Chad’s patience and we were just basically practicing, I like doing that as well……sometimes there were times when we were just checking levels and ended up using it , I’m interested in that as well (like with) Penal Colony …checking the mike levels, the same thing with the outro ……..

DAVE: We were wondering about the unusual ways you went about the recordings, especially with the first album, outside and confined spaces, is it hard to emulate that sound when you are playing live?

PAT: Absolutely, it takes a lot of extra machines, which is something we are working on, it can be extremely difficult especially when want to represent the songs you are playing to fans, to make this feel this is cool every time, that it’s represented in a certain way. We are definitely manipulating things more and more with a mixture of instruments, machines, tapes, not even trying to really emulate it just trying to do the same thing as with the recording, to sound urgent, I just like hearing things change, to be really wild and then really quiet…tension and relief..

JAMES: I notice that you mention you were rather inconsistent as a band when you started touring the first album and playing live around that time. You’ve toured extensively over the last 18 months across Europe and everywhere else, how have you seen the development of your live performance since those early days?

PAT: It’s just about repetition and repetition, doing things over and over again, and after any given night talking about it and making alterations, and hopefully you get to that place where you don’t have to think about the way you play every night.

DAVE: And just one last question, do you guys have any plans to come out to Australia? Do you have anyone in Australia who takes care of that, who can organise a tour?

PAT: We are planning on going there, there has been talk of us going to Japan, and sorting something out. We don’t currently have anyone out there representing us*.

*That’s should be a message to Australian promoters/record labels – pull your fingers out and get in contact!