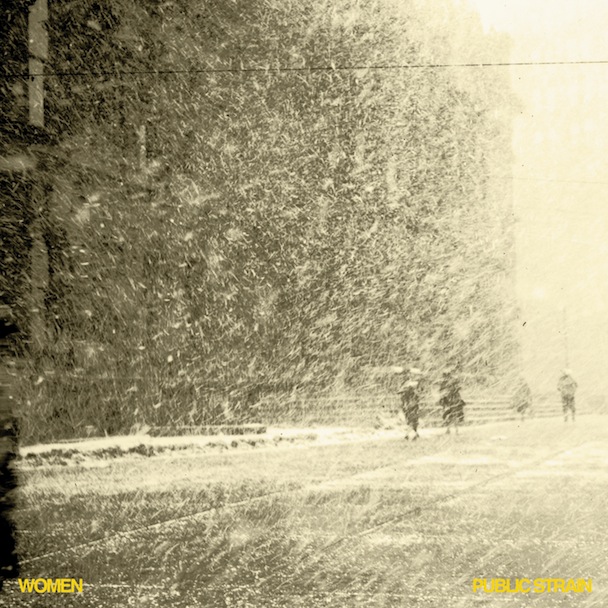 Being the subject of critical acclaim upon the release of a debut album can often make the task of producing a follow up daunting. Not so seemingly for impressive Calgary indie art rockers Women who released their much heralded debut album a couple of years back. Rather than being daunted by the task, its clear the band have relished the challenge and this is amply evident in the way they’ve approached the conception and execution of their new album Public Strain. It successfully builds on the quartet’s penchant for chaos and melody and while it may not exactly repeat the mixture of melodic abrasiveness at work on the debut, Public Strain is a logical progression for a band that has rounded out and expanded its sound and developed into a tighter cohesive unit with a more definitive focus. The mood that underlines the album is undoubtedly dark and unsettling but there are ample occasions where the light shines through. Indeed, each track displays that tendency.

The unsettling desolation that engulfs the album’s opener, ‘Can’t You See’ is almost total as the guitars mirror a rust bowl and the vocals are distant and detached, seemingly trapped down in a sinkhole of reverb. However, the constant almost unaffecting bass chords that sit underneath the apocalyptic sounds almost give a sense that hope can be drawn from the depths of despair. And that sums up Public Strain. There are a myriad of competing interests at work conjuring up almost at once the dark and the light, coldness and warmth not only in the songwriting but in the recording process as well. The trade-off between the often angst ridden and pensive post punk influences that cross four decades, Swell Maps, Sonic Youth, Pavement, Deerhunter et. al. and the sunnier surf rock of the era beforehand serves Women very well. Given the band’s geography, its almost as if they have dragged their collective sound kicking and screaming through the rugged, almost impassable iced capped Canadian Rockies hoping that one day they and it will reach the golden sands of Venice Beach. You know they’re never going to quite get there but that illusive sun drenched end point is an ever present factor along with the stark realisation that the journey, however difficult, will provide more thrills than the destination.

While Public Strain builds on the experimental recording techniques that encapsulated the debut and maintains the band’s attempts to scuff away incessantly at the polish that threatens to shine at times, Women are definitely not a lo-fi band. Lo-fi insinuates there is a deliberate attempt to do as little as possible to refine a song or idea, leaving it ‘as is’ come what may. Women’s work with Chad Van Gaalen is exactly the opposite of this approach, where a painstaking process is undertaken to get the songs to sound exactly as intended. This is even more relevant when talking about the process behind Public Strain, one that took some eight months to satisfy ambitions. You only need to experience the bone jarring energy that emanates from the brilliant ‘Heat Distraction’ while it serves its two masters, one intent on melodic destruction, the other resting on a neat, disciplined somewhat hypnotic rhythm. The barely noticeable recording technique that leaves a thin layer of noise underneath is clearly created and value adds, it’s certainly not accidental.

‘Narrow With The Halls’ is resplendent with its golden yet detached vocal harmonies. A Velvet Underground inspired guitar sound hammers away incessantly and is slowly surrounded by a blizzard of noise. The contemplative ‘Penal Colony’ ebbs nicely until it succumbs to a feedback dominated outro. ‘Bells’ serves the same purpose as ‘Woodbine’ did on the first album, trading as it does on the band’s prediliction for experimentation with recording techniques and their result. ‘China Steps’ uses subtle keys to build up a warmth around pulsing bass chords as the guitar rattles away on the outside trying unsuccessfully to ruin the mood. ‘Untogether’ marches inexorably to  a mesmerising conclusion while ‘Drag Open’ punches out a contemporary take on the no-wave era until turned upside down mid way through. ‘Locust Valley’ channels the metronomic best that Bradford Cox and co have to offer but adds to that with warm harmonies and emotive chord structures and the wistful and contemplative ‘Venice Lockjaw’ signals the calm before the storm.

And that metaphorical storm is the undoubted star of this show, and I don’t usually like to overtly single out one track over others in an album review for the fear it will overshadow the rest, is the majestic ‘Eyesore’. Placed as it is at album’s end is a masterstroke of tracklist planning allowing for the full gammit of Women’s brilliance to precede it. Combining elements of 60’s psychedelia with pure pop genius, its nigh on seven minutes of sonic heaven and a strong candidate for song of the year.

Lyrically Public Strain maintains the bands preference for the vague and obscure. The title of the album can be easily misinterpreted as having a political or social connotation. I initially thought it may have to do with the disconnection of community or the eternal difficulties western leaders seem to have getting their head around the fact that the planet’s heading for environmental annihilation. The album’s mood at times seems menacingly nihilistic. However, Women are having none of that. The term Public Strain simply has to do with an individual’s uneasy and paranoid relationship with others.

Having said that you can take one thing to the bank. There’s nothing tentative or inhibited about this album. Any concerns fans or critics may have had with Women following up their debut needn’t have worried, for Public Strain has built its base on the best that first album had to offer and constructed something that stands alone with strength. The only pressure this band feel is the pressure they put on themselves to improve. develop and evolve. It’s clear they dont care one iota for judgements from outside and it’s obvious that Public Strain is the result of an intensely inward and private process between four forward looking musicians who have confidently crafted a creation that should be shared with even more listeners than last time around. But you get the feeling that if that’s not the case, Women will continue on the pathway they have blazed for themselves and that’s as it should be.