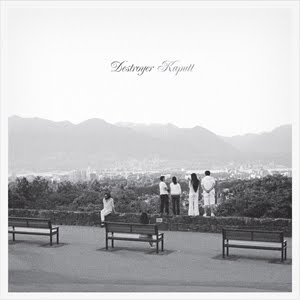 Few artists have the ability to create anything as original and substantial as the career that Dan Bejar has carved out for himself over the past fifteen years as Destroyer. Since his debut self produced LP We’ll Build Them A Golden Bridge, recorded in his home studio in Vancouver, Bejar has garnered a cult following that have relished his unique approach and masterful song-writing ability. Eight more  albums, three EP’s and a cassette have been released since the 1996 debut, all while also contributing to indie greats The New Pornographers and Bonaparte. Such prolific work is testament to the genius of his writing and orchestral arrangements.

Never the conformist, Destroyers’ sound embraces a multitude of styles, he has dubbed it himself as ‘European Blues’, taking in elements of folk, glam, free form jazz, indie rock and chamber pop. Importantly his musical style has evolved over the years, crystallising in this ninth offering, Kaputt, which has again seen Bejar taking things in another direction. Radically different from its predecessor, 2008’s Trouble In Dreams, (which he admitted turned out vastly different to how he intended) Kaputt features subtle electro influences, soft and silky horns and just the right amount of funk. The latter influence is seen most notably in ‘Savage Night At The Opera’ albeit in a stripped back form, evoking an 80s feeling in the same way Ariel Pink delivers on tracks like ‘Fright Night’. The album opener, ‘Chinatown’, saunters along blissfully with synths and airy brass reminiscent of Air’s classic Moon Safari or Groove Armada’s Vertigo.

An album highlight is ‘Suicide Demo For Kara Walker’, Bejar co-wrote this with visual artist, said Kara Walker, originally being part of label Merge’s ‘Score!’ twenty year anniversary festivities. The duo using Impressionist images to ‘complicate ideas of race rather than clarify them’, and working with lyrics such as “Fool child, you’re never gonna make it, New York city just wants to see you naked, and they will, though they’d never say so”, and then offering the advice, “Enter through the exit and exit through the entrance, when you can”. His vocals here are often half-spoken, half-sung, and as with all the tracks, pared down in subtler tones than previous work.

There is also a fair amount of Destroyers’ dry wit to be seen on Kaputt, in ‘Song For America’ for example he croons “I wrote a song for America, they told me it was clever”. Saxophone and an infectious drum beat dominate this track, having a relaxed feel that is present throughout this LP. The beauty of his work is in fact the amazing way the musical arrangements totally compliment the idiosyncratic wordplay and unique song structure he is known and loved for. At times seemingly off kilter, but not quite, it works in a controlled way on Kaputt that comes with Bejar’s confidence which shines through in spades across the journey of the album.

‘Bay Of Pigs’ is the closer, showcasing his lyrical abilities, and is a true ride of a listen, taking you unexpected places throughout. Building up and crashing down again when you least expect it, this is ambient disco at its best.

‘The Laziest River’, found on the vinyl version, takes up the entirety of side three, weighing in at twenty minutes, in five parts. Minimal vocals make way for sublime instrumentation, giving the piece room to explore while never becoming indulgent. The popularity and re-emergence of the vinyl format is a blessing indeed, allowing artists like Destroyer freedom to express their work in all its glory. The importance of the ideas behind the term ‘indie’ are more important now than ever in this media saturated and multinational world we live in. With major labels taking underhanded approaches to disguise themselves under the cover of off-shoots, trying to pilfer their share of ‘indie’ music, labels like Destroyers’ Merge Records are cornerstones to the scene.

You can catch live performances over March and April if you are in North America as he tours on the back of Kaputt. Tickets and dates can be found on his MySpace below. Seeing the magic live would be an experience to remember. If you can’t make it, a good pair of headphones/speakers and a couple of hours to indulge in this unique artist is an experience in itself.

From the album, ‘Kaputt’, Merge Records