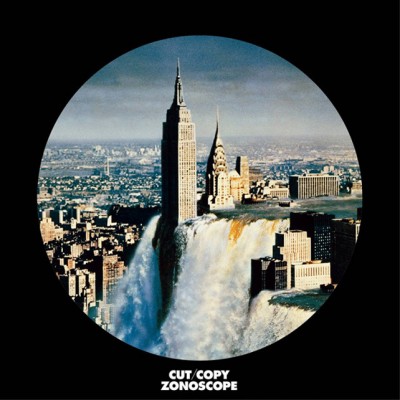 Cut Copy never cease to amaze with their uncanny ability to make simple grooves, beats and melodies that are deceptively familiar stand the test of time in a genre that seems limited. So it is with Zonoscope, the third release by the Australian new wave dance/pop outfit, an album that could of easily seen them rest on their laurels, trade on the success of In Ghost Colours and produce a telegraphed and pedestrian effort.  After all, it’s fair to ask, what else is to be done in the genres they trade in? If it’s nothing then, Zonoscope has to be an example of getting blood out of stone. And that is the thing with Cut Copy, an ability to mine for diamonds once thought exhausted, for slivers of gold in that elusive seam that has seen it’s best days, and find them consistently, again and again.

Zonoscope sees Dan Whitford, Tim Hoey and company at the top of their game. Yeah sure, on the surface, you’ve heard it all before, but you need not go far beneath the surface to find there is far more on offer than first sonic impressions. These offerings are the ingredients that make Cut Copy so vital and so good. Nuanced attention to every detail is omnipresent underneath, whether it be their trademark (and fucking catchy) backing vocals, the carefully constructed percussion that value adds at every turn, the fat, yet perfectly weighted bass or the synth effects that are applied at the most exacting moments.

The first track, ‘Need You Now’, the best song on the album, opens with an inexorable build up that, as per Cut Copy style, seems to forever teeter on a crescendo as Whitford’s tenored, yet vulnerable vocals create a tension that after four minutes is somewhat relieved. Their ability to write great dance pop is in most evidence on ‘Take Me Over’. While borrowing, almost verbatim it seems from a swathe of influences, most notably (or notoriously) the cringeworthy Men At Work’s ‘Down Under’ reference point, their ability to make what sounds on first listen a derivative swindle a lasting grower that keeps throwing up new elements every listen is simply unheard of. From being lampooned to being championed in real time is no mean feat.

Even the much less loved ‘Where I’m Going’, which either sent alarm bells ringing about where the band was going or excited others upon initial listens last year has now won a place at the table. More than that, a full six months after hearing the track for the first time, new things still emanate from it to lasting effect. The second half of ‘Pharoahs And Pyramids’ is a powerful affair while bass heavy funk is interspersed with vocal harmonies that channel pure bliss on ‘Blink And You’ll Miss A Revolution’.

Cut Copy could of used the success of In Ghost Colours to move toward a major and ‘tidy up’ the loose ends that characterise their sound and approach. But to their credit, they have stayed true to themselves. And this is the essence of Cut Copy and the reason while they will always be indie – they make music that they love and think others will love – and that’s all that matters. They are awkward, yet assured, derivative, yet original, familiar, yet unique. Their ability to make unabashed joyous pop and dance music shows now sign of waning. Indeed, with Zonoscope, they’ve once again hit new heights.

From the album, ‘Zonoscope’, Modular.