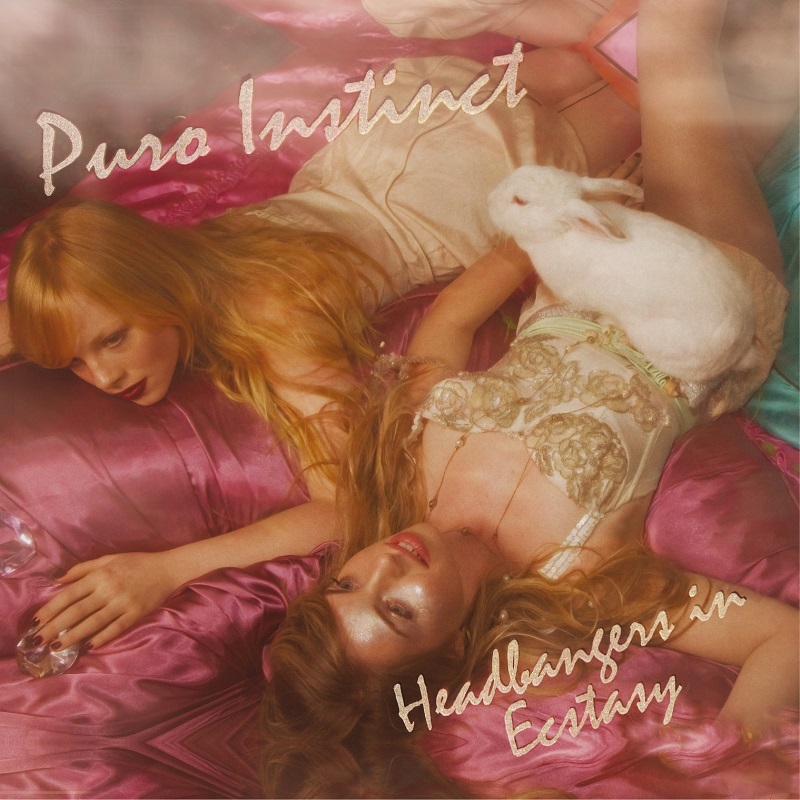 . Update. Wrong (ed.). Formerly Pearl Harbor, the band formed by Piper and Skylar Kaplan a couple of years back, the latter is just 16 and still at school, is now in more filled out form and does now have a set of accomplished musicians (said Cody Porter, Jessie Clavin, Mike Baum, Crazy Murray and SKYLAR KAPLAN – ed.) that do lend a sense of virtuosity. That said, missteps abound (no they don’t – ed.) but that is of no matter. delivery when paired with jangly, shimmering, summery melodies serve the record so well. Music is more than just skill and technical prowess. If it was limited to that, we’d all be listening exclusively to the work of session musos. Music is often more about the intangible. Quite simply, it isn’t science, it is art. And there’s enough of the intangible mixed with musical skill on the mis-named Headbangers In Ecstasy to deem it an impressive and promising first venture.

It’s clear where the sisters influences come from. 70s AM pop and rock and 80’s dream and jangle pop are alternatively ever present. Fleetwood Mac, Cocteau Twins, Mitch Easter’s criminally underrated Lets Active, R.E.M and the elusive psychedelic outsider Bobb Trimble among others. There’s even a nod to the girl groups of the mid 60’s at times on ‘Vapor Girls’. Their seemingly seamless ability to work over different styles and eras within songs is undoubtedly a strength. Another presence is the recently redoubtable Ariel Pink, currently basking in the glow of his brilliant album Before Today. It’s not so much his virtually insignificant vocal contribution to the album’s best track ‘Stilyagi’ as his contribution to the album’s whole approach. The lo-fi echoed sound and washed out textures that characterise the album’s production are classic Pink. There’s quite a similarity here with both Pink and the Kaplan Sisters in terms of trajectory. Both have surrounded themselves with musicians that have helped flesh out their music and brought it out of the private domain and both subscribe to the ‘skillful, non skill… ‘whatever it is that you’re doing, don’t figure it out’ line of thinking when it comes to creating their sound.**

The lo-fi production values also suit the album’s certain je ne sais quoi. There’s an underlying fragility that’s ever present on Headbangers In Ecstasy that almost seems to come out as unconcious self-conciousness. That doesn’t mean that they’ve gone into their shell and withheld anything. The often detached disposition of the Kaplan Sisters is more about them actually knowing their limitations and celebrating them in organic fashion rather than trying to over-compensate, oversell themselves or cynically portray themselves as cool. There are plenty of that type kicking about. Structurally, the album is a triumph. Each track is cleverly written with each verse and chorus of equal attraction and each are peppered with easily accessible hooks and melodies and intelligent and appropriate guitar licks and solos. Ear candy really.

‘Lost At Sea’ is a standout, with its killer melody, cleverly contructed duelling guitar work, kick-ass chorus and effective backing vocals. ‘Silky Eyes’ begins with a circus like theme before breaking into a drama filled chorus and contains has a killer bass fill and a memorable fret tapping filled guitar solo. ‘Slivers Of You’ is an upbeat Lets Active inspired piece of jangly pop goodness. ‘Stilyagi’ is a chilled out ode to courageous Russian youth that dared to subvert the drab Soviet machine with fashion and attitude during the 40s, 50s and 60s. And yes it does have relevance to the Kaplan’s who, rather than just stumbling across the Russian word and thinking it would be cool to use, are actually influenced by the fashion sense and outsider culture of 1980s Russian ‘Red’ wave acts. ‘California Shakedown’ deals with the darker undertones of said state and is a treatment of their take on how a hypocritical United States continues to hide its corrupt, seedy underside, a contradiction that preoccupies Piper Kaplan in particular.

While everyone is entitled to their own opinion and the reviews for Headbangers In Ecstasy have been mixed, it’s unfortunate that some haven’t spent more time with the record or bothered to mine below its surface. Because descriptions like ‘shallow’ and ‘wafer thin’, ‘wispy’, ‘fluffy’ and ‘drippy’ are clearly out of context and therefore grossly unwarranted. They actually ignore it’s organic nature – nothing plastic here. A real examination of this album will shoot holes in such assessments. There is great depth of songwriting – a great awareness of history, hook and melody and how they can be constructed into great songs, even if delivered with fragility in a box labelled ‘handle with care’. The trimmings (i.e. the guitar solos) embellish those constructions no end. No-one should confuse production values with the quality of the music on offer. Like it’s airbrushed cover, if you don’t like it’s washed out sound that’s fine but if it’s not understood that the lo-fi production and the album’s fragile disposition go together then the penny hasn’t dropped. Clearly, if you like pop music you should love Puro Instinct and you should love Headbangers In Ecstasy. A self-examination of why you like pop in the first place is in order if you don’t.