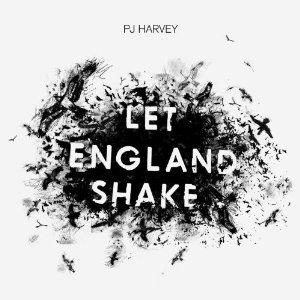 Since beginning her musical career around twenty years ago, PJ Harvey has been at the top of her game producing powerful albums that cross genres including rock, electronica, folk, punk blues and pop. Her work has been highly regarded over this time as she has reinvented herself time and time again, culminating with her eighth LP released in February, Let England Shake. This album has been a long time in the making, work began back in 2007 during the release of her introspective piano heavy White Chalk, and was recorded over five weeks in a Dorset church early last year. The high regard Harvey is held in by people in the industry is evident by the list of producers who contributed to Let England Shake, namely long time collaborator John Parish, Mick Harvey (The Birthday Party, The Bad Seeds), and Flood (Nine Inch Nails, Smashing Pumpkins, Depache Mode, The Jesus And Mary Chain to name a few). Harvey herself also served as producer. What they have come up with is another incarnation of the artist who is always striving to deliver a fresh new take on her work. She has said of Let England Shake; “All I can say is that I am pleased with it, because I feel it’s a grand departure from anything [I’ve done] before. If I’ve done that, then for me, it’s worked. I’m already feeling like I did, and I’m happy. I’m very pleased because I’m not repeating myself.”  With so many indie artists hitting the airwaves and then disappearing into obscurity, it’s mighty rare to find someone of Harvey’s calibre. She has proven that through making intelligent choices, it is possible to remain poignant and relevant after two decades in the game. The fact that Let England Shake debuted at number eight on the UK Albums Chart, eighteen years after Rid Of Me peaked at number three is testament to this.

Harvey drew upon many influences for the album, musically, visually and lyrically. She has cited the surrealist works of Salvador Dali and the macabre hellish paintings of Francisco Goya, as well as the poetry of TS Eliot and Harold Pinter. Musically, The Pogues, The Velvet Underground and The Doors. Conflict is a current running through Let England Shake, with the title possibly referring to public opinion across her country in relation to its involvement in the ‘war on terror’. She read testimonies of soldiers serving in Afghanistan and Iraq, and more than one song references the battle of Gallipoli and World War One in general.

‘Let England Shake’ the title track is first up on the LP, she played it live earlier this year on the Andrew Marr show with a sample of ‘Istanbul (Not Constantinople) part of the track, this has since been scrapped after she decided it held the song back. A hint of the tune is still present sounding as if it’s emerging from an ancient music box, with her new instrument of choice, the autoharp droning throughout. ‘The Last Living Rose’ has sparing and effective use of brass and tambourine with somewhat politicised lyrics, “Past the Thames River glistening, like gold, hastily sold, for nothing”. ‘The Glorious Land’ is again harking back to the theme of war and battles, an oddly placed bugle calling ‘reveille’ plays three times during the minute long introduction, so oddly placed it may have some people looking around the room for a misplaced mobile phone receiving a text message. However it sets the military tone, in this track full of call and response, “Oh America, Oh England”, before moving into possibly the most evocative track on the album, ‘The Words That Maketh Murder’. The picture painted in this song is a grisly one, recalling the images of the aformentioned Goya. “I’ve seen and done things I want to forget, I’ve seen soldiers fall like lumps of meat, blown and shot out beyond belief, arms and legs were in the trees”, the track picks up tempo becoming more urgent as it progresses. A male backing vocal track sounding Oompah-Loompah like comes in and repeats the vocal hook, before the outro asks the question, “What if I take my problem to the United Nations?”.

‘All And Everyone’ is the longest track at just over five and a half minutes, and begins with a lighter touch but soon descends into another portrayal of the senselessness of war. We are on the beach again here, the horn section adding a layer of atmosphere, but it’s her upfront vocals which provide the strength to this track. ‘England’ has her vocal gymnastics on full show, at times sounding almost like a middle-eastern call to prayer. ‘Bitter Branches’ is a snappy tune just over two minutes in length, the fastest track on the album. ‘Written On The Forehead’ builds up nicely with a synth layer giving way to a sample by Niney The Observer, ‘Blood And Fire’, an old reggae track which sits perfectly alongside Harvey’s urgent vocals.

Let England Shake is rounded off with John Parish on vocals with Harvey on the last track, ‘The Colour Of The Earth’. Guitar driven, with flashes of tambourine and little else, Parish sings “Louis was my dearest friend, fighting in the ANZAC trench”, musically it’s stripped back with lots of reverb on the autoharp, having the sound right there on the recording of the church space used for this album. The videos have been shot by veteran war photographer Seamas Murphy, after Harvey contacted him to get an idea of what it was like in wars that he covered as part of the research for this album. All twelve tracks have videos, and will be released over the year.

This is a very different direction for PJ Harvey indeed, which is exactly as intended, and a reason she has sustained her reputation over many years as a vitally important part of the indie music world. Her intelligence and massive talent combine to deliver a punch with every album, here she has managed to make a statement about the current situation in Iraq and Afghanistan, war in general, by recalling the horrors of the Great War. Through her songs the dusty memories of that time have served to educate the folly of war in all cases, everywhere. She is at the top of her game and we can only look forward to what she has in store for us with album number nine.

The Words That Maketh Murder