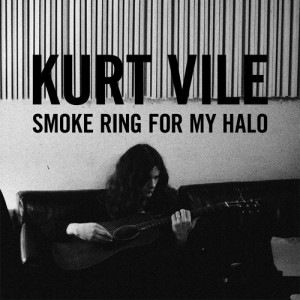 Kurt Vile has been kicking around his unique brand of guitar based song writing for a decade or so now but it’s only over the last four years that his solo work has come to the fore through the release of three albums in addition to a mini album and a spate of EPs. First coming to notice outside his home city of Philadelphia through his involvement in the band The War On Drugs, 2008 saw him venture out on his own with the release of his debut album Constant Hitmakeron Gulcher Records, a selection of DIY recordings which over time put Vile squarely in the indie spotlight once released a year later on Woodsist. In addition to the re-release, that same year, 2009, saw Vile drop no less than four new releases on four separate labels, the mini-album, God Is Saying This To You on Mexican Summer, the Fall Demons 7″ EP on Skulltones, The Hunchback EP on Richie Records and finally the full length, Childish Prodigy in 2009 on Matador.

While this work landed him critical acclaim and lavish praise from fellow artists, the growth evident in his latest release, Smoke Ring For My Halo is undoubtedly Vile’s high point, which promises to elevate him above the millieu of the very good. It’s an album that celebrates all that is unique about an artist that is the very opposite of the usual rock guitarist virtuoso. For all the assuredness present, there is a vulnerability that underlies and underpins Vile’s musical and lyrical constructions; an ever-present honesty and a truck load of integrity if at times there may be a misunderstood disingeniuity. The other thing that is impressive about Vile’s approach is that while guitar is front and centre and forms the basis of each track, it never dominates, never overwhelms the essential, loosely written narrative, letting the songwriting breathe and as a result, flourish. Combinations of keyboard, harp, mellotron and slide add perfect accompaniments to that centre. Vile’s dishevilled yet at times shining vocals round the package off nicely.

But just try to pin a style on Vile and you will falter. Smoke Ring For My Halo defies genre not only between tracks but within them. Being one dimensional is certainly something Vile could never be accused of. While rock is mostly the mainstay, elements of a variety of pop and folk stylings abound and the ease with which he switches between them is an example of a masterful songwriter at work. Equally, the timing signatures reek on the surface of ambivalence, speeding up and slowing down at will while the vocal structures are loose and tend to focus in or trail off with Vile’s state of mind as if stream of conciousness is always at work. But careful listens and attention to detail will explode the certainty of that theory, indeed certainty is not something you can associate with any of Vile’s songwriting. But he knows exactly what he’s doing even if its not always entirely clear to the receipient. This is certainly the case lyrically with an abundance of the obtuse and confounding.

The aforementioned fragility is at once present on the album’s opener, the wistful, ‘Baby’s Arms’. Vile sings ”I get sick of just about everyone, so I hide in my baby’s arms’. It’s a gorgeous piece of starry eyed folk achieved with a cosmic combination of acoustic guitar and carefully constructed electronic elements. ‘Jesus Fever’ is a joyous dose of spritely pop while ‘Puppet To The Man’ is a paean to the laid back rock of the past with its cascading hooks and melodies. As its title suggests, ‘On Tour’ is an introspective journey that matches the highs and lows of touring or just life in general. Vile sings, ‘I wanna write my whole life down, Burn it there to the ground’ before launching into a line about escapism. ‘Society Is My Friend’ contains an unsettling urgency with it’s big drum sound, the constant tension of its guitars and accompanying embellishments and the reverb on Vile’s vocals. You get the feeling that society as the metaphorical friend is a little two faced sometimes. Vile sings (society), ‘it makes me laugh down in a cold blood bath’. The track also contains the classic line, although it’s hard to connect it to anything, ‘Kiss me with your mouth without closing it all that much’.

‘Runner Up’s sees Vile skirt up and down the guitar neck to enticing effect constructing a series of understated hooks that grab you instantly. ‘In My Time’ contains pure unadulterated lashings of rock and roll goodness between the exquisite jangly pop of verse and chorus. Vile’s ability to change in and out of genre effortlessly is what sets him apart from many. The three guitar melodies in the lyrically cagey ‘Peeping Tomboy’, with its strange delayed timing signature and retarded, bedraggled vocals. The way Vile stretches and compresses the former while doing similar with his voice makes it a very special piece of music. The title track has a country rock swagger while the closing number, ‘Ghost Town’ is at first a little underwhelming but closer examinations prove it to be a hypnotic, somewhat cathartic ride. The album’s final line sums the album and artist up perfectly, ‘Raindrops might fall on my head sometimes, I don’t pay ’em any mind’.

The undoubted strength of Smoke Ring For My Halo is Kurt Vile’s ability to make disinterestedly intense music. A hook laden, yet tonally condensed album that is dirty yet clean, meandering, yet taut, careless, yet careful and cryptic, yet obvious. Loose ends are seemingly left untied but if that’s the case why the fulfillment once the last track ends? Indeed, it is easy to become obsessed as the album is such an effortless, enticing experience. The sheer density, yet spaciousness of his songwriting means Vile has now entered the pantheon of great artists whose music will more than stand the test of time. Smoke Ring For My Halo will prove to be an album that will always be easy to get out of the collection, dust off and give a spin. Indeed, repeat listens will prove to be involuntarily mandatory and that dust, for the most part, may not even have time to settle.

From the album, ‘Smoke Ring For My Halo’, Matador