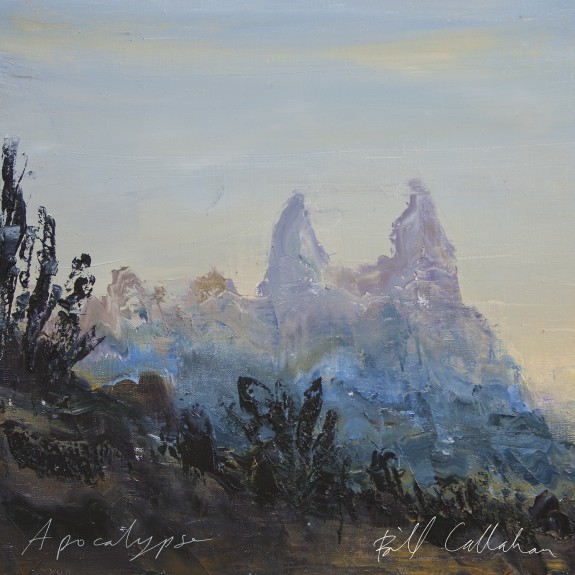 I continue to wonder if there’s a bad record lurking somewhere in Bill Callahan’s music future and after surveying the organic, earthy fruits on his fourteenth studio album, Apocalypse, I’m coming to the conclusion that the answer is probably no. Since leaving behind his partly necessary lo-fi beginnings in the mid 1990s and trading them for greener musical pastures, Callahan has not taken a misstep. Producing consistently good records is a difficult task, but Callahan seems to do it with ease. To the unfamiliar, Apocalypse will probably sound a lot like its predecessor, Sometimes I Wish We Were An Eagle and this is often the barb thrown at Callahan, that he’s a one trick pony. It’s a ridiculous notion to those of us enamoured with his work, but its a recognition that subtlety and intelligence in music and in life sadly goes almost unnoticed and therefore is largely unrewarded and unloved by the flickering subliminality that dominates mass culture today. It’s a culture that seems to have little time for Callahan’s penchant for time and space, his determination to spend time with his characters, develop his narrative and search for that metaphor that hits one between the eyes every time.

So it is with Apocalypse, a seven song story that traverses themes of individualism and nationalism and sees Callahan venture outside of himself more than he ever has on past outings. Apocalypse can almost be termed an album of social criticism, all the while maintaining Callahan’s tendency for introspection, However, if your not tuned in, Callahan’s seemingly deadpan vocals and familiar acoustic guitar dominated music will be your only markers and you will miss some brilliantly honest social commentary. That’s not to say that Callahan sees himself as having all the answers. In fact, Apocalypse, as with all of his work will probably provoke more questions than it answers.

What also sets this album apart from its immediate predecessors is its live formula. Callahan stated that he was searching for a more organic, instant feel with this album so employed a largely one take policy that sees the slight faux pas and aberrations left in the final mix, witness the drum fill in ‘America’. It reminds in no other way but memory of his first few eccentrically experimental outings where one takes were mandatory for other and more pressing reasons. Musically, Callahan displays his usual folk and rock leanings but with nods slightly more to the latter, especially with the use of electric guitar licks that litter certain tracks. He also employs some 70s funk on the third track, the acerbically witty ‘America’ which changes up the album’s trajectory perfectly. That change up sits well against the rustic old style feel in the instrumentation as the song structures transports you to a simpler, yet more foreboding time typifiying Callahan’s ability to ably represent time and place.

The pensiveness of youth on opener ‘The Drover’ is immediate as guitar strums clang and drums patter and crack like a horseman’s whip. It’s an instant reminder of Callahan’s ultimate respect for the might of the environment and its actors and the ultimate moral and physical difficulties present  when the individual human being tries to use or tame it or them. He ruses; “Yeah one thing about this wild, wild country, It takes a strong, strong, It breaks a strong, strong mind, And anything less, anything less, Makes me feel like I’m wasting my time, But the pain and frustration, is not mine, It belongs to the cattle, through the valley”. This is more than illustrated when the cattle turn on him, the music changes starkly as Callahan sings; “And when my cattle turns on me, I was knocked back flat, I was knocked out cold for one clack of the train track”. But then that human defiance; “Then I rose a colossal hand buried, buried in sand, I rose like a drover, For I am in the end a drover, A drover by trade, When my cattle turns on me, I am a drover, double fold”. The sense of distance and apartness from everyday life is imaged when speaking of the lonely occupation of driving cattle; “I consoled myself with rudimentary thoughts, And I set my watch against the city clock, It was way off”. Its an ode to the restlessness of youth, as the young drover struggles to forge a clear direction in his life in the same way he struggles with his cattle.

‘Baby’s Breath’, sees a young man stumble upon uncomfortable domesticity, the delicate guitars and the loose timing acting as musical metaphors for the trials and tribulations associated with social and cultural institutions (marriage) and norms (fatherhood), personal expectations that surround them and the tenuous relationship that many men have always instinctively had with such restriction and conformity and being forced to ‘grow up’. “My girl and I rushed atop the altar, The sacrifice was made, It was not easy undertaking, The roots gripped soft like a living grave”. Like many, our father puts his head down and builds physical structures to make up for his emotional shortcomings; “Good plans are made by hand, I’d cut a clearing in the land, And for a little bed, For her to cry comfortable in”.

That loss of innocence takes on a wider perspective and a dramatic turn with ‘America’, Callahan’s most politically charged track he’s ever penned.  Amidst funked up guitars and beats, he acerbically and wryly describes his country’s past and present and almost laments how much control in cultural terms this hypocritical nation has and has had on the world; “America! America!, I watch David Letterman in Australia, Oh America!, You are so grand and gold, golden, I wish I was on the next flight to America”. He reminds us of and berates America’s hypocritical diplomatic and war record at home and abroad, “Afghanistan, Vietnam, Iran, Native American” and after dressing his music heroes Kristofferson, Newbury, Leatherneck Jones and Cash in metaphorical battles fatigues subtlely boasts “I never served my country”. There’s also a dig at the construction of collective and selective memories that are at the core of myth-making that underpins nation building; “Well everyone’s allowed a past they don’t care to mention”. There’s a nod to the sad state of affairs in today’s domestic American politics with the media dominance by the conservative hard Right, the tin pot, half-arsed ideas of the nutty Tea Party and the ever-growing political influence of the country’s vocal religious extremists. And if there was any doubt that Callahan is far from happy at the growing divide between rich and poor, we’re left in no doubt by the final lyrical offering that comes on the back of some rollicking lead guitar; “All the lucky suckle teat, Others chaw pig knuckle meat, Ain’t enough teat, ain’t enough teat, ain’t enough teat, Ain’t enough teat, ain’t enough teat, ain’t enough to eat, In America, America! America!, In America”.

The album’s centrepiece, ‘Universal Applicant’ takes things down a notch musically with its rootsy rhythm and sparse wooded instrumentation. But lyrically, things have taken a turn for the worst for our protagonist. Out alone and adrift and in trouble in a boat having freed himself from those aforementioned social straight jackets, he shoots himself in the foot literally when the flare he fires to draw attention to his plight falls squarely back on him and destroys his craft. As he slowly sinks, wittily Callahan rhymes the myriad of contradictory things his character has been; a punk, lunk, drunk, skunk, hunk and a monk who is now literally, sunk.

The exquisite ‘Riding For The Feeling’ has Callahan ruminating on an appropriate way of saying goodbye for his now touring entertainer. Laden with beautifully constructed slide guitar that sits atop a familiar strumming waltz like rhythm, the never-ending search for the right explanations for the past actions of a life is a process that’s worth is questioned; “With the TV on mute, I’m listening back to the tapes, On the hotel bed, My my my apocalypse, I realized I had said very little about ways or wheels”…(but) “What if I had stood there at the end, And said again and again and again and again and again, An answer to every question, Riding For The Feeling, would that have been a suitable goodbye”. Our protagonist has clearly been trading on instinct. ‘Free’s’ an oddly named but discernible title is matched appropriately with spritely pastoral sounds but lyrically Callahan is again questioning the meaning of freedom; is it just a path to endless questions? “I’m standing in a field, A field of questions, As far as the eye can see, Is this what it means to be free?”. Is there such a thing of true freedom; “Or is this what it means to belong to the free?”

The album’s lengthy closer rings like an slow burning epic and has Callahan bringing together all his protagonists; drover, father, social critic, castaway, entertainer, philosopher for a final farewell. A carefully constructed catharsisis, ‘One Fine Morning’, starts off in spartan shape musically with guitar for rhythm and piano for embellishment which fits perfectly with the opening lines; “Just me and the skeleton crew, We’re gonna ride out in a country kind of silence, We’re gonna ride out in a country silence, Yeah one fine morning”. Utilising a horse and a road as metaphors for crossing over into another dimension after death, questions are still unanswered but he realises that’s what he is and what he’s done will affect future generations, however insignificantly, he will be that horse, he will be that road. Spot the quoting to the album’s catalogue number ascribed to a metaphorical plane model “DC 4 5 0”, the last words on the album, which could almost be a reference that ‘Apocalypse’ has been gifted by Callahan, giving a piece of himself.

Bill Callahan’s ability to intelligently articulate and narrate his way through complex themes utilising everything from metaphors that illustrate stark reality to punchlines that smack of wryness and black humour firmly entrenches and ensconces Callahan in the pantheon of best songwriters of the modern era. That the music he employs alongside his lyrical work can be labelled poetry in and of itself is further evidence of just how good an artist he is. Callahan is just as important as the legends he namechecks on this album. He’s just as good as Dylan, if not better, but lives in an era where intelligence goes under the radar, is undervalued, even distrusted and an artist of his ilk will never be heard by the masses that have heard Dylan down the years. But that is of no matter here. ‘Apocalypse’ may just be Callahan’s best album, quite a statement given the quality of his discography over the last two decades and some. It’s further illustration and a satisfying reminder of how important this modest 44 year old artist is, a testament to his stunning consistency and longevity.

From the album, ‘Apocalypse’, Drag City.