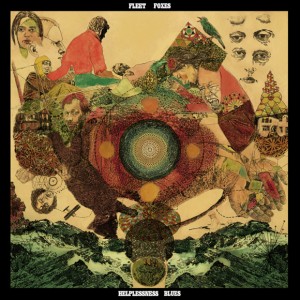 When Seattle’s indie folk outfit Fleet Foxes released their second EP Sun Giants, followed by their debut self titled LP, they must have realised what a great year 2008 would turn out to be for them. A mammoth tour schedule to support these releases ensued with critics lavishing praise upon them. Building an original fan base mainly by that time honoured method, word-of-mouth, Fleet Foxes proved their worth while supporting Blitzen Trapper, with many punters saying they blew the main act out of the water. The full length debut received 9.0 from Pitchfork, five stars from The Guardian calling it “A landmark in American music, an instant classic” and it made 17 best album of the year lists topping six of them.

Now, the dreaded second LP, the all important follow up weighted with expectation and often impossible stripes to live up to. Helplessness Blues was borne out of much struggle, soul searching, and at times personal and financial heartache (scrapped recording sessions cost the band sixty grand of their own money). While retaining the baroque harmonic beauty that was so pivotal to their success, frontman Robin Pecknold has said of the new LP, they wanted it to sound “Less poppy, less upbeat and more groove based”. They wanted the album to be recorded quickly, capture a pure sound with vocals “being recorded in one go, so even if there are fuck-ups, I want them to be on there. I want there to be guitar mistakes. I want there to be not totally flawless vocals. I want to record it and have that kind of cohesive sound. Van Morrison’s Atral Works, to me, is the best sounding album because it sounds like there were only six hours in the universe for that album to be recorded in. So I want it to have that feeling.”

The album opener, ‘Montezuma’ begins the introspective atmosphere prevalent throughout the twelve tracks. “So now I am older, Than my mother and father, When they had their daughter, Now what does that say about me”, Pecknold sings with a worldly authority far beyond his 25 years. The lush guitars and harmonies continue into ‘Bedouin Dress’, featuring mandolin and a Middle Eastern flavour with violin adding to the many layers found on all the tracks here. There is also a theme of nostalgia present on Helplessness Blues, found in the subject matter and intrumentation. Twelve string guitar is used, as well as the Marxophone, a fretless zither (patented in 1912), flute and mandolin leaving percussion very much in the background. ‘Sim Sala Bim’ explores the 1940s world of ‘Dante the Magician’ who coined the nonsense phrase of the title in his travelling show. ‘Battery Kinzie’ is one of the most accessible tracks, a pop-friendly tune coming in at under three minutes, one of three tracks to do so. This format is disrupted with some tracks on the more experimental side, ‘The Shrine / An Argument’ is a standout of the album. Clocking in at eight minutes it drifts in focusing on the strings and vocals, stronger than ever on this track. Four distinct parts, divided equally, shift time signature, mood and lyrical content. The track descends into an unexpected free style jazz outro for the final two minutes, a brave move and one that pays off.

‘Lorelai’ has more emphasis on percussion than the other songs, and again we hear Pecknold lamenting youthful times. “So I guess I got Old, I was like trash on the sidewalk, I guess I knew why, often it’s hard to just sweet talk”. The waltz like structure makes it a delight to listen to and the arpeggiated chords highlight the skill that sets this band apart from the others.

Listening to the album conjures images of the red velvet, stained glass and dark textured wooden frame of the Spiegeltent. The ideal venue for a band of this calibre and grace. Fleet Foxes’ follow up has proven to stand up, graceful indeed and testament to the hard work and faith imbued within it.