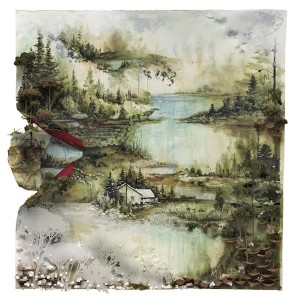 The story of Justin Vernon’s life over the last few years makes for interesting reading, and there are pages of it out there on copious blog sites. For Emma, Forever Ago was one of the most impressive indie debuts of the 2000s, and one of the all time best albums to ever come out of a wood cabin in the wilderness, maybe looking somewhere like the cover art above. That brooding and heart wrenching collection of nine tracks struck a collective chord. Followed with the EP Bloodbank and various collaborations you have probably read about before, Bon Iver’s, Bon Iver is a departure and exploration of different themes. More an impressionistic look than an introspective one, this is definetely more of a full band experience while retaining Vernon’s amazing vocals front and centre.

The initial first thoughts for the LP came while he was on tour in Australia, the idea of Perth (Capital of Western Australia) being the most isolated city in the world struck him, while experiencing a sense of freedom and then sharing a friend’s loss of a close mate. All this culminated in the opening track and the tone of the album. The essence of For Emma is here, fans of that record will not be disappointed, but here the colour palette is wider and tracks even more vivid.

Recorded in a renovated veterinarian clinic that Vernon bought with the intention of tailoring his own unique space, he certainly achieved his goal. The studio was built over an empty swimming pool attached to the clinic, and he has said of the space he has called April Base Studios in Fall Creek, Wisconsin, “It’s been a wonderful freedom, working in a place we built. It’s also only three miles from the house I grew up in, and just ten minutes from the bar where my parents met.” The new album and the creation of the studio was an experience that happened side by side and was a vastly different experience from the sparse cabin-in-the-sticks set up that his debut was borne from.

The aforementioned ‘Perth’ is where the album begins literally and figuratively. Gorgeous electric guitar strums, as Vernon’s ethereal vocals drift in, a military snare and clarion horn underpinning the track. It immediately speaks volumes in that we are in for something new, different and exciting with this. In keeping with the place names, real or imagined found throughout Bon Iver, ‘Minnesota, WI’ begins with a deep vocal intro before the falsetto kicks in, layers of synths, more horns, and acoustic guitar as he sings the lyrical hook “Never gonna break, never gonna break”. ‘Holcene’ comes over like a modern ballad and is one of the highlights here. Lyrics are hard to distinguish, and when you can make them out at times hard to decipher “…and at once I knew I was not magnificent, hulled far from the highway aisle, (jagged, vacance, thick with ice), I could see for miles, miles, miles” It’s the last phrase that resonates with this song though, it sticks with you all day, in a good way. The made-up words and mumbling that occurs occasionally may have been a reason he has uploaded the lyrics for every track through Jagjaguwar here.

‘Towers’ has multiple layers of vocals, in what is a simply structured track, percussion coming in around the halfway mark getting busier as it progresses. ‘Michicant’ is a bit easier to work out, a fictional location this time, focussing on memories of youth. The lyrics are still abstract however, “I was unafraid, I was a boy, I was a tender age, melic in the naked, knew a lake and drew the lofts for page, hurdle all the waitings up, know it wasn’t wedded love, 4 long minutes end and it was over it’d all be back, and the frost took up the eyes”. The focus for many tracks lay on rhythm and melody instrumentally and vocally. It can difficult to purchase a hold on anything concrete, which is the beauty of Bon Iver. The addition of a bicycle bell on this track is gold.

‘Wash.’ with its haunting single piano line is a thing of pure emotion, sparse as anything on the LP, so much can be conveyed through such simplicity. The skill of the composing is clear, and the tension evoked through it something to behold, very cinematic. ‘Calgary’, another city in the middle of nowhere, is one of the great songs on this album. That voice, like none other, is what made the debut album stand out. Here on Bon Iver, and captured most of all in this track, the magic of his voice and the tightly produced skill of the new people involved musically, comes to a perfect culmination. Rob Moose served as string arranger after working with Antony and the Johnsons, Arcade Fire and the National.

Vernon’s voice-as-instrument is as compelling as ever, and just seems to be getting better. The structure of the album, with each track seguewaying into the next make it one to listen to in its entirety. Raw, earnest and timeless, the placement of tracks have them flow like a river found the cover to the album. From the west of Australia to Canada’s remote wilderness, Bon Iver is one trek around this lonely planet as a cohesive whole.

From the album, ‘Bon Iver’ Jagjaguwar.

From the album, ‘Bon Iver’, Jagjaguwar.