RECORD REVIEW: WASHED OUT – WITHIN AND WITHOUT

RECORD REVIEW: WASHED OUT – WITHIN AND WITHOUT 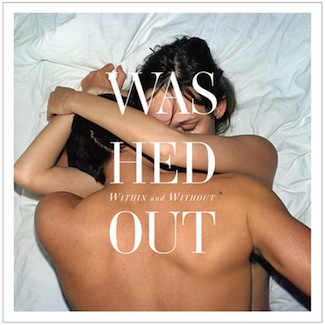 Having evolved over the last few years from a bedroom producing lo-fi solo outfit, Ernest Greene of Washed Out has just dropped an album that proves that this approach to making music is as worthy and proven as any other. This democracy of expression is obviously more suited to the indie scene; it’s where the word “indie” actually comes into it. And it is a polar opposite to the formulaic and robotic, production-line that has emerged over the last ten years via such crowd pleasing shows as “(insert country here) Idol”, and the dozens of money grabbing spin-offs it has spawned. Not that this is a new thing, commercial vampire-like producers have been around since the birth of vinyl, (remember Stock Aitken Waterman from the heady 80s?), it’s just that the exploitation and cattle calls looking for the ‘right package’ weren’t broadcast live to millions of people in the car crash of reality TV we see today.

Artists like Ariel Pink, Noah Lennox and Washed Out’s Ernest Greene have the ear and talent to deliver music that moves us in ways Kelly Clarkson couldn’t dream of. No need for a massive TV studio orchestra to back you up when you now have all the technology needed from the local electronics store to get a good talent started from your own bedroom, basement, or kitchen studio. Greene produced three EPs over two years (High Times, Life Of Leisure and Untitled) plus a stand alone single (Feel it All Around) in his home town of Perry, Georgia. From these releases people took notice and Washed Out made an impact in the already crowded genre of “chillwave”. In two short years Greene has found one of his tracks used as the theme song for the Independent Film Channel’s TV series Portlandia, he has performed at the Pitchfork music festival, been chosen by Battles to play at their incarnation of the All Tomorrow’s Parties festival (Nightmare Before Christmas) taking place in Minehead, England, and he has been signed up by legendary label Sub Pop Records. Here he joins their stable of acts such as Nirvana, Mudhoney, Soundgarden, Wolf Parade, Foals, Fleet Foxes and No Age.

Within And Without is an album built off the back of the home-produced EPs. Moving on from the lo-fi solo persona, Greene has enlisted the help of Ben Allen from Animal Collective / Deerhunter for bass, percussion, producing and mixing and Caroline Polachek of Chairlift to add vocals in this tightly packaged LP of nine tracks. The album sounds and feels vast and expansive, like a ten mile beach with soft focus and warm sunshine. It’s a surround sound embrace.

‘Eyes Be Closed’ begins things on the LP, its jilted synths gliding along with more layers being added as the track progresses. The vocals of Greene are hazy and soulful, and the song has an air of familiarity about it. Not in a ‘ripped off, I’ve heard it all before’ kind of way either. ‘Echoes’ comes next, 80s inspired and a good example of the meld of the hip-hop/electro structure used throughout this album, with a measure of early house thrown in. ‘Amor Fati’ has a cosy romantic atmosphere about it, stripped back percussion and synths up front. This track showcases Greene’s vocal abilities, suited perfectly to this track.

On ‘Far Away’ we hear a beautiful frail violin exuding sadness with the gauzy vocals extenuating the track and xylophhone offering a sparkling glimmer of positivity. ‘You And I’ is one of the highlights, a song to curl up with as it swirls cosily around you. Within And Without the title track is the sound of Washed Out at its most pure. These tracks don’t seem to flow into each other in any deliberate way, but still sit side by side in a way that if left on repeat, will have you on the third lap without you realising at all.

Washed Out has captured the digital rays of Summer and captured something that many people, even those who don’t usually partake in “chillwave”, can enjoy. Within And Without is fresh, nuanced and a joy to listen to. Greene has inspired many since his early EP offerings only a couple of years back. This solid debut shows a great leap forward from those bedroom productions and can only leave you hanging out for more.

From the album, ‘Within You, Without You’, Sub Pop

From the album, ‘Within You, Without You’, Sub Pop