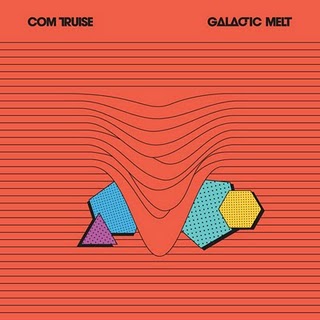 For those of us who fall into the generation marked ‘X’, the recent proliferation of 80s inspired and influenced electronica has been somewhat bemusing. Saturday morning cartoons, cheesy TV graphics, Atari game consoles, happy pants, stone-wash double-denim, and Knight Rider mark the time. Drum machines and synths entered the mainstream via beginnings in Kraut rock, and with bands like Ultrovox, Roxy Music and New Order amongst many others. To find yourself at a festival in 2011, dancing your arse off to artists like Ariel Pink in his full 80s glory is a wonderful thing. This musical trip back in time is not a carbon copy however, it shouldn’t be that acts of today sound exactly like Duran Duran did thirty years ago. With Com Truise we are certainly in the ‘greed is good’ decade, but not without the luxuries of the 21st century.

Seth Harley, is the man behind Com Truise, and is based in Princeton, New Jersey. Last year he dropped his debut under this moniker, the EP Cyanide Sisters, which was initially released as a free download via the AM Discs label. Just making music as a hobby, he has said he had no intention of the EP going any further than a give-away track through a blog he liked. Things soon changed, and upon signing with Ghostly International it was re-released digitally to critical acclaim. Galactic Melt is his first LP and first physical release. Drawing from Italia House, Hip Hop and funk, Harley has described the album as a sound-track to an un-filmed sci-fi movie. It certainly has this feeling about it, you can almost see credits rolling up the screen over some of the tracks here.

The music found on Galactic Melt sounds vintage and analogue throughout. ‘Terminal’ opens the album, a quick two minute track that sets the scene with its synth laden melody, for what is to follow over the next ten tracks. ‘VHS Sex’ has an Italia disco house flavour with a bit of Kraut rock tinged around the edges. Vocal loops and high pitched synths underscored with a slow mechanical beat make up this track complete with video featuring a montage of cringe-worthy Top Of The Pops style performances and…aerobics. It marks the beginning of the four strongest moments on the album, the next being ‘Cathode Girls’ beginning with staccato keyboards on what is a funk laden track. ‘Air Cal’ has a pumping bass that sets it apart from other numbers on the LP, and one of the most dance-floor friendly. ‘Flightwave’ has a computer sounding voice announcing the title with glimmering synths and a delicious groove entering the mix at the one minute mark. ‘Hyperlips’ embodies in one track how Harley has described the album; “mid-fi synth wave, slow motion funk”, it’s one of the most cinematic found on Galactic Melt, you can almost see the blue screen dodgy special effects as you listen.

‘Brokendate’ lumbers along in a confident way and builds up as it progresses, it gets better with every listen. ‘Glawio’ is a standout track, that cruises along nicely. ‘Ether Drift’ has a fitting title, a slow and steady trip layered with a multitude of beats and bleeps sliding nicely into ‘Future World’, closing the LP suitably. Hints of early New Order can be heard here, and it’s a more energetic offering than other tracks on the album staying up throughout its three minutes. The music on this debut is familiar and at the same time new. What we Gen X-ers heard as snippets in 80s TV ads, and through arcade machines are fleshed out to their musical logical conclusion with Com Truise. Nostalgia aside, this is an enjoyable album, the best of both worlds. Those great 80s sounds while we sit here in 2011.