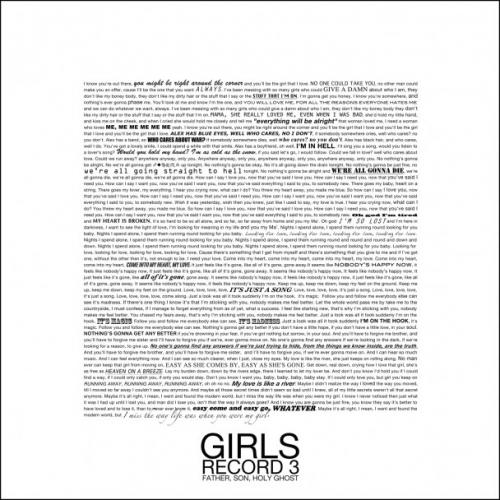 It doesn’t seem so long ago I sat down and wrote a review for the debut album from San Francisco’s Girls. That album, called, Album, became an indie staple and cemented a place for Christopher Owens and Chet ‘JR’ White in playlists and music libraries everywhere. The follow-up EP Broken Dreams Club just left us waiting for more. Now, with the sophomore LP Father, Son, Holy Ghost, the boys from Girls have shown another side to their diverse breadth and range.

It seemed as natural as osmosis the way Girls infused certain 60s sounds into Album, and now they have moved forward a decade to the 70s to do the very same thing on a number of tracks. From big stadium guitars to smooth and sensual female backing vocals dripping with sensuality, this LP has several genres covered, while carefully and firmly stamping their individual mark all over it. The pathos of the first album continues, with songs of lament and reflection scattered throughout the eleven song track list. But not to despair, there are enough rays of light beaming through the storm clouds to leave you feeling uplifted rather than melancholy at the end of the albums journey.

‘Honey Bunny’ with its pure sweet pop sensibilities begins the show, as we hear Owens sing about his boney body and his dirty hair, launching straight into the self deprecation that has always been there in his lyrics. ‘Alex’ follows featuring the first hints of the turned up lead electric guitars that are prominent throughout this LP, and in this track doubling Owens’ more subdued vocals.

‘Die’ begins with an explosion of guitar as its stadium rock and twinges of metal takes hold in a track that leaves the vocals behind. Then all of a sudden the glaring lights and blaring sounds fall away around halfway through, and now you realise, how good this album is going to be, and what a treat we are in for. No sign of a bedroom studio here that’s for sure. ‘Saying I Love You’ is utterly infectious, with a gorgeous Spanish guitar influenced bridge and unlike anything we’ve heard so far, the aforementioned range is astonishing.

‘My Ma’ marks the beginning of a holy trinity of tracks found in this middle section, the slow jammed bliss highlighted by the simple structure and incredible female backing vocals that add that something special. It’s completely sexy. Maybe I’m just visualising the three girls from Pink Floyd’s ‘Great Gig In The Sky’. Pass the reefer and settle in for ‘Vomit’, a theatrical and majestic ballad and complete standout.  “Nights I spend alone, I spend them running around looking for you, baby” the atmosphere carried in the track is palpable.  ‘Just A Song’ spirals further down the hole, “Seems that nobodies happy now, Feels like nobodies happy now”.  ‘Magic’ returns to pop and lifts the mood. ‘Just a look was all it took, suddenly I’m on the hook, it’s magic, I feel like starting anew”.

The closer to Father, Son, Holy Ghost is ‘Jamie Marie’, (is it a relative to Lauren Marie from the first LP?) It has a beautiful and strong riff, and Hammond blazing to make a fitting end to this 54 minute impressive follow-up, to what was universally praised as an impressive debut.  The fact that Owens had no exposure to music during his childhood almost makes it seem like he is discovering it for the first time through his own. The boys from Girls have created a sound that while incorporating the ghosts of the past, is truly and solely their own.