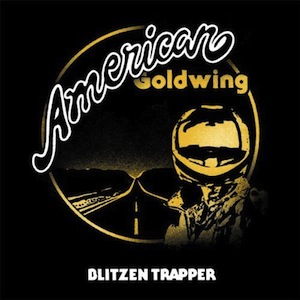 Sub Pop
Buy here
The atmosphere of the open road, bullet riddled signs and dusty roadside diners are the images conjured up with Blitzen Trapper’s sixth studio album, American Goldwing. The title itself referring to the fat Honda cycle designed for this experience. The Portland, Oregon sextet have been active since 2000 and have a swag of musical styles that have been attached to their name over the year, with most including the suffix or prefix ‘folk’. Be it country, rock, indie, alternative, whatever, they have become a band on the rise and Eric Earley has shown himself to be a talented singer songwriter in the process.
Hot on the heels of last years’ Destroyer LP, American Goldwing continues their no frills take on the American musical past with a solid contemporary edge. The comparisons vocally to Mr Dylan will always be there but this music is capable of standing strong in its own right. ‘Might Find It Cheap’ thrusts forward immediately as the opening track, unapologetically country and rock fusion, and one that admittedly takes a couple of listens to take in. It is never a bad sign to have to sometimes work for your music, no doubt some of my most favourite has had this process, and the rewards, as you would well know if you love your music are well worth the effort.
Frontman Earley has said of the album, “When I sing, in the title track, “I know / I know / I’ll be staying if the wind don’t blow,” I’m seeking to invoke the unseen, the spirit that beckons you to saddle up that old 1980 Honda Goldwing, or your uncle’s beat up Ford Bronco, or that Jeep you somehow, and only barely, keep running and leave this lonely town behind, ‘cause that wind’s always blowing”. The America of today is a far cry from the romantisiced and nostalgic look back we have here, but the way it is encapsulated on this LP, is as if looking back in time a couple of decades, when it was all much simpler.
‘Fletcher’ with its fictional hitch-hiker character “drinking whiskey from a jar through his teeth” is a free-wheelin’ stomping track, before the give-away single ‘Love The Way You Walk Away’ comes in, with its harmonica and breezy guitar complimenting Earley’s vocals. There are a few times where the word ‘hoedown’ has the possibility of springing to mind at certain points through this LP, and none more so at the front of ‘Your Crying Eyes’. This opening soon descends into a screaming riff which gives this track balls like a Mac truck screaming down Route 66. The imagery continues into ‘My Hometown’ and ‘Girl In A Coat’ with descriptive lyrics of a bygone era and vocals at their most yearnful.
‘Street Fighting Sun’ is an infectious rock track at its best, and in a good place at the back end of the album. ‘Stranger In A Strange Land’ takes it all down a notch or three, with just acoustic guitar, piano, vocals and a smattering of harmonica ending the album in a place that’s just right, as he sings “The highway, which runs far but never my way, don’t you know”. Red tail-lights disappear and fade to black, where Blitzen Trapper travel to next is anyone’s guess.