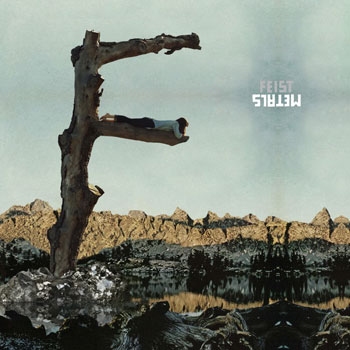 Leslie Feist’s incredible voice is known to millions but her name maybe to not so many. Her smash hit from 2007’s ‘The Remainder’, had an immediate impact and was snapped up by one of the world’s biggest brands to hawk its wares. The song, ‘1234’ was massive, and in production was known simply as ‘Sally’s song’ after Aussie songstress Sally Seltman (of Seeker, Lover, Keeper) who penned the tune. The album was nominated for a Grammy and the pressure was on, what was to come next? Well, the answer was nothing for four years. Having publicly stated that she might not have made the best move by leasing her music for ads and playing big arenas, Feist has made a superb comeback on her own terms with this fourth LP, Metals.

Superbly produced, and noticeably different, this album showcases her extraordinary song writing abilities and versatile vocals. From the first instance one notices an atmosphere is prevalent on Metals that has been explored in some of her previous tracks, but never fleshed out in full as we have here. Many artists seem to find that extra edge in recording and production by ostracising themselves from the world at large, whether it’s in the desert of Arizona (Hawksley Workman) or an old abandoned church in upstate NY (Women), I guess there is a purity in the beauty of immersion. Feist did the prep work in Toronto, getting the compositions together with long time producers Chille Gonzales and ‘Mocky’, then headed south to the Californian coast. Here they set up a studio in the clear air and wide open spaces of Big Sur and recorded with minimal over-dubs, the clarity and crispness is evident. Also, the location is clear and present in a literal sense with the tracks on Metals, you can almost hear the camp fire crackling and see the sunset flaming over the ocean. The F shaped tree on the cover, with Ms Feist draped seductively across the branch is real as well.

‘The Bad In Each Other’ is the opening track, and straight away the tone is set. A song about a couple who can’t find the good in each other, “We have the same feelings, just at opposite times”, is a long way from the quirky Feist found on Apple ads four years ago.  There are no jump-out hit singles to be found here, and it feels a conscious decision. There is rich instrumentation all over this LP however, strings, brass, loads of percussion and effective backing vocals, sometimes male, sometimes female, sometimes Feist herself multi-tracked into a gorgeous swirl of harmonies, used effectively on the second track, ‘Graveyard’. This begins slow and steady, building up progressively and featuring a killer hook. ‘How Come You Never Go There’ is one of the catchiest tunes on the album and rolls along like an old boiler, heavy and full of momentum, the female backing vocals even recalling a steam train wailing its whistle across the open spaces . ‘A Commotion’ has the aforementioned male backups, shouting together full of energy, you can almost visualise a campfire encircled with them beating drums as they chant the title of the track.

‘The Circle Married The Line’, with one of the most poetic titles I’ve heard, is full of majestic imagery of the many beautiful sunsets seen over the Pacific Ocean while they recorded Metals, has a distinctive folky edge to it, “I’ll head out to horizon lines, get some clarity Oceanside”. ‘Anti-Pioneer’ begins in a sexy and bluesy manner, and feels beautifully produced, a sign that Feist began this track ten years ago, trying again and again to get it right. She has achieved that, it’s one of her most affecting songs, shining a bright light on her adaptable vocals while not overpowering the amazing orchestration found within this track. Toward the end of the song a mass of strings swell out of nowhere and vanish just as quickly, like a gust of wind in the wilderness. Her voice drifts in at its most gorgeous to complete it. It almost leaves you breathless.

‘The Undiscovered’ again features her multi-tracked vocals, beside stomps of percussion with brass joining in for the last couple of minutes. It conjures images of a barn dance at times. ‘Cicadas and Gulls’ is acoustic, around-the-campfire music, and that is not meant as a criticism, it’s very sweet, “The land and the sea, are distant from me, I’m in the sky”. It glides beautifully into ‘Comfort Me’ the two songs sounding like they belong together as a set, until halfway through things change abruptly as the mood gets darker and abrasive, as she sings “When you comfort me, it doesn’t bring me comfort actually”. ‘Get It Wrong, Get It Right’ is simple and yet has a lot going on, it’s best listened to with headphones, (and preferably on vinyl). Tiny bells jingling, piano, strings, it sounds like a room full of people behind her, supporting her, like there is a lot of love in the room, it comes across somehow.

Metals is the album that it seems Feist always had in her. The closing track on this LP seems perfectly positioned and titled, not that she has been ‘getting it wrong’ over her incredible career, not at all. From her beginnings in punk with Peaches under the name of ‘Bitch Lap Lap’, to her as a member of Broken Social Scene, it seems like Feist has finally brought it all together to ‘get it right’ with Metals, the album as big as nature itself and almost as perfect.

From the album, ‘Metals’, Cherrytree

How Come You Never Go There

From the album, ‘Metals’, Cherrytree