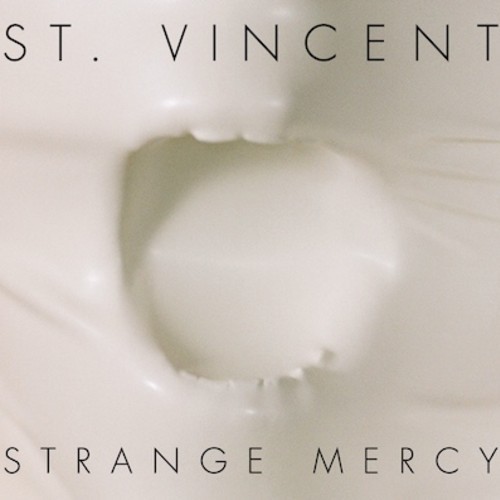 Beautifully abrasive. These two words set together best describe the third album, Strange Mercy from the extraordinarily talented American singer-songwriter and instrumentalist Annie Clark, artistically known to all of us now as St. Vincent. Strange Mercy is a strange album, strange though only though in terms of its brazen,  originality. It’s determination to take traditional pop and theatrical song structures and stretch them beyong their limits is palpable, as it twists and pulls at acceptibilities and confounds expectation at every turn. Largely gone are the pastoral sounds found on Marry Me and Actor, replaced by shredded guitar, caustic synths, electronic effects and restless beats. And the lyrical stylings suit well the intense musical direction. Clark has pertinent things to say and Strange Mercy conveys them well. That’s not to say that the album is all ‘in your face’ angry and dark, as moments of optimism, humanity and Clark’s angelic voice together make it a far more complex affair than that.

Clark deals with the difficult rather than just railing against it, trying to understand and treat the pain associated with love and loss. Strange Mercy seems a catharsis of sorts. Opener ‘Chloe In The Afternoon’ quickly announces its intentions as Clark starts with a nice yet strange synth note before guitar splurges on to the scene. The lyrical intention is not immediately clear but soon the lines ‘no kisses, no real needs’ melded with ‘grab my shoal, back to work’ could be seen as utilising the absence of feeling in financial transactions for sex as a more targeted broadside at the casual disaffection existing in real life.

‘Cruel’ is less cryptic and makes its colours known against the casual inhumanity that infiltrates the modern world, ‘bodies, can’t you see what every body wants from you’. This is not to say that cruelty in all its over and covert forms is a modern phenomenon, it’s just that those who commit to that sort of behaviour are now very conscious of what they are doing and who is watching.

In a time where it’s growing painfully obvious that a new world paradigm is needed, Clark on ‘Cheerleader’ is more obvious in her distain for the worst elements of her country and launches a self-criticism of sorts for past affability and acceptance of its shortcomings or more to the point the shoulder shrugging of others who know better, ‘I’ve played dumb, when I knew better’, ‘I know honest thieves, I call family, I’ve seen America, with no clothes on’, ‘I don’t want to be a cheerleader no more’. And although an intensely personal song, the critique is continued on the exquisite closing track, ‘Year Of The Tiger’ where Clark seemingly metaphorically cautions against the falsities of capitalism and sings repeatedly and wryly ‘Oh America, can I owe you one’.

‘Surgeon’ is one of the most apparent illustrations of Clark skirting between beautiful and ugly both in a lyrical and musical sense. Almost stage like theatrics abound musically in its early stages before the song builds to its prog-like freak out as Clark strangles the living daylights out of her guitar . It’s like she is actually being cut open. ‘Northern Lights’ continues the theme of gullibility that seems to traverse the album, ‘I saw the morning Northern Lights, Convinced it was the end of times’, squarely aimed at the grip that end of days evangelicalism has politically in the US.

While the title track takes things down a notch sonically with it’s contemplative melody and awkward beat, Clark commiserates with the victims of underlying brutality emanating from a seemingly benign system, ‘if I ever meet the dirty policeman who roughed you up, no I don’t know what… I’ll be with you lost boys, sneaking out where the shivers won’t find you’. Written well before current events, Clark’s talent seemingly extends to uncannily being able to predict the future, or is it that she has just learnt from history? The carefully measured ‘Neutered Fruit’ laments the flighty nature of many relationships while the balladry of ‘Champagne Year’ doesn’t exactly let us off the hook but accepts the difficulties of feeling helpless in the face of personal and social adversity; ‘It’s not a perfect plan, but it’s the one we’ve got’, ‘Cause I make a living telling people what they want to hear, but I tell ya, its gonna be a champagne year’. ‘Dillettante’ doesn’t immediately reveal itself but repetition will see its outro envelop you and take you to a special place. And that is the thing with Clark, her music challenges and extends but ultimately nurtures and rewards. ‘Hysterical Strength’ is indie pop at its edgy best resting on a simple metronomic base as Clark and producer John Congelton skillfully add the carefully constructed embellishments.

It took me some weeks to even go near Strange Mercy let alone listen to it. I knew it would be difficult, I knew it would take effort and I knew it would confront me. I would not expect anything else from Clark. But in the end I knew it would ultimately repay and reward, even if those words seem inappropriate given the record’s subject matter. But that is what you would expect from a true artist who is true to herself. Art is meant to difficult, obscure and  inpenetrable. After working at it, probing it, understanding it and intellectually processing it, great art will slowly reveal itself in an intensely personal sense but then at the same time will again in turn probe, engineer self doubt and impose questions. Clark doesn’t make her art for us, she makes it for herself and makes us come to her, albeit after procrastination and hestitation in a ‘what is she going to do to me’ kind of way. I tell you what she did to me. She made me think. A priceless gift. Strange Mercy is a stunning work of stark music originality, elementally rich in every sense and may indeed be the most impressive thing in independent music seen for some time and perhaps for some time to come.

Year Of The Tiger

From the album, ‘Strange Mercy’, 4AD.