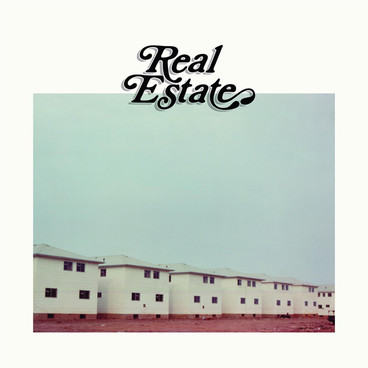 Real Estate are supposedly dedicated to producing simple, uncomplicated music. From the languid reverb laden sound, the honest to suburban lyrics to the chilled out song titles, Days, the bands follow up to its impressive lo-fi selt titled debut, could of easily just turned into a nice record, easy to embrace, but also easy to let slide by.  However, the sparkling and inventive guitar work on both a technical and composition level from Matt Mondanile and Martin Courtney and underpinned by solid, muscular bass from Alex Bleeker turn Days into something else entirely. Sure, the album is easy to embrace but the sonic freshness, clever, yet understated arrangements and intelligent use of melody combine to ensure that Days will stay the course.

Like their contemporaries, Beach Fossils, who have also polished off their rough edges and left behind the lo-fi stylings, this is more about what the band could produce with some cash behind them than some deliberate binning of their past. There was more than a hint of what was to come when they released the astoundingly ear worthy ‘Out Of Tune’ last year, a track that has more than stayed the course twelve months on. Every note is meticulously structured and the duelling guitars of Mondanile and Courtney are not just evidence of their growing virtuosity; they combine to create music gold. The deliberate rhythm of Bleeker and then drummer Etienne Duguay paces the song perfectly and allows the guitars to shimmer and shine. Unlike many tracks that are released well in advance of the album they belatedly appear on, ‘Out of Tune’ remains essential to the continuity of the album, sitting as it does as the centrepiece.

Each song is beautifully situated. Opener, ‘Easy’ is a blissful beginning and the opening lines are telling in regard to what Real Estate are about, chanelling the suburban simplicities of youth, ‘Back when we had it so easy, I would surrender completely’. Mondanile’s beautiful guitar line and hook is resplendent with the pinings of Courtney’ lyrics while rhythmically, those pinings are given free reign to breathe. The gorgeously paced ode to autumn in the suburbs ‘Green Aisles’ is a standout with its stunning melodic beauty and clever use of keyboard to create slide guitar musings that double up for vocal harmonies which perfectly compliment Courtney’s wistful delivery. Mondanile’s break is a hypnotic reverb drenched pleasure. ‘It’s Real’ changes up the pace nicely with the band tweaking it a little from when they first played it live last year. The frenetic second half, while its lost some of its lustre due to the absence of a held note that gave it extra spark, indicates Real Estate have more to their bag than the laconic rhythms. ‘Kinder Blumen’ is an instrumental track of two halves, a very simple melody dominates its beginning before spaced out guitars intervene to give atmosphere.

The second half of the album begins with the familiar sounding melody of ‘Municipality’. Harmonies abound as Courtney laments his subject not being able to follow his heart; ‘to be by your side in a new municipality, that’s not anything like my reality’. But the title is telling, Courtney’s protagonist isn’t speaking about a move to the inner city, simply a suburban swap. Bleeker takes the vocals on the simple little ditty, ‘Wonder Years’ with its do-do-do harmonies taking us back to the jangly pop of the early 90s. ‘Three Blocks’ has wonderful syncopation sitting underneath a slowly delivered vocal structure and noodling guitar. ‘Younger Than Yesterday’, a track that shares the title of the fourth album by the original kings of jangly pop and undoubted influence, The Byrds, is another standout as it ebbs and flows but never meanders, resting on a simple low tuned guitar line and sporting an almost almost Fleetwood Mac like flourish towards its end. The seven minute long final track, ‘All The Same’ shows no signs of being that in its beginning stages. Drums patter away as guitars jangle and sparkle during its verse before Courtney’s dreamy vocals combine with a simple bass note change from Bleeker to make it the most emotive track on the record. It perfectly sets the scene for an almost psychedelic outro that leaves a lasting impression.

There is little doubt that Real Estate wear their influences outwardly and do not in any way try to hide them. Courtney has ventured his wish to sound ‘timeless’ and from the aforementioned The Byrds along with c. mid 70s Fleetwood Mac, The Feelies (who they recently shared the stage with), R.E.M, the more conventional side of Yo La Tengo and Pavement, four decades of pop are all nostalgically given nods. But it would be a lazy reviewer who saw Real Estate exclusively through this lens. There was a more straightforward trajectory that distinguished the above artists, Pavement aside. What sets Real Estate apart is their willingness and ability to combine complexity and simplicity simultaneously. Those duelling guitar arrangements do not just simply arise out of thin air, nor does the idea to accompany them with smart, deliberate rhythms. Real Estate may pine for the simple and uncomplicated but what they’ve actually created here is quite complex. A complex and affecting sound accompanied by an impressive, ever-growing virtuosity, the kind of virtuosity that never overshadows the holistic context in which it exists.

From the album, ‘Days’, Domino.