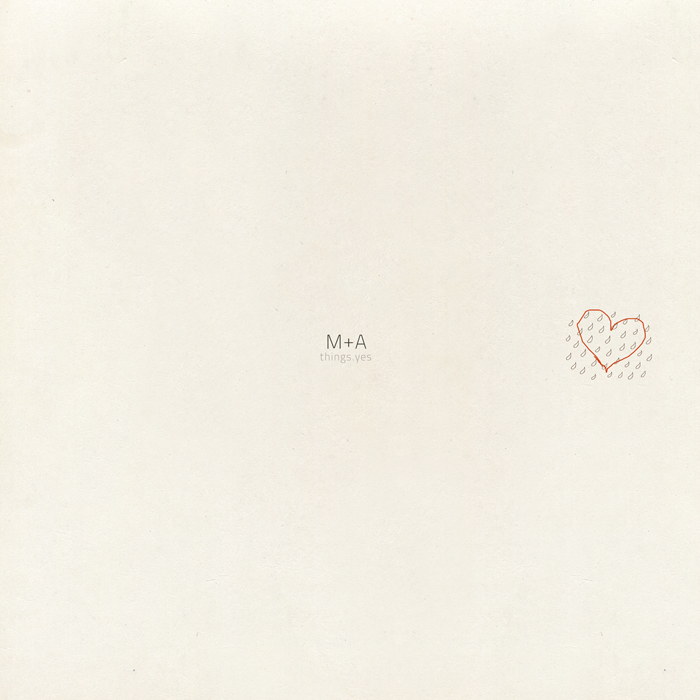 Italian duo M+A have shown their adeptness at combining a myriad of genres on their latest offering, the curiously titled, things.yes. Only just into their twenties, Alessandro Degli and Michele Ducci, in employing a layered and multi-genre approach manage to create a sound that is at once frenetic and cluttered while also managing to be languid and spacious. Pop exists in spades, with nods to past decades and is set together with doses of ambient music, folk and jazz and completed with splashes of dance music, from electronica 90s house, modern IDM, minimal drum n’ bass and even small doses of dubstep (or should that be quickstep). Stilted and obscure vocal samples and sound effects and a plethora of differently timed and sounding beats also abound. It might be argued that over the course of the album’s ten tracks, messrs Degli and Ducci have packed too much into things:yes. However, and quite amazingly, it’s what they have put in, not what they’ve left out that gives the album its fresh, natural open space feel. Indeed, while things:yes is an electronic record, M+A manage to get it to sound pastoral in essence, giving nods to the Italian countryside around their Northern Italian city of Forli.

Opening track ‘Yellow’ kicks off that pastoral sound with a dose of flute that dominates throughout as the fast paced beat and Ducci’s layered vocals enter the fray. All three combine to set the tone for what is come. Second single, ‘Yes.pop is just as its name suggests, a sugar coated dose of exquisite pop beauty. Finnicky percussion is complemented with breezy unintelligible vocals and starry eyed synths to create that aforementioned space that is central to the album. The single that preceded it, ‘Liko Lene Lisa’ was the first track heard from the album back in October, rest on a big beat interspersed with delicate piano before gorgeous trumpet take centre stage, harking back to the lounge era of the 70s. ‘sommer’ sports a house feel and has a sample of a dog barking that makes up the hook that sits atop of a layer of diamond synth. There’s a definite dose of late 90s house vocal sampling that appears toward the back end to great effect. Its the attention to detail in combining these disparate elements that makes the track a definite standout. ‘Bam’ ends side one and starts off with layered vocal samples before Ducci enters the fray with one the few vocal efforts on the album that can be almost made out.

The obscurity of the vocals throughout things.yes is certainly deliberate as M+A seem determined that no one element will outstrip another on any track. Indeed, both have said that they are not in the game to preach anything to anyone and above all wish to leave it to the individual listener to make of their music what they will. ‘There’s no real language, it’s unnecessary for what we’re trying to do’, Ducci says.

There’s definitely a more dance feel to the second half of the album whereas pop largely dominates the first but both elements co-exist seamlessly side by side throughout. ‘Blå’ with its glitchy gamey vocal beginning gives way to a big dance beat that is joined by what is seemingly a doorbell jingle played with xylophone. ‘(we)’ dazzles, sparkles and twinkles all the way through its dreamy four minutes. ‘Bergen.jpg’ invokes a choppy beat that is surrounded by unsettling, warped and off pitch vocals but typical of Degli and Ducci is offset by warm synth base and flourishes of sonic optimism. ‘Adidias’ is a club stomper and the most danceable track on the record twinning a four to the floor beat with 90s house style wrap around before moving down a jazzy path towards its climax. Final track, ‘Ly’ is a glitch laden gem that sports nods to minimal techno and ambient music and combines them with pitched pop.

M+A have produced an album that uses many elements that others have invoked in the past. But put together, nothing has ever quite sounded like things.yes. Many have mastered the approach that M+A have taken but this album more than value adds to the trajectory of that. The secret is in the arrangements. Degli and Ducci, by packing so much into one record, even into individual songs, could of easily got it so wrong as many have done before them. The fact that they don’t only not get it wrong but actually get it so right by construct organic and intelligent compositions where nothing jars up against anything else and each subtle and not so subtle change works every time is suggestive of the musical talent of both. On things.yes, M+A have taken seemingly disparate and incompatible musical elements and adeptly stitched them together to produce a seamless sonic tapestry full of vitality and energy creating an end result that is as intelligent as it is accessible. No mean feat, especially when you consider how young the creators of said intelligence and accessibility are.

From the album, ‘things.yes’, Monotreme Records.