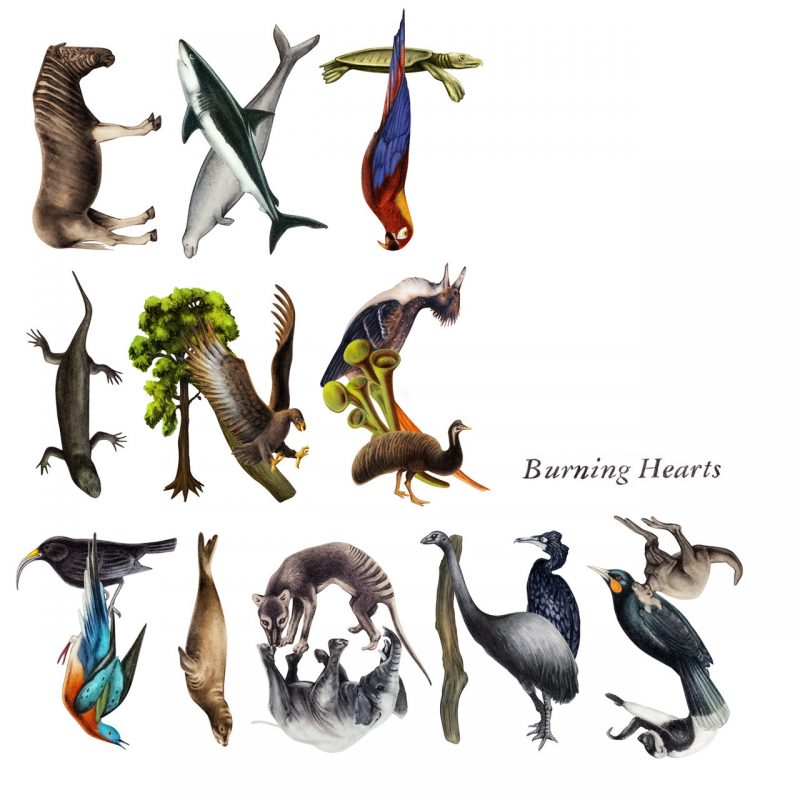 RECORD REVIEW: BURNING HEARTS – EXTINCTIONS
It’s been seven years since multi-instrumentalist Henry Ojala (Cats On Fire) and vocalist Jessika Rapo (Le Futur Pompiste) met on a joint tour and decided over time to collaborate on a new project that would become Burning Hearts. Their debut album, the upbeat Aboa Sleeping would appear five often difficult years later in 2009, full of sweet pop melodies and juicy hooks; a pretty straightforward record that did however, contain electronic elements that suggested the potential was there for growth in less predictable directions.  After the single ‘Night Animal’ in 2010, the trajectory was clear. Upon the release the impressive EP Into The Wilderness last year, it was apparent that the talented Finnish duo were taking a turn in a more expansive direction, utilising loops and more unconventional song structures. Indeed, the brilliant title track, with its cleverly crafted looping underbelly and metaphorical sound is ample evidence of this. Thankfully because it fits, it also appears on the subject of this review, their second album, Extinctions.

Sporting a bigger and more polished production than previous recordings, Extinctions affords Rapo’s uniquely accented, and warm yet disaffecting vocals and Ojala’s beautifully crafted and meticulously executed pop the sound they deserved. The uncanny creative relationship the two have comes through loud and clear as vocally and musically its a seamless match. Amazingly, while complementing each other they also allow each other the right amount of space. Rapo’s vocals could have dominated this record but they don’t giving Ojala room to work his hook laden magic.

Lyrically, it’s a thematic record where the difficult subject matter belies its optimistic sound. The title of the album is telling. Death lurks at almost every turn, a result of tragedies that affected Rapo and Ojala and inspired the subject matter. However, despite the surface morbidity, Burning Hearts pop sensibilities could never allow Extinctions to become overtly dark and difficult. In fact, what they have actually created is nine expansive and organic pop gems that live and breathe optimism and hope; a realisation that while death is omipresent and inevitable, there’s no need to wallow in it. Having said that though, Rapo and Ojala are determined to remind us that as human beings, while there exists fragility, we can do some horrible things because many of us think we are above nature, not part of it.

‘On The Last Day Of The Decade’ begins with a funereal tone as Rapo authoritatively enters the fray with the line ‘A man picks up his shotgun…’  over a deliberately paced beat that is retained throughout. Over its four minutes, the track slowly opens up lyrically, revealing an unsettling feel with a hunter determined to catch his prey, a metaphor perhaps for the avarice and greed that exists in the world. But musically, the track builds and builds and explodes towards its end into a cacophony of sound dominated by a simple, yet killer melody. The aforementioned ‘Into The Wilderness’ is the best thing the duo have done. A sparkly loop set things off and remains there underneath for the song’s duration while the drum sound is programmed to reflect it’s title. There is definitely a wilderness feel lyrically with talk of Alaskan treelines and permafrost. But what’s telling is that the destination of the wilderness is equated with escaping from loneliness and the music accurately reflects this.

Ojala’s beautifully lead guitar melodies stand out on the patiently crafted ‘Modern Times’. Nothing is hurried here as the song ambles along sweetly. Chorus wise, Rapo’s ooh aah’s are completed by Ojala’s clever chord structure. The reverb drenched slow burner, ‘Love And Dissonance’ lessens the pace and sports an example of what was mentioned earlier, that Burning Hearts are more than willing to be unconventional. The beauty of the track is broken up twice by an attack of unsettling noise, that dissonance mentioned in the track title.

The rumbling swing of the drum beat takes centre stage on ‘The Swallows’. The track is an exmaple of how well Rapo and Ojala give each other the space they need. The former sings two lines, an almost verse cut in half before Ojala intervenes to complete it with a lusciously gorgeous hook. It works brilliantly taking the tropical swing of the track in a different and unexpected direction. Second single ‘Burn Burn Burn’ begins in a deceptively unobtrusive way before kicking into fourth gear. The landscape’s physical features and primitiveness return as organic metaphors for Rapo’s defiance in the face of fears, ‘I’m covered with flames, my skin’s on fire, but I won’t burn’  along with the chorus refrain; ‘Over the deserts, into the forests, I run as a child, to hide from my hunger, my biggest fear, I fight with my hands and my spear’.

‘Trade Winds’ as the title suggests has a nautical theme, an optimistically, overtly pop sounding tune with beautiful harmonies. ‘The Beast’ ebbs away with a hopeful disposition but Rapo reminds us of our fragility ‘You think that you are a King, but within a blink of an eye, you could go extinct’. Ojala’s guitar work here is a triumph of beauty in simplicity. The final track ‘Deep Waters’ begins with Rapo’s spirit like vocals alone with a single synth note before going aquatic in a musical sense with every instrument running together like a stream cascading from a mountain.

It’s not often a reviewer can mention the words cinematic and pop in the one sentence or even in relation to each other. But cinematic pop seems to perfectly describe the Burning Hearts disposition. Rapo’s nature laden lyrical metaphors are expertly tracked and captured musically. It is precisley because Ojala holds court over every instrument and device in the recording process that this is possible. There’s a connection, an intimacy in these songs that is palpable, where two artists at the peak of their powers are almost in telepathic contact. You can almost feel yourself transported to an arctic wilderness or some tropical haven. It’s been a long road for the talented duo with many roadblocks along the way, but with an album of such unique pop brilliance now under their belts, lets hope Extinctions gets the attention it deserves. Rapo and Ojala have done the hard yards and gifted us nine expertly crafted pop gems, now its the turn of purveyors of independent pop music to repay the favour.

From the album, Extinctions’, Solina/Shelflife