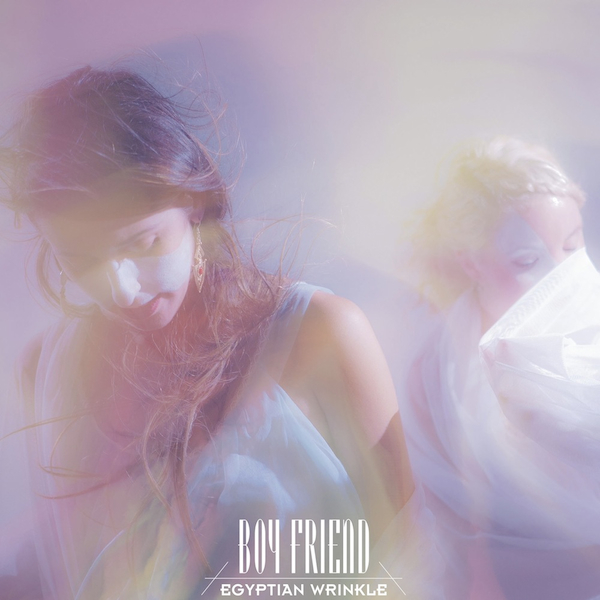 There is little doubt that the dreamy chilled out fare served up by Austin duo Boy Friend can polarise. With the chillwave genre now in the gun sights of many a critic, not only for its supposed imminent demise but for its existence in the first place, anything that sounds remotely like it has come in for some quite fierce criticism recently. Unfortunately, the debut record by Christa Palazzolo (vocals, synths) and Sarah Brown (guitar and backing vocals), Egyptian Wrinkle has been lumped in with it.  Since its release early last month it has been derided by a few on the back of this general trend. Indeed, Boy Friend have seemingly suffered from the fact that many have decided that chillwave should never have seen the light of day in the first place, either as a term or a genre of music.

This ignores that there has been many a annoying term to ascribed to music genres over the journey, ‘shoegaze’, ‘nu-metal’, ‘dubstep’ to name but three. It also ignores the fact that the artists that have been labelled thus, Washed Out, Toro Y Moi, Small Black et. al. have used, like many, elements of a past era to forge an all together unique sound that is definitely in essence, futuristic. And it’s the future that in my view will be kind to the dreamy soundscapes that this genre has produced. So it is with Egyptian Wrinkle where time will prove the critics hasty in their unthought out criticism. Having said that, its arguable that Boy Friend’s sound contains anything more than just a few tenuous links to the aforementioned term or artists.

Since leaving Stefanie Franciotti and SleepOver late in 2010, good friends and multi-facted artists Palazzolo (also a visual artist) and Brown (a jewellery maker) quickly built on their on again, off again collaborations over a long 15 year period with the release of the their promising cassette only self titled EP. That was then followed up with instantly impressive 7″ single, ‘Lovedropper’ early last year. That and two tracks from the EP appear on Egyptian Wrinkle, and the new songs produced since consitute an album that continues in the same vein as those early tracks. Dreamy layered vocals and a deep yet optimistic wall of synths are completed by a deliberate, laconic yet massive drum sound in the mould of Cocteau Twins. That essentially is the Boy Friend formula and it is that which has landed them in the sights of the critics, many of whom label the approach as listless and bland, even sombre. But by doing this, they ignore the rich tapestry of moods that Palazzolo and Brown have woven through each track. I don’t find this a cold and distant record as others do, but rather warm, atmospheric and inviting. Far from being staid, each track builds up at a slow almost sub-conciously engulfing pace and repeated listens will be kind to the patient recipient.

The album is bookended by the two part non-lyrical trance like ‘Rogue Wave which serves the purpose of setting the tone and theme for the other eight tracks. ‘Breathe’, only a minute long capella performs the same function. The previously released tracks from the EP, the optimistic sounding, reverb drenched ‘Lazy Hunter’ and pensive ‘The False Cross’ get a much needed makeover from Maurizio Baggio and Marco Rapisarda who mixed and mastered the record in Italy after the initial recoding sessions in Austin under the watchful eye of Christa’s twin sister Cari. Indeed, the Italian connection gives the record another dimension. Among the new tracks, ‘Bad Dreams’ begins with that big drum sound as synths move inexorably around layered vocals while ‘Lovedropper’ is without a doubt the album’s standout. With its double beat and swaying percussion, it meticulously builds to a point where its engulfs you completely without concious realisation.

‘In Case’ has an ethereal feel as Palazzolo’s relentless vocals provide a perfect counterpoint to Brown’s physically sparse but sonically rich guitar while the title track was a perfect choice to give way to promote the record. It does follow the lead of ‘Lovedropper’ somewhat but unlike that track maintains a fantasy like feel consistently throughout. ‘The Lair’ spectrally ebbs away nicely and is dominated by Palazzolo’s voice until Brown’s guitar combines with her synth to finishes the track with a flourish.

There’s no need to over think things in the case of Boy Friend’s music, nor sound. Palazzolo and Brown just simply want to make mood inducing pop songs that are personal documents, at once obscure but overwhelmingly penetrable. Yes, while the critics have a point when they claim to be underwhelmed by the lack of variety on the record, Egyptian Wrinkle is theme oriented and a product of time and place and Boy Friend seem unashamedly content with this. Having said though, that it is a product of its time and place, I’d like to place a wager that nevertheless, it will stay eminently listenable for a long time to come. More’s the point, it whets the appetite for what the talented yet modest duo will produce from here.