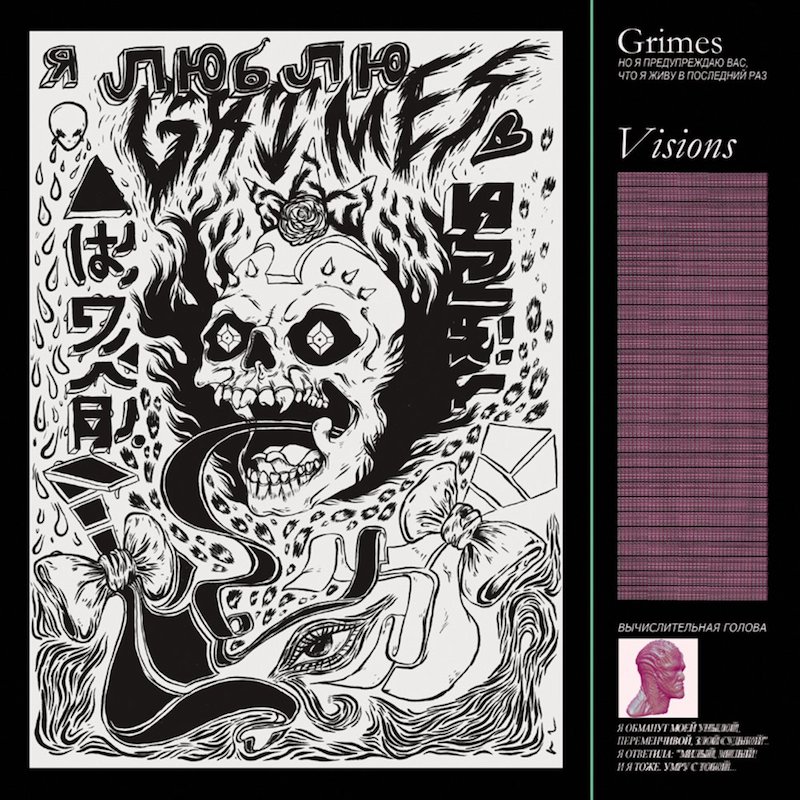 Twenty-something Claire Boucher has produced her own distinctive style of sound in her short career, something that must frustrate the hell out of those people who must classify everything they hear. As we have said here before, the proliferation of naming genres within genres has become something of a joke, and while Grimes drives down the avenue of electro, there is no need to invent new vocab for what she creates. Visions is best heard and then heard again. The magic of Boucher’s scope of talent unveils itself slowly, leaving you certain that this is where music should be in 2012. Pieced together using Garageband, she has created an insight into her glorious world of light and shadow, proving her to be one of the most talented artists on the indie scene today.

‘Infinite (heart) Without Improvement (intro)’ is just a morsel of what Grimes has in store on Visions. This one minute thirty six long track crams a lot in and packs a punch, showcasing Boucher’s abilities in vocals, production, engineering, orchestration, even the artwork done for the album cover, and the direction of the video clip for ‘Oblivion’. ‘Genesis’ comes up next, an accessible, tight piece laden with enough hooks, reverb and layers to keep it in your head all day, finishing with a beautiful bared down piano outro. ‘Oblivion’ is a standout track, another example displaying the myriad of directions she can take that unique voice. ‘Eight’, with its looped electro voice in stark contrast to Boucher’s high pitched vocals is a treat, ‘Be A Body’ builds up nicely in a track that would go down well on the dance-floor.

‘Colour Of Moonlight (Antiochus) (feat. Doldrums)’ brings things down in a good way, it’s smooth and gorgeous, perfect for late night/early morning listening. ‘Symphonia IX (My Wait Is U)’ continues the obscure track titles, and is another smooth one, ambient and with her voice pushed back in the mix. ‘Circumambient’ beginning with a slow and steady beat over what sounds like the crackle of a dusty vinyl, is another surprise on Visions. It features the lyric “Oh baby, I can’t say that everything is ok, ‘Cos I have a problem, and I don’t know how to solve them”, you can hear her vocals in pop mode on this one recalling the likes of Robyn in places. Its another example of the diversity found on this album, taking you somewhere unexpected on more than one occasion.

‘Vowels = Space And Time’ has that 80s edge that sounds so much better the second time around, for those of us that remember it. It’s another example of a club worthy track, synths glowing all the way through. ‘Visiting Statue’ is a step down from pop with its darker mood, and powers along making way for another standout; ‘NightMusic (feat. Majical Cloudz)’. After a theatrical intro the beats kick in and an indecipherable layer of Boucher’s voice (almost as another instrument) adds to the foray. Edgy synths and steady percussion accompany throughout until strings come in with operatic samples, it somehow works a treat. ‘Skin’ begins in muted tones until we hear Boucher, spotlighting her as if on a stage with a proscenium arch. Its beauty comes in the meandering path of its structure over six minutes, and the rawness to it, which sums up the whole of Visions.

‘Know The Way’ brings things to a close, with simple melody and layered vocals, a fitting way to finish, and to gently bring us back after an album that will make Grimes an act at the leading edge of music 2012 style. She is a product of the technology age and knows how to use it, instinctively. Visions gets better each time you hear it, and Grimes has cemented herself as an example of what indie is all about.