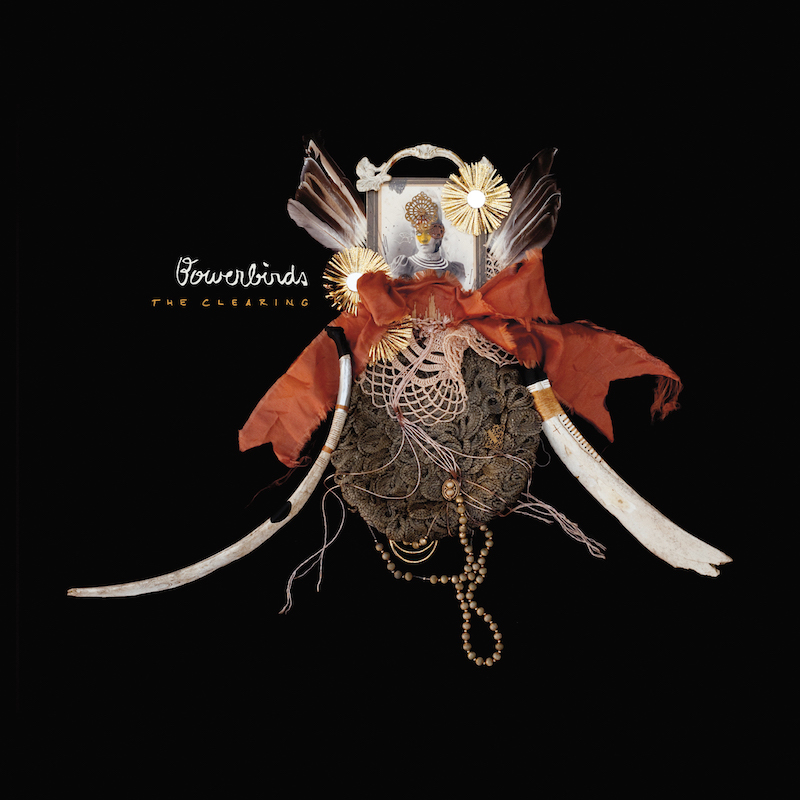 I first came across Raleigh folk/pop outfit Bowerbirds in a tactile sense three years ago when they did some live work for the Vienna cultural and media collective They Shoot Music. In a seemingly effortless canter, the trio walked and played their way around the fine Austrian capital showcasing songs off their second album, the 2009 effort Upper Air. Always impeccibly restrained, their thoughtful, unique brand of independent Americana and folk stylings blended in perfectly with their surroundings.

And so it is with their new record The Clearing, where each track presents itself as part of a seamless whole, a ride through nature, a document of not only musical virtuosity but intelligent songwriting. But the real story before its gestation period began was far from seamless and the break down in the personal relationship between principles Beth Tacular and Phillip Moore may have threatened to prematurely end the band itself. Thankfully for us they worked it out and eventually presented us with this fine album.

For the DIY couple Tacular and Moore, who have endured the break-up, Tacular’s illness and hospitalisation and hand-built a cabin from scratch over the last couple of years, The Clearing ended up being the end product of an intensely emotional ride in a personal sense where the theme of the record became finding the strength to overcome adversity from within and without. The music style of Bowerbirds does lend itself to revealing a certain emotional intensity and The Clearing certainly incorporates elements of triumph and despair, light and dark, themes that come through loud and clear. That they portray that emotion inside the music yet produce it so effortlessly speaks volumes about the artistic talent on offer here.

The lush orchestration and percussive elements of The Clearing builds upon the spartan and skeletal approach of their first two records, Hymns For A Dark Horse and the aforementioned Upper Air. The rich potential of those two albums has been realised here and it is in all likelihood that the trials and tribulations that surrounded the band going into writing and making the record that gives it its special character. Recorded with Brian Joseph in Bon Iver’s Wisconsin studio, the polish that marks the finished product, rather than muddying the waters, actually accentuates the human emotion and celebration of the natural world.

‘Tuck The Darkness In’ as its title suggests is indicative of that oscillation of thoughts between light and dark and masking the inevitable. What is also telling is its deliberate musical statement of growth in the Bowerbirds songwriting abilities as it shuffles inexorably towards its confident emotive conclusion. Album standout, the Tacoma sung ‘In The Yard’ begins with a pulsing beat and gorgeous chord structure and tracks the course of constructing that aforementioned house admist the natural world. The theme of nature is beautifully captured by the gorgeous harmonies at work the wistful instrumentation actually serves to transport you to that place of such tumult and wonder in the woods.

The plucky ‘Walk The Furrows’ extolls the worth of working through problems while ‘Stitch The Hem’ works through the difficulties of being on the edge financially and otherwise that stems from the decision to do things yourself; ‘There’s a hope that we have what we need’. Indeed, work, whether of the artistic, emotional or physical variety dominates The Clearing and is almost a lesson for those who think escaping from urban life is merely one big hoot. ‘This Year’ celebrates the seasons and the move from winter to spring and the optimistic relationship that is associated with our humanity; “I’m fairly sure we’ll find a clearing in the forest of our hearts”. But Moore soon reminds us in a subtle way that even out there in the woods there is no escape from the realities of the fallout from the decisions of powerful, short-sighted, selfish interests; “I’m not an activist, not in the purest sense, I’m not a pacifist, I know just which rules to bend”.

‘Brave World’ opens with percussive effects sitting atop a couple of pensive piano chords as it then begins to quietly pulse away belying the metaphorical subject matter of impatience in imperfection. ‘Hush’ is a return to the paucity that existed on previous releases and even sports a little Latin inflluence through its second half. Indeed, the album ends up slowly ebbing away from its lush beginnings over its last few tracks. That’s not a criticism, in fact it ends up being a strength. The sparse nature is again in evidence on ‘Overcome With Light’ which deliberately creates the space to go with its theme of introspection. Moore’s guitar dominates here as he reassures, “Yes, we had some scrapes, but now it’s right”.

‘Sweet Moment’ continues the penchant Bowerbirds have for matching song titles with the feel of the music as beautiful cooing harmonies take centre stage. However, as if to confound that theory immediately, the careful and delicate blending of piano, guitar and flourishes of percussive brushes on the following track bely what ‘Death Wish’ has in store for us as foreboding horns and strings serve to finish the track with the appropriate mood. Closing track, ‘As We Hurry On’ serves as a perfect conclusion to the record as Moore sings about the importance of taking in the little things in life; “what we see under the sun is what we get’…we used to see the forest, now we see the trees”.

The adoration of nature and do it yourself aethestic that drives the members of Bowerbirds in their private lives comes through in spades on The Clearing. Often, intensely personal musically journeys can often jar the senses and alienate the listener when overdone and overwrought. On top of this, many bands, who have made their reputation through resting on the sparse and restrained, once they have a few dollars to spend and plethora of musicians and instrumention to play with, actually end up overplaying their hand. Yet, not once does the band lose sight of who they are and why they ever existed in the first place. The Clearing serves as an example of how to use and own possibility rather than allow it to dominate and drown out what was once intended. As Moore sings the final line, “take your time with it, all of it”, attention to detail both personally and artistically is something we should never lose sight of.

From the album, The Clearing, Dead Oceans.