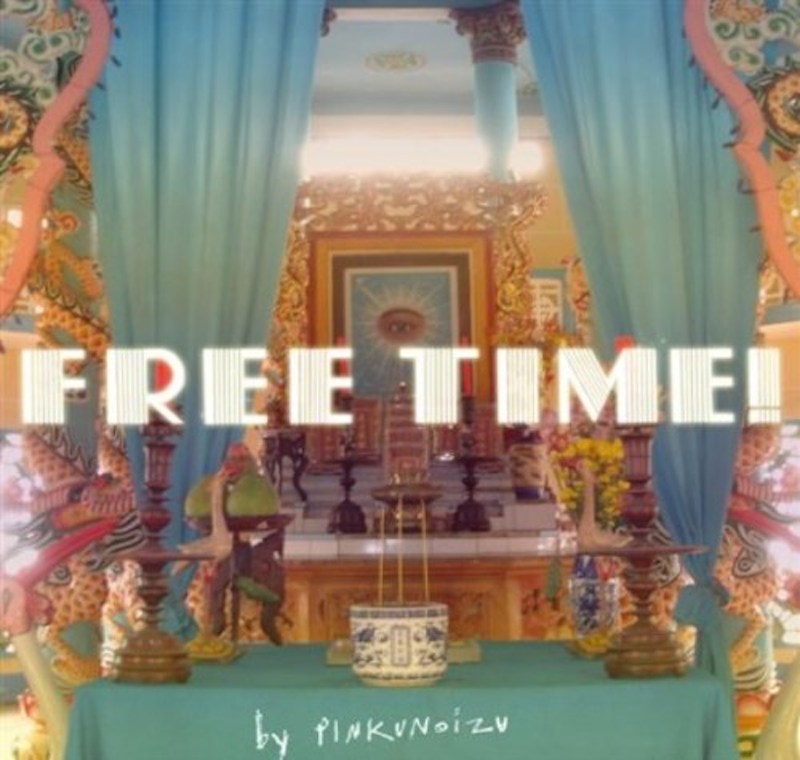 Danish psychedelic pop rock outfit Pinkunoizu are a restless bunch, both in style, influence and the myriad of genres they employ and this also comes through the cultural references that come through in their music. Anything goes but everything fits on Free Time, their debut album released last month. Textural fusions of psychedelia, pop, rock, post rock, prog rock, drone, country, jazz, trad, electro and Latin, Eastern, African and Indigenous influences abound, woven together into eight taut tracks that never outstay their welcome despite half of them, especially on the album’s second half being of sizeable length. Some have been critical of this, but in fact, its ends up being the overwhelming strength of the album. Appropriately, Free Time after all, is the album’s title.

The talented, imaginative and genre embracing foursome are Danes Andreas Pallisgaard (guitars, vocals), Jakob Falgren (guitars, keys, foot pedal bass), Jeppe Brix (guitars) and Jaleh Negari (drums). Emanating from Copenhagen a couple of years back and rising from the ashes of post rock eight piece La Fiasko, they now reside partly in Berlin, without doubt the most democratic, open and resultantly stimulating independent cultural hub in Europe. There is certainly a freedom inherent throughout Free Time, freedom to explore and experiment without fear nor favour.

It would make sense then that they would have a Japanese name that means pink noise, wouldn’t it, as opposed to say, the quite alienating term white noise. Far from being frivolous, the term pink noise actually fits their unique brand of musical creations perfectly, there’s warmth and a definite enjoyment that stems from them. The almost stream of conciousness writing style also suits that description and Pallisgard has said as much; “Most of what I write comes from picking up exciting words or phrases from wherever I stumble upon them. Or maybe it simply comes from floating around like some empty receptor, open to letting the language of the world flow through me.”

First off track ‘Time Is Like A Melody’, which also led off their debut EP from last year Peep sports an Animal Collective feel both in the vocals and the loops it employs. Guitar dominates together with a cleverly conjured up duality between a singular bass and drum combo which serves as the songs potent off-beat replete with flammed snare. The word melody in the title is also vocalised as part of that timing signature. ‘Myriad Pyramid’s gives off a Maghrib inspired beginning before launching into a joyous glockenspiel inspired rhythm that drives a wonderous piece of pop music. That joy also stems from the pyschedelic harmonies that serve as the track’s curious chorus.

The move into the next track is seamless and there’s more than a nod to the traditional roots of M. Ward to be found on ‘Cyborg Manifesto’ albeit with a upbeat, almost latin influenced country and western theme. Next is the hypnotic organ inspired ‘Everything Is Broken Or Stolen’ exquisitely paced by Negari’s percussion, which this time begins with bongos before nestling down with more conventional, in a western sense, use of drums. The track is rudely but appropriately interrupted by flicking through a radio dial before returning to where its began replete with vocals that coo and echo away the repeated line ‘come settle down’. It all ends in a cacophony of percussion and organ, looped guitar

Settling down is not in Pinkunoizu’s DNA though as lead single ‘Parabolic Delusions’ take Free Time off on another tangent. Almost a celebration from the start, it employs Japanese style pop and glorious harmonies with an undercarriage that seems borrowed from The Rivington’s 60s doo wop gig ‘Papa Oom Mow Mow’.

Their post rock roots can best be found on the albums standout among many and first track on the three track second half, ‘The Abyss’, which starts with a mixture of hope and foreboding. The underbelly is quite menacing but the noodling of the pleasant guitar reassures. You do really feel like to you are heading into what its title suggests. The delicate tapping of the ride cymbal drives things here and the guitars serve to give off that otherworldy feel that is ever-present. Distortion appears to great effect to bring the track home with a 60s style guitar solo.

Without doubt the most confounding and interesting track on the record is the nine minute epic, ‘Death Is Not A Lover’. Not once are you comfortable you can predict what’s coming next; plucky banjo at its start to its sitar inspired first third, multiple layered and wildly different vocals and samples that would have you freaking out if you were tripping. All the while, a beat mixture of African and sub-continental influences sits atop the commotion. Half way through, things definitively change. After the strange mantra of the spartan middle, the track opens out and ends with a western style rock structure as after all the searching and exploration Pallisgard is still exclaiming ‘I need an answer’.

The employment of world music influences continue on another lengthy number, the closing track ‘Somber Ground’. Buddhist style throat vocals start us off here as the song takes on a delicately thoughtful and quite pensive dimension. At about the four minute mark you can sense change is coming. The ensuing raucous like, yet backgrounded guitar and sax, big drum sound and dualling vocals complete our Free Time journey. The vocals in fact reprise the end lines in ‘Everything Is Broken Or Stolen’ in almost a defiant stand against any thought of this band ever settling down in a music sense.

It’s quite rare that a band can pull off a record that rests on the style of writing and experimentation employed by Pinkunoizu. To combine so many elements into a cohesive whole is never easy and often, when you have four ultra-talented musicians of this ilk, the narrative of a record can get lost in translation very easily. Free Time though thankfully pulls it off. Its genre defying nature is its undeniable strength and a mark of the intelligence of its creators. To understand freedom in any sense is an intensely personal thing. It means many different things to many different people. In a musical and artistic sense though, freedom able to be conveyed in some way so that it connects with others, no more so when you are in a band making music you want people to hear is a massive strength. Their democratic nature and mutual understanding in eachother’s art is how Pinkunoizu works as a collective and is centrally crucial to the success of this record. They are proud to shout it from the rooftops that all four of them had an equal say and ability to influence Free Time and its eclectically produced end product demonstrates this in spades.