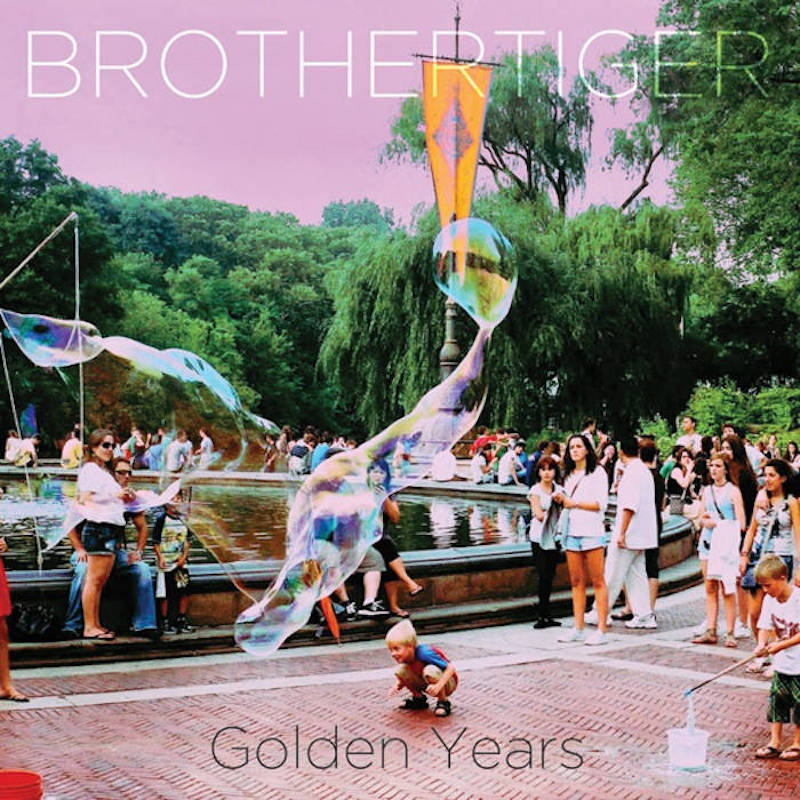 Brooklyn based John Jagos is Brothertiger, an artist who has pushed his way through a crowded genre to emerge with originality and confidence that many would be envious of. Hailing originally from Athens, Ohio, he first made a name for himself with the brilliant Vision Tunnels EP (which was a favourite here at Indie30) way back in May of 2010. Since then Jagos has been busy remixing the likes of Keep Shelly In Athens, Millionyoung, and Rollercoasters In The Woods, releasing plenty of singles, touring extensively and having regular DJ sets in European clubs. Here he had a chance to test his material on a captive audience, and this no doubt has played a part in the refined and finely honed sound found on Golden Years.

The intro to the opener ‘The Young Ones’ drifts in with muted sounds from what could be a playground, kids playing, joyful yelps and laughter with upbeat synths and percussion ushering in the album. Bright and sparkly, it is just a trailer for what Brothertiger has in store over the next forty minutes and ten songs. ‘I’ve Been Waiting’ is pop at its best, infectious as hell. We have entered the 80s from our comfortable position in 2012, where tracks like this, (and albums like this) shine bright in their homage to new-wave, disco and the cult of the keyboard. ‘Wind At My Back’ has the feel of an ocean breeze, vocals echoing, ebbing and flowing with a body-swaying vibe that is just joyful and positive in all regards.

‘Too Convinced to Care’ continues the lushness in a track that has several moments that build up and plateau onto fields of pure bliss. Multiple overlays of Jagos’ voice provide gorgeous harmonies that evoke a sense of calm and comfort, you can easily imagine it as a soundtrack to a long drive through the country at night, or a blue sky Sunday by a pool. It creates a warm and lazy envelope you just want to be a part of. ‘Reach It All’ takes things up a notch though it’s all still pretty mellow, lots of layers abound, looped vocal sounds sandwiched between lyrics and ever abundant synths and drum machined percussion, swirl and bounce in this track that brings to mind Animal Collective in places.

‘Golden Years’ is the title track, and has a New Order kind of feel going on at the intro, but as with the whole of the LP it never takes these borrowings too far. The sound is his and his alone, which is no mean feat in a time where ‘chillwave’ or ‘dream-pop’ seems to be the order of the day. ‘Lovers’ is a highlight standing out with its choppy structure and cut up vocals, definitely one for the dance floors. ‘Out Of Line’ is one of the smoothest tracks found on Golden Years, groove laden and full of disco goodness, this penultimate track is another standout and over all too soon clocking in at just under four minutes. Many of these tracks beg for remixing and will no doubt be available in the near future. ‘Turquoise, (Skyline)’ rounds the album off nicely in a hazy kind of way, bringing this atmospheric dream-scape to a close. Golden Years is a musical equivalent to a bean bag by a fireplace, and the talent Jagos displays in all aspects of composition, musicianship and songwriting bodes well for the future of Brothertiger.

The 80s were a time like no other. Back then, when the only digital things in our lives were our watches, we could only wish all the music sounded this good. The beauty of this revisit to the sound of the 80s through modern indie, is that it is filtered through years of retrospect and only the good stuff is allowed through. It leaves the shit, and we all know there were mountains of shit, to stay forever where it belongs, to be played in bad night clubs that go by the name of ‘Time Warp’, or ‘Greed’ or some such thing. Oh Mickey…if only Jessie’s Girl had heard of Brothertiger, things could have turned out a whole lot differently for her. I’m not sure what that means, but many of the fans that Jagos has accrued over the last couple of years would have been in nappies at the time anyway so it doesn’t matter. And those of us who do remember it, know it’s a good thing to hear the brilliant and pioneering sounds of the good 80s, re-birthed into albums like this.