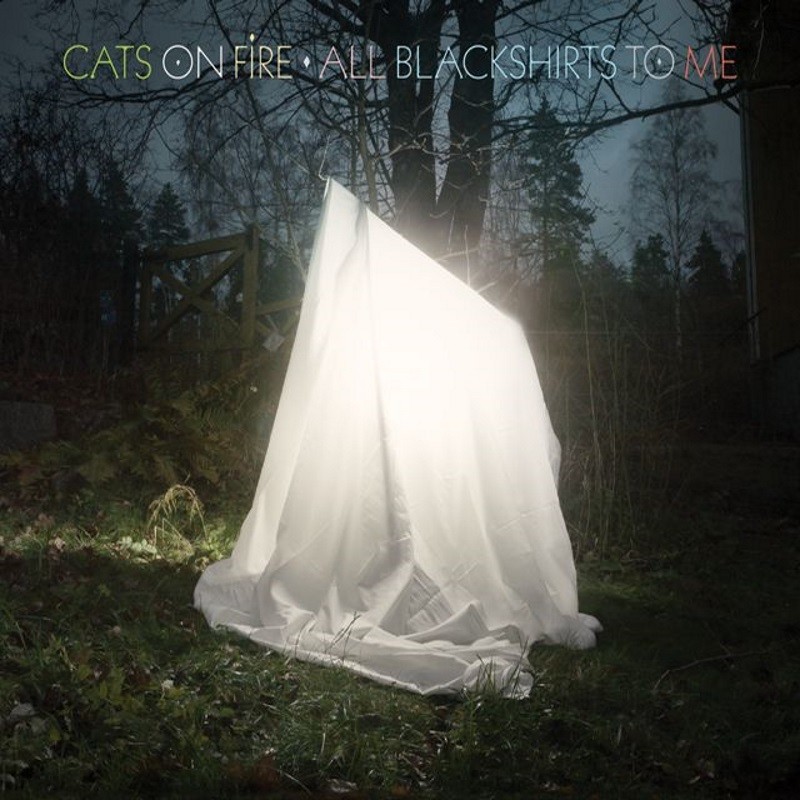 It’s been a long and frustrating road travelled for main Cats On Fire protagonist Mattias Björkas and company. The now five piece pop troubadors had their beginnings in the then somewhat small and isolated west coast Finnish town of Vaasa where in late 2002/early 2003 as an 18 year old Swedish speaking Björkas, Kenneth Höglund and initial members Kim and Johan  put out a couple of demos and a debut EP, Solid Work, on vinyl to heartening reception in the Finnish big smoke, Helsinki. However, like many good starts, the initial buzz turned out to be a false dawn and despite moving to Turku, gaining Ville Hopponen and Henry Ojala (now the mastermind behind Burning Hearts) and despite releasing two more EPs over the next three years, the Cats On Fire project failed to make the right connections and stalled.

Slowly though, a collective around Björkas began to take shape. Finally in a position where they could get people taking notice they were rejuvenated in the summer of 2006 and released their first album proper, The Province Complains, to deserved acclaim among the indie pop community throughout Europe. Two years later, they released the equally impressive Our Temperance Movement. Two prominent shows at NYC’s 2008 and 2009 Popfest, alongside Ojala’s Burning Hearts and Sweden’s The Radio Dept. and it seemed things were starting to fall into place.

The last three years then seem to have seen the band tread water again and you only need to do a quick English language search of the band on the web to understand that Cats On Fire, for some bizarre reason, haven’t exactly set the English language world on fire over their long journey. It is hoped then that their new record All Blackshirts To Me will change all that.

Once again incorporating traditional melodies with sparkling jangly pop that spans the ages, All Blackshirts To Me builds on the work done on previous releases but overall is more exploratory and diverse both in approach and sound. Still prevalent though is the intellectually and politically piercing lyrical content that has always characterised Cats On Fire, no better illustrated than on ‘1914 and Beyond’, a track that contains pointed criticism for the European elites financial penchant for imposing austerity in the wake of the 2008 GFC, policies that serve to insulate and reward them from their fuck-ups while they fuck over ordinary people, policies so widely rejected by popular forces in both Greece and France in recent days. Bjorkas advises, “Greece don’t pay your debts, don’t bother with debts, Iceland, go on and cover us in ashes”. Also present again are doses of withering self-criticism, clever self-deprecation and more than a flirtation with obtuse laden reality, lyrical qualities that Björkas has come to be renowned for.

Throughout the album’s eleven tracks, there’s almost an encylopedic sense to Björkas’s pop knowledge. While his vocals have always had a little Edwyn Collins about them, that’s about where the similarities with bands like Orange Juice and other c1980 British bands end. Opener ‘Our Old Centre Back’, an example of Björkas’s prediliction for playing the part of the one that loses out begins with a traditional flavour and combines old folk vocal stylings with laconic six string work. It also sets the tone of the record, that is Cats On Fire seem determined to deliberately play within themselves; the sum of its parts making up the whole.

‘My Sense Of Pride’ is a joyous listen with chiming guitars but lyrically is an example of the self deprecation aforementioned, “Takes courage to say I’ve been mistaken, I’ve been an idiot for years, Now I speak in a lower voice to blend in, I try not to dress up queer”. ‘A Different Light’ is an absolute pop gem that begins with a soaring hook before settling down in a disciplined fashion before rising to flourishing finish.’There Goes The Alarm’ is a sparkly ballad that hums away beautifully as intricate guitar arrangements dominate both in idea and execution throughout. Bjorkas completes the delicate nature of the track by vocally almost nursing his lyrics through. ‘After The Fact’ bounces along with angular bass prominent with gorgeous harmonies surrounding its chorus.

‘The Sea Within’ continues the  trajectory and follows a traditional bent vocally and the melancholic, yet defiant European history lesson, the aforementioned, ‘1914 and Beyond’, completes the middle section. ‘Well Well What Do You Know’ features Bjorkas and Iiris Viljanen, not for the first time delivering exquisite harmonies together in another irresistable traditional arrangement.

‘Smash It To Pieces’ evokes a mixture of a little bit of Belle And Sebastian at times together with good British and Irish nineteenth century folk. Standout track, ‘A Few Empty Waves’ is a sweeping statement of intent in terms of what All Blackshirts To Me is about – a band determined to keep relevant and vital. The track contains much power in its own restraint musically as Bjorkas uses the pitfalls of being at sea as a metaphor for the mixed experiences of Cats On Fire thus far. Closing track, the instrumental accordion dominated ‘Finnish Lace’ could almost be seen as a muted musical celebration, the culmination of a great record by artists that are satisfied but fully aware that music is but just one part of life.

Throughout All Blackshirts To Me, Cats On Fire never overplay their hand. Each track stays firmly within itself, allowing the listener to come to each of them on his or her own terms. This has been something that the band have been known for throughout their career and perhaps one of the reasons they haven’t ‘cracked’ the English language independent music world. One hopes this record will change that and early signs are that it will. The most pleasing thing out of that is the fact this very special pop band have always marched to the beat of their own drum. That they are producing their best work after eleven long years is testament to the band’s timeless ability to add social and political intelligence as well as musical virtuosity to the full spectrum that pop has to offer. It may have been a long and hard road travelled over the past decade for Cats On Fire, but I for one hope that All Blackshirts To Me simply stands at the centre of another decade to come.