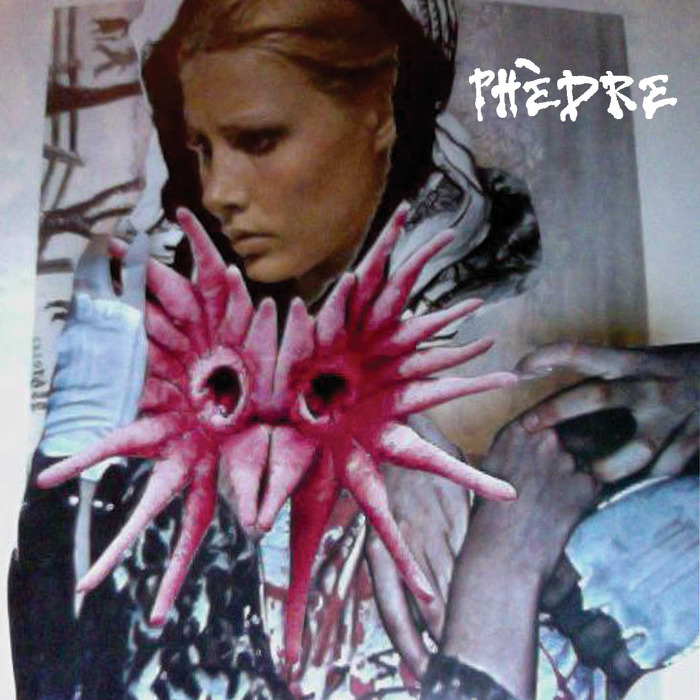 Trying to access experimental music can sometimes be very alienating experience, stemming as it does from the deep recesses of individual creativity. It can run the risk of being a self-indulgent stand offish affair where the distance created between artist and listener is difficult to breach. But at the end of the day, creating experimental music should be a very personal pursuit. Filtering, interpreting, pulling part and putting back together existing influences can only be this way. But when the experimentalism present is covertly accessible for one who possesses a modicum of intelligence, it can be a unifying, uplifting and educative experience. So it is with Canadian trio Phèdre, two thirds the scuffed up retro pop/rock of Hooded Fang members Daniel Lee and April Aliermo and one third, the wild unpredictable electronic music of Airick Woodhead (Doldrums)

The result of this coming together is an ultra-impressive self titled debut record that is nothing short of a triumph. That Phèdre manage to combine a vast array of disparate influences and fashion them into seamless balls of experimental pop at its finest is testament to their songwriting chops and unique imaginations. The album employs a myriad of rock and pop hooks with driving synth, weirded out samples, Lee’s sexually charged croon and Aliermo’s effectively dispassionate vocal accompaniments. Try as they might to apply tongue in cheek sabotage to the mix by employing deliberate lags to the execution, the trio cannot undermine a record that sports at least six class pieces of vital electronic pop.

‘Aphrodite’ begins with a lounge inspired opening before launching into a synth bass intro that its the precursor to a collective of wailing banshees and a digitally inspired catchy beat signature. The track then settles down and rests on a killer harmony and a standout built up chorus. As its title suggests, its a strange lament of sorts for the ancient goddess of love and beauty. The strange mood that surrounds the track is in keeping with an ode for a goddess that was apparently born from the cutting off of Uranus’ genitals and throwing them into the sea.

‘Cold Sunday’ is an example when off kilter driving electronica is combined with the best elements of hip hop. Hip hop is a genre that often out hypes itself and overplays its hand. The contribution from Toronto hip hop artist Rober Bolton, aka Arowbe is perfectly suited to Phèdre’s aesthetics, laid back and always appropriate and complements Lee’s warbled deadpan vocal.

‘Ode To The Swinger’ sounds like Lee has enlisted the fog horn of a merchant navy ship to accompany his duelling vocals with Aliermo while ‘In Decay’ is pure fun, if you can get that out of a song about multiple murders; a mixture of starry pop with an 80s inspired dance beat. Again the complementary nature of Lee’s and Aliermo’s vocals standout here.

‘Dreams’ positively canters along with its slow jamming beat, with Lee’s nasally vocals and celebratory harmonies in the background of its chorus. The twisted ‘Love Ablaze’, like ‘Ode To The Singer’ takes us back a few decades and brings to mind the less than shiny work of Dirty Beaches. Album closer, ‘Glitter On Her Face’ finishes things off nicely with optimistic synth and a just plain weird vocal contribution from all three band members.

This album has been criticised in some quarters for being featureless and lazy. I for one cannot countenance this for one minute. Repeated listens reveal some incredibly strong ideas flowing throughout the record, ideas that push the boundaries of possibility and sensibility, all the while doing so through a lens of light-heartedness. With all its quirky electronic flourishes and restless arrangements, at times sense is stretched lyrically too which is represented in the wildly flamboyant vocal delivery. All of this suggests that Phèdre aren’t taking themselves too seriously and far from being a factor that weakens the album, it’s this approach that makes it so vital, so relevant and so now.

From the album, ‘Phèdre’, Daps Records.