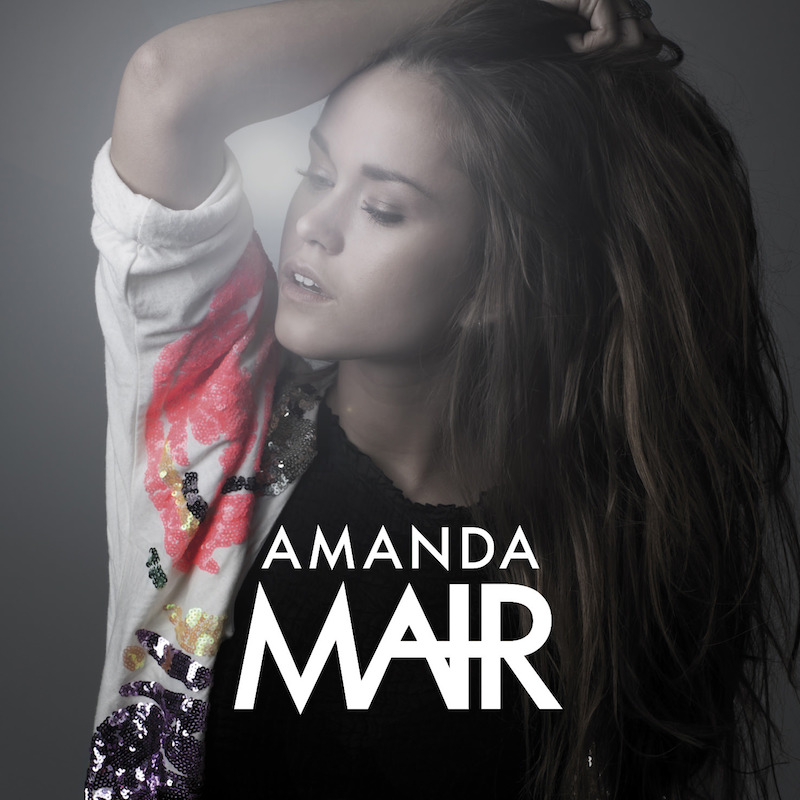 It would be easy to see Amanda Mair as a mere musical product. After all she came of age and turned 18 just this week, is easy on the eye, doesn’t yet write her own songs and appeared last year out of nowhere with two pieces of pop bliss in the pure Swedish tradition; sweet vocals and a big, almost cavernous and emotionally driven rhythm section replete with elements of orchestral drama. However, while Mair might have some indie luminaries in her musical corner, namely Labrador founder and Acid House Kings, Pallers and Club 8 member Johan Angergård, songwriter and collaborator Roger Gunnarsson and producer Philip Ekström, its quite clear that she is far from a muse in their company. Indeed, you get the feeling that while the Angergård and Gunnarsson compositions and the Ekström embellishments are central to the record in many ways, without Mair these songs may never have seen the light of day. That notwithstanding, anyone doubting the bona fides of the protagonist or the results need to remember that Labrador Records is not into smoke and mirrors and major label trickery. As its consistently honest output demonstrates, Angergård is into putting out pop music that’s full of sincerety.

Mair herself, in addition to her beautifully fragile voice, plays her favoured instruments, piano and keyboard with panache but can also take her hand to bass, guitar and drums, the latter was done while playing Hellacopters covers in a band at school. Hardly the curriculum vitae of somebody that would simply wait around and open her pipes in certain ways when told to. In fact, she was presented with a number of songs to choose from herself and ended up taking the ones that most suited her musical approach. She then added her own unmistakable vocals and playing style, so much so, you get the feeling that she now owns them. And even a cursory listen to her vocal artistry suggests that she is miles apart from those who are cynically and artificially produced automatons.

Those aforementioned two singles, the big beat driven, yet restrained pop genius of the lyrically pensive and debilitating ‘Doubt’ and the emotive Mary Onettes sounding orchestral fragility of ‘House’ finally led to a full length self titled long player. While these songs and third single, the jaunty, upliftingly innocent and ultimately danceable ‘Sense’ are undoubtedly standouts on the album, there’s certainly other highlights to be unashamedly devoured.

The sparkling, lush and full bodied opening track ‘Said And Done’ with its powerful drums, cascading keys and an almost middle eastern string section puts the self titled albums first four tracks (‘Doubt’, ‘House’ and ‘Sense’ follow) up there with the best start from a pop record for long a day. There’s not a mis-step or wasted moment. It’s almost as if the tracklist order was done to hopelessly hook you in for the somewhat more musically restrained tracks that follow. Indeed, the first half of the record ends with a gorgeous Pelle Carlberg penned ballad, ‘Skinnarviksberget’*, which allows her unique voice to flourish in less upbeat circumstances.

The second half begins with ‘Before’, a retro sounding track with a verse full of room to move and a wonderously optimistic chorus which is followed by the immediacy of ‘It’s Gonna Be Long’ which contains an infectious off beat and another rapturous like chorus. ‘What Do You Want’ sports an almost balaeric feel as it dives headlong into a musical tropical paradise that belies the frustration of the lyrics. ‘You’ve Been Here Before’, another ballad, takes us back a notch, and like ‘Skinnarviksberget*’, again allows time for us to contemplate Mair’s delicately natural vocals. The album is completed with ‘Leaving Early’, a title that is telling because, like all good pop albums, things are over before you know it.

Amanda Mair the album is a delightful trip through the best that Swedish pop has to offer, high praise indeed. When you assemble Angergård, Gunnarsson, Ekström and Carlsberg et. al. together you’re always going to get something special and it continues to amaze how they manage to make their arrangements so dense and yet provide space within them that’s almost palacious. But undoubtedly what gives this album its unique character is Amanda Mair herself. You get the feeling that without her, these songs would still be great songs, but they are made even greater for her presence. Her vocal mark is indelibly stamped all over them just as her collaborators would have intended. And that’s the great thing about the Swedish indie pop disposition, it always gives far more than it takes. While they gifted Mair the songs, she gifted them exactly what they would have hoped for in return. As for Mair herself, what lies ahead of her may be undoubtedly as immense as her talent and the direction that she will take is anyones guess. It is hoped though that she can keep those soul destroying major label predators at bay. For now though lets just appreciate and celebrate what we’ve got, and that’s a superb album of pure pop pleasure from an already very talented artist.

*a party hill overlooking the city of Stockholm from the adjacent southern suburb, the island of Sodermalm.

From the album, ‘Amanda Mair’, Labrador.

From the album, ‘Amanda Mair’, Labrador.