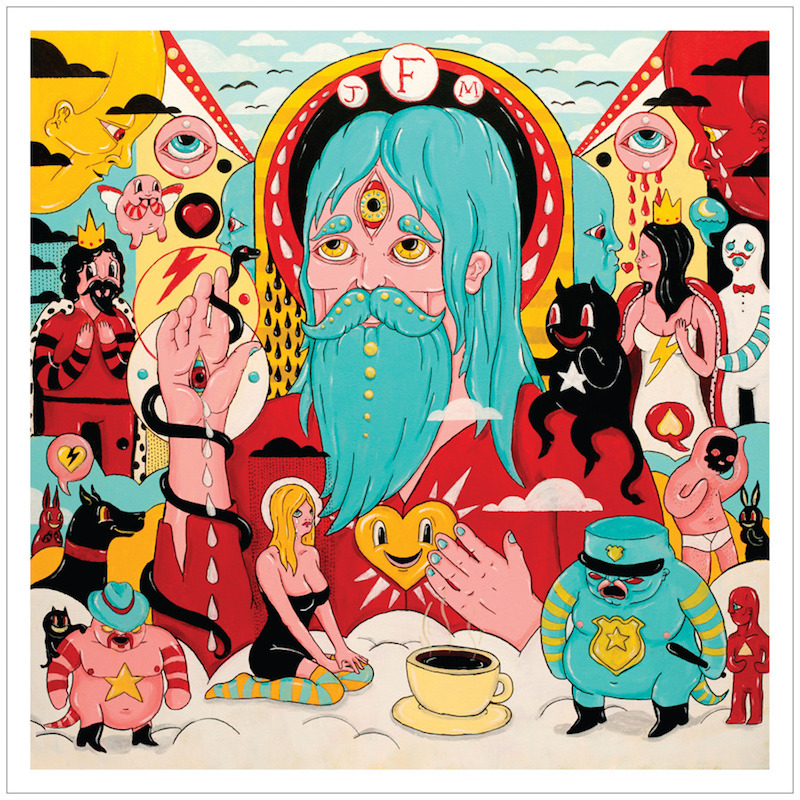 “It’s all of me and none of me” is how Joshua Tillman has described his relationship with Father John Misty, a new incarnation and a step in a different direction for this talented and quirky singer-songwriter. The sombre and melancholic atmosphere of his previous work has given way to a warm, rich, bold and at times darkly humorous tone present across the twelve tracks found on Fear Fun. He has said that prior to writing the album he “got into his van with enough mushrooms to choke a horse and started driving down the coast with nowhere to go. After a few weeks I was writing a novel which is where I finally found my narrative voice….it was a while before that voice starting manifesting in a musical way, but once I settled into a Laurel Canyon spider shack, where I’m living now, I spent months demoing all these weird-ass songs about weird-ass experiences, almost in real time, and kind of had this musical ‘Oh there I am’ moment, identical to how I felt when I was writing the book.”

This move to California, and in particular Laurel Canyon, has given Tillman a new context both in climate and history. This LA neighbourhood has been home to the likes of Frank Zappa, Jim Morrison, Joni Mitchell, and members of the Byrds and Love. A crossroads of counter-culture that still retains a bohemian atmosphere, it serves as the antithesis to the lush homes of Beverly Hills, a ten minute drive away. The surrealism of LA shines through on Fear Fun and sees Tillman brimming with confidence and strangeness. It’s an ode to this city of equal measure dream and nightmare, where lives are fake, fickle and all too often crushed in search of something that was never really there. All is this is encapsulated over the forty-three minute debut of Tillman’s Father John Misty incarnation.

‘Funtimes In Babylon’ opens proceedings, with a simple structure highlighting the vocals “Look out Hollywood here I come / fun times in Babylon / mama they’ve just begun / before they put me to work in a government camp / before they do my face up like a corpse and say get up and dance / before the beast comes looking for last years’ rent”. ‘Nancy From Now On’ is a hypnotically infectious song, that is immediate and will go down as an indie classic. It actually sounds like it has been around as a classic for ages, with a sound that is timeless, but not in a way that is a rip off of anything. This is including his own work as J. Tilman (of which he has seven LP’s) or Fleet Foxes (of which he was drummer from 2008 until recently), this track and the album as a whole, has an at times morbid playfulness about it, but hits the mark straddling the line between folk and indie pop bringing out the best of both genres.

‘Hollywood Forever Cemetery Sings’ was the first single and another highlight of Fear Fun, a track that is full of driving percussion and full throated vocals, brimming of reverb and the sound of Americana. The video is epic featuring actress Aubrey Plaza wondering about a surreal landscape of a drugged out party and forest, it’s another immediately likable track you’ll want to keep hearing all week. ‘I’m Writing A Novel’ tells a narrative of the seedy life of West Hollywood, as he croons “I ran down the road / pants down to my knees, screaming / ‘please come help me’ / that Canadian shaman gave a little too much to me!”. ‘O I Long to Feel your Arms Around Me’, ‘Misty’s Nightmares 1 & 2’, and ‘Only son Of The Ladiesman’ each have their own identity but stand strong in their own right, and are each a cohesive part of the whole. The track placement works perfectly throughout.

The LP closes with ‘Everyman Needs A Companion’, which came from Tillman’s solo west coast journey from Seattle to LA, a trip over several months from which the persona of Father John Misty was born…”Joseph Campbell and the Rolling Stones / couldn’t give me a myth / so I had to write my own”. This release seems to have been a liberating experience for Tilman, and it comes across in the sound and warmth of Fear Fun. The mysteries of a haunted urban landscape prevail, and as FJM there is an outlet for this terrain to explored through the eyes of an outsider, and sung with the lyrics and voice of a poet.

Nancy From Now On

The Only Son Of A Ladiesman