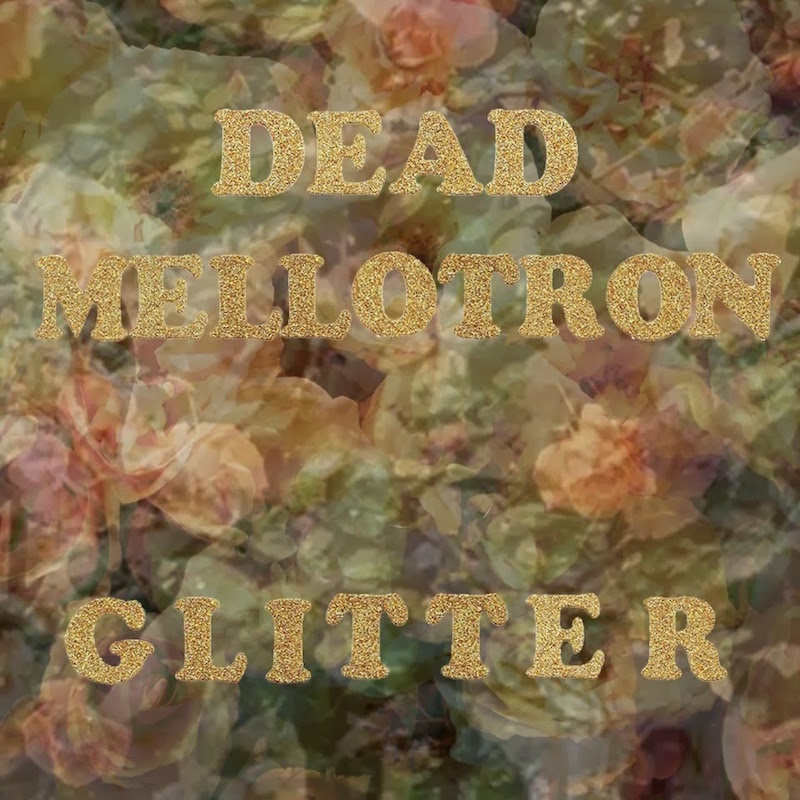 Dead Mellotron began in 2007 as the solo project of Louisiana native Josh Frazier and its first incarnation came in the form of the heavy and atmospheric digital only release Ghost Light Constellation. That title is telling as there has always been something otherworldly about Frazier’s approach. Between that release and the next, Frazier moved to the independent music bastion of Baltimore and enlisted Aimee Bowen and Courtney Corcoran to his cause. In 2010, a Beach House cover, ‘Saltwater’ ensued as did a self titled second LP.  That nod to the Baltimore duo is telling as there is definitely has been a trajectory toward a more pop oriented sound, albeit a dense dreamy one, on both the self titled album and the perfectly named Glitter, the band’s third record and the subject of this review. Rather than worry too much though about wordy contextual fare in tracing the background to understanding Glitter, you can grab both Ghost Light Constellation and Dead Mellotron for just three bucks each here.

What sets Dead Mellotron apart from likely and somewhat lazy comparisons to My Bloody Valentine, Jesus and Mary Chain and Ride is their tendency to use bass guitar to great effect. The shoegaze scene of the late 80s and early 90s contained quite a penchant for centreing itself in the treble zone, putting reverb drenched guitar front and centre. This trio however, prefer a fuller, more rounder sound and thus employ a powerful sonic carriage which is placed underneath to complement Frazier’s free, yet disciplined melodies and effects. Taken together on Glitter, the stream of conciousness writing process yields a delicate, yet alternatively blistering blend of introspection and outward displays of raw power. Each song melds effortlessly into the next to the point of, if your not careful, the all too brief sonic experience will be over before you know it.

Many have commented on the puzzling brevity of Glitter, clocking in as it does at just 26 minutes spanning seven tracks. However, what needs to be understood is that the songwriting process, just like any creative endeavour takes painstaking time. Frazier had particular difficulty in this area after writing the self titled second record. In fact, in a back and forth email exchange and a five month silence with his now London based label Sonic Cathedral, Frazier actually scrapped the entire first write and started again. What he sent as a result was again re-written and re-recorded in the form of seven tracks bound together into a single mp3. That in itself gives a strong insight into the nature of Glitter. Indeed, it can be taken as one long track as each of the tracks wind in and out of each other and unless you are sitting there looking at the track display on your stereo you’ll struggle to pick where one song ends and another begins.

While it may be futile to stick to my tried and tested run down of describing an album’s tracks in order, I’m going to give it a whirl anyway. Glitter begins with the memorable ‘Stranger’, which more than adequately sets the scene for what’s to follow. A delicate guitar melody is combined with a swooning vocal harmony before the track launches into a driving four to the floor bass driven approach as that harmony develops into gorgeous, yet indecipherable vocals that almost form a fourth instrument, a pattern that is present throughout. A starry like ending segues perfectly into ‘Can’t See’ which begins with a familiar beat and an effective yet understated bass line while the guitar noodles away alongside as Frazier’s vocals agonise away. Then the vocalless chorus joyously chimes in as Frazier’s guitar hook cascades away. ‘Bye’ is a gorgeous piece of introspection as dirge like effects loop and swirl until the rhythm section comes in and in combination leaves a soaring impression. The piano and keyboard laced ending provides the springboard for the snare shot beginning that ushers in ‘Making Up’, the albums most accessible track. Its a work of exquisite beauty and positively floats along sporting dispassionate vocals, a disciplined beat, hypnotic guitar and a bass hook to die for. The song then explodes into a celestial celebration of sound replete with ride cymbal (great to see it back and put to great use here) to complete that unearthly feel.

The all too brief second side runs virtually like a ten minute track in three parts. ‘Babe’ begins proceedings with exceeding care before launching into a joyous sonic explosion where big drums and squalling reverb complement each other perfectly. The sat back harmonies return on ‘Ooahhh’, a sound just as its title suggests it should as Frazier repeats a familiar hypnotic guitar lick. That almost exact same guitar lick dominates ‘Dying’ which is layered with an almost industrial sound sitting alongside tremblo pulling at the tracks centre.

Why do I feel that the previous two paragraphs are woefully inadequate as descriptors of Glitter’s contents? It’s because Dead Mellotron are wonderful exponents of creating something that is tangibly undefinable. You know its there because you can hear it, but is it really? I’m no physicist, but I do know innately that the concept of time can mean different things in different contexts. If it was Frazier’s intent to make this album sound timeless in the sense of the here and now, he has succeeded. But you get the feeling, that even after all the painstaking effort expended to create this record, Frazier just doesn’t work that way. What comes to his mind in this process is seemingly just that. No invented frills and no preconceived gimmicks; just the generating of a journey filled with pure blissed out enjoyment. And during your journey, you’ll inevitably get lost, figuratively and literally, but in the end you won’t have a care in the world as to where you are are or where you’ve been nor whether you find you way home or not. For a songwriter, to achieve that gift for your listener is pure music gold; and all that glitters is gold herein.

From the album, ‘Glitter’, Sonic Cathedral.

From the album, ‘Glitter’, Sonic Cathedral.