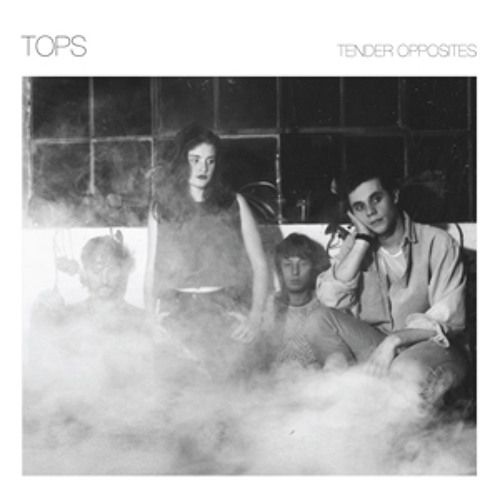 The last decade or so has seen the onset of a cerebral and nostalgic form of pop music largely thanks to the left field single minded work of outsider luminaries like Ariel Pink, John Maus, Matt Fishbeck, Geneva Jacuzzi, Gary War etc. It has produced an array of bands and artists that have taken up that torch and have moulded that off centre creativity into a discernable lo-fi, yet musically intricate and challenging take on 70s and 80s pop music. Twin Sister and Puro Instinct instantly come to mind. The fact they’re on tour with Maus at present (one hell of a show!) illustrates the point. It’s important to note though that Pink and Maus still undoubtedly lead the pack are are simulateneously providing that intangible feel that drives this particularly unique blend of pop.

Another band to have joined the ranks is TOPS, a coming together of some of Montreal’s finest purveyors and players of independent DIY pop music. The quartet has sprung from local bands of the ilk of Silly Kissers, Paula, Sugar Boys and Pat Jordache. Their debut album, Tender Opposites, more than lends itself to the growing list of works that just don’t celebrate and respect the work of the past, but add lustre and a fresh take to those sounds.  Anybody who thinks TOPS are simply aping the past do not recognise subtlety and/or are just not listening.

One of the impressive things about the TOPS approach is their determination to avoid bells and whistles. Tender Opposites is a warm and rich listen but at the same time it’s spartan in the sense that it employs nothing else but the traditional – guitar, bass, keys and drums. And these guys, David Carriere, Thom Gillies, Jane Penny and Riley Fleck respectively are all over them, constructing astute melodies and sharp rhythms that are immediately infectious and enduring. Besides the creativity on the music side, Penny’s vocals make Tender Opposites an even more intriguing album. She’s just as much at home in the lounge bar of a jazz club as she is playing to a pop crowd. She can be sweet and innocent, sultry and powerful, distant and detached, urgent and immediate. No mean feat. Yet, there’s also a fragility attached to her voice as well as the music. For all the assuredness in each track, you get the feeling there’s a restlessness apparent in the songwriting at times and a wariness of undeserved contentedness.

Tender Opposites, vinyl wise, sits nicely at four tracks per side and kicks off with ‘Evening’ with its ethereal keys, canoodling guitar and metronomic beat. ‘Diamond Look’ is an ever-immersing number as it oscillates between a laid back and urgent feel. But its lyrics belie its sparkly appearance. It’s an ascerbic and cautionary tale and a non-gender take on the blankness of mainstream, consumer dominated, plastic relationships. “VII Babies” is another track that contains two distinct parts; a smooth verse is rudely but gloriously punctured with flute, an elastic bass line and an urgent latin inspired off-beat. When the percussion kicks in, bridge and outro alike; the song becomes almost the most appropriate track for the promulgation of a conga line ever! The final track on side one, the lengthy ‘Double Vision’ is more introverted musically and heartfelt vocally, taking the album out of the club and into the lounge.

Side two opens with ‘Go Away’, a track that is dominated by its strong bass lines and Penny’s chorus call to anyone who’ll listen. First single ‘Turn Your Love Around’ saunters along with a funk like disposition where all instrumentation is in synchroncity including the vocal arrangements. The keys and guitars sparkle over the disciplined yet spirited rhythm. The song then turns on its head as the bass, guitar and vocals get busy but the drums stay in a slow groove – absolute gold. The introspection returns on the chilled out and otherworldly ‘Rings Of Saturn’. Vocal harmonies are used to great effect but the most impressive thing about the track is how it utilises space and tone allowing all elements to breathe and illuminate the other. The album is completed by ‘Theme’, an instrumental that collects the essence of the aforementioned seven tracks in the way that suggests a multi-faceted reprise was in
order.

The most impressive thing about Tender Opposites is its clear exhibition of the quartet’s songwriting chops within a familiar generic paradigm. It’s simply lazy to label TOPS derivative or unoriginal. To do so completely ignores how independent pop music developed historically and organically. Artists have always worn their influences on their sleeves, whether they are going out of their way to embrace or eschew them. Repeated listens of Tender Opposites will reveal a band that clearly revels in its songcraft and takes familiar sounds down an individual path, not only blending but disturbing conventional pop aethestics.