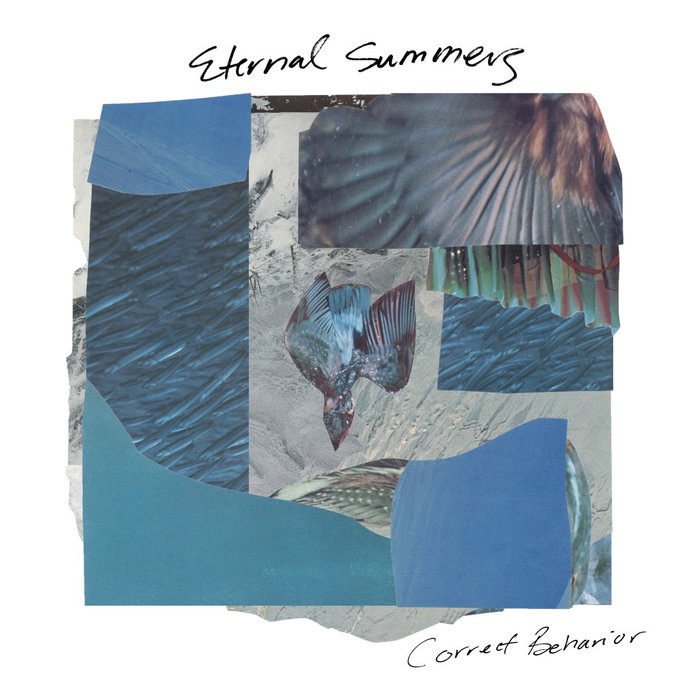 Since their inception in 2008 Virginia indie post pop/punk trio Eternal Summers have been railing constantly against the stifling straightjacket of authority, and no, they’re not talking about the exactly the same kind of authority that has led to the shameful treatment of Pussy Riot in Russia. That’s more overt and in your face, although just try protesting in the western world right now… Outwardly demonstrable dictatorships are plain to see and don’t hide their aim in crushing both the individual and collective spirit. The elites that run more clever versions though, like the democratic fallacies in the ‘West’ largely destroyed the collective spirit decades ago and through their control of the mass media have been trying to ‘kettle’ all individual expression that doesn’t fit in with making money for them ever since.

While Band founders Nicole Yun and Daniel Cundiff have never been overtly intellectual in their social or personal criticisms, they quite clearly are on a different path to where the powers that be want them be. They belong to a musical collective, the Magic Twig Community in Roanoke, a community that supports each other and shares instruments among other things. Reading the simple, repetitive lyrics on their aptly titled new album Correct Behavior and you get the impression that the authority they elude to is more about that which people put upon themselves. However, extrapolating this outward is easy in the current environment. People don’t limit themselves in a bubble. The insidious, almost subliminal in kind, narrow corporate dominated cultural authority that envelops society without most in it even knowing, a world where financial elites act with impunity and the poor suffer is the social and political backdrop to Eternal Summers’ career. There is strength in numbers then.

Sound wise, Correct Behavior is a breakout album for now trio, having added Jonathan Woods on bass. While the lo-fi DIY sound and anti-authoritarian streak of past releases, the full length collection of singles, Silver, with its opening track ‘Disciplinarian’ and last years EP Prisoner, with its song titles like ‘Cog’ is still bubbling beneath the surface, this is a more lush and expansive, better recorded album softens the edges but not the centre, which is as visceral as ever. And while that may be a bad thing for some people, Eternal Summers lose nothing from going in that direction. In fact, the improved virtuosity on show here only renders things more powerful.

Opening track ‘Millions’, the best on the album, is a perfect example of this. Lyrically sparse at just  five lines, it speaks volumes in its brevity with its understanding of the need to break free. Musically, it positively sparkles with Yun’s delay driven guitar work and exquisite differentiated vocals as well as Cundiff’s big yet disciplined drum work. Immediately, you can feel the benefits of the addition of Woods’s bass work.

Other standout’s include, ‘Wonder’, which invokes the alienated feeling of standing out (or in) from the crowd in your youth. ‘You Kill’ begins with a tortured high note driven riff before settlin down and delivering a pop based vibe. The sassy sounding, yet lyrically sad Cundiff sung ‘Girls In The City’ with its menacing, nihilistic guitar and punk derived bass and drum approach is a welcome change up and perfect start to side two. ‘Heaven And Hell’ within the context of the whole album is almost brutish at its beginning before Yun’s vocals sweetly intervene. The opposites definitely attract here.

With Correct Behavior, Eternal Summers, along with PS I Love You, DIIV and others have taken the mixture or pop and rock to another level again. That’s not to say what they are doing is groundbreaking or necessarily vital, for their influences are plain to see. Name dropping Metallica, Black Sabbath with The Cure and Radio Dept. in their credits without wincing once is where today is at musically. The many independent minds of Generation Y and indeed the intersection of Gen X don’t really care for clear delineations when it comes to genres and Eternal Summers with their aforementioned distaste for putting individuals in boxes in a lyrical sense clearly mirror that attitude musically. And because of it, they take us on an unashamedly enjoyable ride.

From the album, ‘Correct Behavior’, Kanine.

From the album, Correct Behavior’, Kanine.