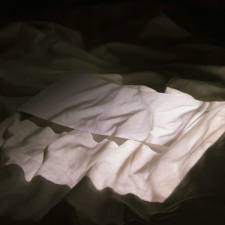 RECORD REVIEW: HOLY OTHER – HELD
As evidenced through his musical approach and his on-stage non-persona, Mancunian based electronic producer Holy Other has always been focused on creating mood and atmosphere for others rather than identifying or representing specifics of himself. Oscillating quite deliberately between laconic and tension filled elements in his music and employing non-lyrical approaches to vocals, his at once spatial yet sometimes claustrophobic sound realised through the meticulous cutting and splicing of house, minimal techno and R&B genres renders his end product very much an art that is definitively open to interpretation as well as being modern, vital and present. The standout debut EP With U from last year kicked off the shadowy producer’s musical career nicely and debut long player, Held, builds greatly on this base.

The insular approach that produced With U in the ‘bedroom’ was replicated with Held. Indeed, such an approach can be seen as absolutely essential to producing the uniquely emotive atmosphere created in each track. In fact, it’s his shyness and self-deprecating nature that has produced the anonymity and the difficult subject of this record – relationships. The distance the producer put between himself and the outside world is represented by the record’s intensely personal nature. Speaking to Stereogum back in August;

“I just tried to… close myself off to any critical world as well. I just tried to make what I wanted to make, ignoring other factors, which was pretty difficult. And I wasn’t going out, so it was kind of in a closed, solitary experience — quite a miserable one — which I’m not sure if you picked up from the record. It’s less optimistic than the last one”.

One of the key differences between Held and With U is that Held represents a whole whereas With U was really simply a loose collection of ideas represented in diverse tracks. There is a definitive theme that pervades the record of the difficulty of establishing and maintaining close and meaningful relationships in a contradictory world of overt individualism and crushing conformity. And Holy Other does not seek to inform but to celebrate that individualism by creating the space for the listener to interpret each track in any way they like. One could pick out moments of hope and optimism in places; but at the same time interpret them in the most morose and downcast of ways.

Musically, Held employs uncertainty and confliction to great effect. The slow quickening of the off beat and the opposite tones in the vocal that dominates opening track, ‘(W)here’, seems to reflect that title – wanting to keep someone close, but not quite sure how to intellectualise that and reconcile it with the thirst for eternal space and individual identity and the fear of having that subsumed. On ‘Tense Past’, the tortured female vocal sample turns itself inside out and forms into an almost tortured plea for understanding. It could be interpreted as a somewhat immature cry for help in a metaphorical sense or a knowing demand for closeness or space. ‘Inpouring’ is probably the best example of Holy Other’s musical growth since With U. His use of female and male vocal samples almost mirror each other but seem poles apart in terms of what’s behind their anguished cry. The restless beat sets Held apart from the more seamless approach of the past. ‘Love Some1’ holds its pattern before a slow contemplative beat combines with percussive elements that seem to represent confusion. The low tones can be seen to further represent the anguish associated with the emotionally tense and gut wrenching wrestle with trying to rationalise something as irrational as love. ‘U Now’ comes closest to actually representing words but thankfully, they are never fully expressed almost reflecting hopes and dreams falsely prescribed and bought but never realised.

The title ‘In Difference’ is deliberately two words instead of one. Holy Other isn’t indifferent to the idea of love, he just isn’t sure how or if it can play itself out in a modern sense, if it ever could in the stifling days of male dominated cultural norms. The jarring vocal duet also represents this. ‘Past Tension’ seems to be a call and response of sorts at its beginning and unfolds to almost offer glimpses of clarity, almost like rays of sunshine peeking out of the gloom. The standout title track is another reflection of the aforementioned musical growth since With U. It again highlight’s the producer’s intelligent use of male and female vocal samples, while seeming to feed off each other in complementary ways, they rather admonish the other with their alternate whispers sitting underneath serving as some sort of cautionary tale. It employs an omnibus like turn half way through in what seems to take an age for the track to change from the emotive almost foreboding nature of its first half into the either a relaxed or contented or thankful and relieved finish. Final track ‘Nothing Here’ suggests no happy ending. It seems to exude the cautionary tale that unless both are fully cognisant and confident (but not overly so in the latter sense) in the meaning of self and space, after a time, all relationships inevitably sour. Whether that serves as the end of them or they morph into a difficult cacophony of compromised compromises, subjugating and subordinating individual growth to some kind of impossible societal norm is anyone’s guess. It is our constant search for independence in love that seems ever elusive.

Holy Other’s take on love smacks of intellectual maturity, accurately reflecting the modern dilemma of the demands for aspiration and expectation still there from more conservative elements of society and the push towards more individual takes on what that actually means and looks like in a relational sense. It’s also an intensely personal document of how an essentially shy young man makes individual sense of the expectations and demands the dominant material culture of the modern western world puts on how people in relationships should behave. This review has, as can probably be ascertained, taken on the form of a personal catharsis of sorts. That Held enables such a personal interpretation of love and relationships without it once uttering a word of certainty speaks volumes for Holy Other’s manifest ability to allow his music as art to be interpreted so broadly. Subordinating the self while wearing your heart on your sleeve is no mean feat. One things for sure though, while this is an album about love and relationships, it’s pretty clear that not all is smooth sailing in the intensely private and insular world of its protagonist.

From the album, ‘Held’, Tri-Angle.