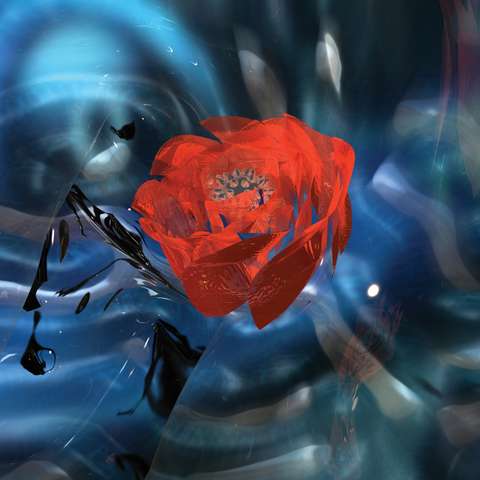 RECORD REVIEW: TEENGIRL FANTASY – TRACER
On Tracer, Nick Weiss and Logan Takahashi, aka Teengirl Fantasy, have left behind the samples that abounded on their previous effort 7AM in favour of a record that comprises exclusively original material. It has to be said its a good move, as Tracer highlights their ability to develop and curate caringly sculptured and restrained tracks that range in influence from the employment of their unique take on classic house, Detroit inspired techno, soul, R&B and IDM mixed in with Indigenous influences in the form of Andean pipe music. Within its joyous pop like prism, these elements are all washed together with with a sense of restraint, yet glowing ambience and not unlike 7AM, the record has a auroric feel.

Upon the first couple of spins, Tracer does not readily reveal itself. Bar its experimental and restless beats, which initially may serve to annoy, it comes across on the surface as somewhat innocuous. Repeated listens however will reveal that it is anything but. It actually becomes quite an addictive ride with previously unnoticed aspects coming alternatively to the fore each time. That’s the special thing about Tracer. Its unwillingness to allow restraint to become pedestrian indicates an acute awareness of how important it is that intent marries fruition. While musically, it may not be instantly received, there is also a definitely immediacy to the record in a production sense, derived from the fact that at its heart, it was recorded live.

The sparkling and restless introductory moments that usher in the opening track, ‘Orbit’, are indications of what is to come. The track ends having kept its listener in a state of suspension as it builds and builds and never blows – a feature of the record as a whole. It ushers in a seamless move into ‘EFX’ a track that revolves around the soul driven, emotive voice of Los Angeles singer Kelela Mizanekristos. It’s reliance of percussive elements rather than a forefronted beat itself allows the vocals to shine in a variety of forms, whether they be in their quieter moments or the triumph that is the chorus. These aspects make the track an absolute stunner. The beat sits up front and centre on ‘Eternal’ as Andean pipes wind in and out of the four to the floor pitch driven house action. Noah Lennox guests on ‘Pyjama’. The combining of the omnibus like cacophonic sounds of Panda Bear with the detailed and disciplined yet washed out disposition of Weiss and Takahashi’s embellishments is fascinating. Laurel Halo contributes to the mesmerising yet restrained beauty of ‘Mist of Time’. It’s organic beat sitting nicely, yet somewhat jarringly against the vocal arrangement. That it works is evidence of Teengirl Fantasy’ musical chops.

‘End’ begins Tracer’s second side, replete with Andean pipe, electronic piano and a xylophonic base for the beat. Percussive elements and synth flourishes are added incrementally and sporadically to create appropriate effect. A drawn out keyboard sound completes the early morning mood. ‘Vector Spray’ percussive and beat work shuffles along perfectly up against the oscillating urgency of the synths, effects and flourishes. ‘Inca’, an appropriate reference to the debt the album owes its South American influences, has an adventurous jungle like feel and just as you get settled in to the visions this creates along comes Romanthony, of Daft Punk ‘One More Time’ fame on the overwhelmingly classic house inspired ‘Do It’. But rather than groove, the track positively pumps almost stomp like throughout apart from its introspective like bridge. The album closes with the appropriate ‘Timeline’, a track that continues the beat driven trajectory of the previous one, albeit in a far more restrained manner.

This is an intelligent record. Weiss and Takahashi employ their transitory and experimental tendencies and musical sophistication to great effect without coming across and insular or impervious to their audience. If that audience is willing to invest just a little of their time in Tracer, they will understand that its protagonists are not standoffish navel gazers. Tracer is an outward looking album gifting its listeners the opportunity to create their own visions. And these creations had better come quickly. That the album extends less that 40 minutes suggests a determination on the part of the duo to get in and get out quick, do the business without overstaying their welcome; another example of understanding their audience. This is no easy task; that Teengirl Fantasy have been able to combine their penchant for transition and experimentation with being accessible to those with an open, intelligent musical mind means Tracer will continue to be vital and important in the realm of electronic music in the years to come.

From the album, ‘Tracer’, True Panther/R&S.

**We reviewed the new album, ‘Held’ by Holy Other a few days back. Listen to Teengirl Fantasy’s take on the track ‘Love Some1’ featuring Kelela.