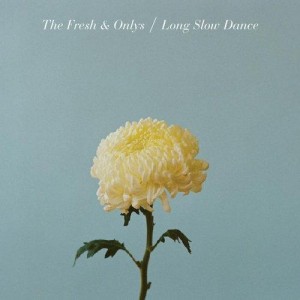 RECORD REVIEW: THE FRESH & ONLYS – LONG SLOW DANCE
Long Slow Dance is San Francisco art pop outfit The Fresh & Onlys fourth full length in just five years. This is in combination with the additional release of two EP’s and the peddling a stack of 7″ singles on a variety of labels over that time. Within their first twelve months, they had produced two full length albums, their more rock inspired self titled debut in 2008 and the turn towards more melodic tendencies, albiet them being employed within the prism of 70s west coast psychedelia on the more pop inspired Grey-Eyed Girls in 2009. Their break out record, 2010’s Play It Strange saw them move out of the DIY approach and into the studio and brought their unique take on merging rock, pop and folk further to the fore. Last year saw the Secret Walls EP released on east coast Brooklyn based label Sacred Bones which laid the path nicely for their latest record, the aforementioned Long Slow Dance.

Long Slow Dance sees them build on the more crisper production values they’ve sought to employ since coming out of the home recording paradigm. Every musical element is on full show. There’s no hiding of the flourishes and subtle licks that were often overwhelmed by the whole. Long Slow Dance puts them front and centre. Unlike their fellow San Fransican bretheren who they are often, somewhat mistakenly, associated with, Thee Oh Sees, Sic Alps, Ty Segall etc., who continue to effectively trade their pysch and garage tendencies in DIY dirge like sudgy realism, The Fresh & Onlys are unabashedly pop minded. Most of their tracks conform to the verse, chorus, verse approach, but to simply leave them there in any analysis would be missing some pretty obvious departures.

This record can be taken in two parts essentially. The A side contains some classic pop moments with three of the first four tracks (the singles), sparkling expansive reverb laden opener ’20 Days & 20 Nights’, the intensely melodic ode to relationship frustration ‘Yes Or No’ and the straight forward yet lyrically cryptic ‘Presence Of Mind’ being fast paced ditties that hardly touch the ground. That doesn’t mean there isn’t space to reflect on frontman Timothy Cohen’s conflicted and troubled take on relationships as the opening track exemplifies. Wymond Miles and Cohen himself provide the perfect melody on guitar and piano respectively to allow that to occur.

The title track sports the telling lines, ‘You supply the innocent mind and I’ll bring the guilty heart’…you be the purest of wine and I’ll be the dirty cup…and we’ll make the perfect romance’. Indeed, Long Slow Dance is one long cautionary tale of the apparent futiliy of attempting to triumph over uncertainty and learning to live with it. And the difficulty of managing self concept in presenting to that special other. This often comes in the form of the self-deprecation on display above. The slow burning ‘Dream Girls’ is further evidence, ‘You can have everything in the world, but you’ll never hang on to dream girl’. Cohen seems to exort us to plant our roots in reality.

The second side sees the quartet in its more experimental light with nods to approaches employed in past releases. Mariachi like Latin influences appear in the latter half of ‘Executioners Song’ while ‘Euphoria’ rocks out with its punk like disposition replete with orchestral like synth flourishes. ‘Foolish Person’ is the longest track on the record, virtually doubling the three minute diet of the others. Cohen here is determined to learn from past mistakes, ‘You called me a fool once, but you would not say it twice’. The track takes a dramatic turn, becoming a reverb drenched wall of pyschedelic new wave like sound, almost like a cartharsis of sorts. It’s an indication that while Cohen, writing partner Shayde Sartin Miles and Kyle Gibson wanted to make a disciplined record, their earlier tendencies to get loose have not been completely diminished.

While mostly Long Slow Dance might be the result of a determination to put polish on past releases, there undoubtedly is nods to The Fresh & Onlys lo-fi roots. That’s one of the pleasurable aspects of the record. This band might see themselves as serving art in one form or another but put simply and as Sartin himself has said, “we’re still slugging away”. The record itself was still recorded on tape. As found in Cohen’s self-deprecating lyrics, the band might have been determined to produce a tighter more focused record and in that they’ve succeeded. But in the end, Cohen, Sartin and company seem acutely aware that they’ve simply made 40 odd minutes of pure reflective pop that they hope is well received under their own terms. They needn’t be concerned on that score.