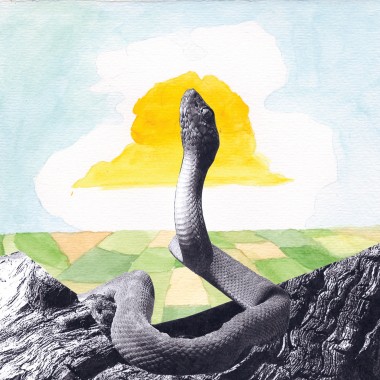 Brooklyn quartet Woods have given us seven releases in seven years, a range of folk-driven often-melancholic ponderings of our place in this twenty first century world. Known for their lo-fi sound, this seventh LP sees the band take a leap forward both in production and substance. Bend Beyond has a more optimistic sound than previous albums and where the previous recordings saw them going on long jamming tangents (2011’s Sun And Shame had around twenty minutes of instrumentals, nearly half the album) this new offering is tight, full of light and a joy to listen to.

The sound of open expanse rather than inner city could be a way to describe what we have here, something to listen to with the roof down cruising down the highway to somewhere sweet under a golden sunset. Founder Jeremy Earl has a voice that feels channeled straight from the 60s, and on this LP is moved forward in the mix, rather than being buried under the layers of the lo-fi gauze as in earlier recordings. The delivery is more precise, more channeled.

Multi instrumentalist Jarvis Taveniere gels with Earl to create a synergy that is tight and fluid, a step above their recordings of earlier times. New drummer, Aaron Neveu brings new life to Woods. The album was put together at Earls home in upstate New York. He has said of recording it; (they went) into the sessions of ‘Bend Beyond’ with plans to eschew the spontaneity of their earlier work. A more crafted piece has emerged, and has produced a gorgeous collection of tracks at times polished and refined, yet also with a feeling of having of nostalgia and warmth.

Harmonies in full flight venturing into pure psychedelic bliss-outs are found on Bend Beyond, and all radiate with sunshine. ‘Cali In A Cup’ was the lead single, and is a bright and joyous song, with beautiful harmonica making it all the richer. ‘Is It Honest’ shows Earl’s skill as songwriter, with a strong chorus as he sings “But it’s so fucking hard.” sounding somewhat like the Byrds Roger McGuinn.

‘It Ain’t Easy’ laments the death of someone close. “It gets hard without much to say / I piled stones in lieu of your grave” and “lookin’ for different ways to make things stay the same” the guitar strings are beautiful in this song. The feeling soon changes as we move or rather crash into the next track, ‘Cascade’. A wall of white noise begins this infectious instrumental which is over all too soon at just under two minutes in length. ‘Back To The Stone’ Cowboy Western landscape sounds less folky than a lot of other offerings on Bend Beyond, almost reminiscent of The Shins in places.

‘Impossible Skys’ is a delight with its accent on the two and four, ‘Find Them Empty’ begins hard with a keyboard riff that balances the guitars in this album highlight. ‘Lily’ has a hippy atmosphere about it, full of nostalgia in a track that is split down the centre, beginning with a melody of pure pop and turning into a layered complex acoustic and percussive mix to complete it… “What a wonderful waste / oh those were the days”. ‘Something Surreal’ has off kilter drums creating a weird sense of unease, as these time signatures are want to do, and it works like a charm. Beauty in dark moments is what this album is all about. It is full of hope and confidence, and an album that is immensely listenable.

Back To The Stone

From the album, ‘Bend Beyond’, Woodsist / Remote Control Records

Cali In A Cup

From the album, ‘Bend Beyond’, Woodsist / Remote Control Records